The Provisional Confederate States Congress met at Montgomery, Alabama, on February 4, 1861. A provisional constitution was adopted on February 8, 1861.

Article II Section 1(1) reads: "The executive power shall be vested in a President of the Confederate States of America. He and the Vice President shall hold their offices for the term of six years; but the President shall not be re-eligible."[2]

Article VII Section 1(2) includes instructions for electing permanent officials after the ratification of the Confederate Constitution:

When five states shall have ratified this Constitution, in the manner before specified, the Congress under the Provisional Constitution, shall prescribe the time for holding the election of President and Vice President; and, for the meeting of the Electoral College; and, for counting the votes, and inaugurating the President.[2]

Davis and Stephens ran without opposition.

The election simply confirmed the decision that had been made by the Provisional Confederate Congress earlier in the year. Davis remained president until May 5, 1865, when the Confederate government was officially dissolved.[3]

(a) Totals reflect the popular vote in North Carolina only.
(b) Missouri and Kentucky did not participate in this election. Missouri was admitted November 28, 1861 and Kentucky December 10, 1861. 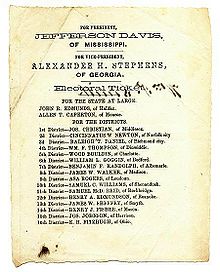 The Confederate States Electoral College was the institution that elected the president (Jefferson Davis) and vice president (Alexander H. Stephens) for a six-year term without possibility of re-election for the President.

The president and vice president were not elected directly by the voters. Instead, they were elected by electors who were chosen by popular vote on a state-by-state basis. This system was established by the Confederate States Constitution, in emulation of the United States Constitution. Like the U.S. Constitution, the Confederate Constitution provided that each state would have a number of electors "equal to the whole number of Senators and Representatives to which the State may be entitled in the Congress" (Article II, Section 1).

The Electoral College consisted of 109 electors.[4] The electors (chosen in the November 6 elections) met in their respective states to cast their votes on December 4, 1861 (Confederate law mandated that electors meet on the first Wednesday in December). The Congress met in joint session on February 19, 1862 and certified the result.[5]

Retrieved from "https://en.wikipedia.org/w/index.php?title=Confederate_States_presidential_election&oldid=947718060"
Categories:
Hidden categories:
The article is a derivative under the Creative Commons Attribution-ShareAlike License. A link to the original article can be found here and attribution parties here. By using this site, you agree to the Terms of Use. Gpedia Ⓡ is a registered trademark of the Cyberajah Pty Ltd.