Congress of the Philippines

Jump to navigation Jump to search
National legislature of the Philippines
‹ The template Infobox legislature is being considered for merging. › 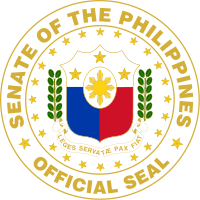 Seal of the Senate 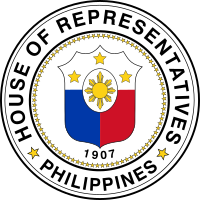 Seal of the House of Representatives

The Congress of the Philippines (Filipino: Kongreso ng Pilipinas) is the national legislature of the Philippines. It is a bicameral body consisting of the Senate (upper chamber), and the House of Representatives (lower chamber),[1] although colloquially, the term "congress" commonly refers to just the latter.

The Senate is composed of 24 senators[2] half of which are elected every three years. Each senator, therefore, serves a total of six years. The senators are elected by the whole electorate and do not represent any geographical district.

The Constitution provides that the Congress shall convene for its regular session every year beginning on the 4th Monday of July. A regular session can last until thirty days before the opening of its next regular session in the succeeding year. The President may, however, call special sessions which are usually held between regular legislative sessions to handle emergencies or urgent matters.[5]

The Illustrados' campaign transformed into the Philippine Revolution that aimed to overthrow Spanish rule. Proclaiming independence on June 12, 1898, President Emilio Aguinaldo then ordered the convening of a revolutionary congress at Malolos. The Malolos Congress, among other things, approved the 1899 Constitution of the Philippines. With the approval of the Treaty of Paris, the Spanish sold the Philippines to the United States. The revolutionaries, attempting to prevent American conquest, launched the Philippine–American War, but were defeated when Aguinaldo was captured on 1901.[7]

In 1916, the Jones Law changed the legislative system. The Philippine Commission was abolished, and a new bicameral Philippine Legislature consisting of a House of Representatives and a Senate was established.[10]

The legislative system was changed again in 1935. The 1935 Constitution, aside from instituting the Commonwealth which gave the Filipinos more role in government, established a unicameral National Assembly. But in 1940, through an amendment to the 1935 Constitution, a bicameral Congress of the Philippines consisting of a House of Representatives and a Senate was created. Those elected in 1941 would not serve until 1945, as World War II erupted. The invading Japanese set up the Second Philippine Republic and convened its own National Assembly. With the Japanese defeat in 1945, the Commonwealth and its Congress was restored. The same set up will continue until the Americans granted independence on July 4, 1946.[11]

As early as 1970, Marcos had convened a constitutional convention to revise the 1935 constitution; in 1973, the Constitution was approved. It abolished the bicameral Congress and created a unicameral National Assembly, which would ultimately be known as the Batasang Pambansa in a semi-presidential system of government. The batasan elected a prime minister. The Batasang Pambansa first convened in 1978. [13]

Marcos was overthrown after the 1986 People Power Revolution; President Corazon Aquino then ruled by decree. Later that year she appointed a constitutional commission that drafted a new constitution. The Constitution was approved in a plebiscite the next year; it restored the presidential system of government together with a bicameral Congress of the Philippines. It first convened in 1987.[14]

Main article: List of legislatures of the Philippines
Party control of Congress

Senate
The Senate, when it is in existence, is always composed of 24 senators, including vacancies. The 1935 constitution abolished the Senate, but a 1940 amendment restored bicameralism. The 1978 constitution, the Senate was abolished a new in favor of a unicameral parliament; it was restored with the approval of the 1987 constitution.

House of Representatives
The House of Representatives (National Assembly/Batasang Pambansa) originally had 98 members; the 1935 Constitution limited the membership to 120. The adoption of the 1973 Constitution raised the membership to 200, while the 1987 constitution allowed increases from the 250-seat limit by means of statutes.
Members of Congress often switch parties in favor of the ruling president after the election in what is locally known as the Padrino System or patronage politics; this phenomenon is more pronounced in the lower house, causing the president to automatically hold at least one chamber at any given time.

The powers of the Congress of the Philippines may be classified as:

It is essential to the effective exercise of other powers expressly granted to the assembly.[citation needed]

These are the powers which though not expressly given are nevertheless exercised by the Congress as they are necessary for its existence such as:

It has reference to powers which the Constitution expressly and specifically directs to perform or execute.

Powers enjoyed by the Congress classifiable under this category are:

Powers of the Congress that are executive in nature are:

The Congress of the Philippines exercises considerable control and supervision over the administrative branch - e.g.:

Considered as electoral power of the Congress of the Philippines are the Congress' power to:

Constitutionally, each house has judicial powers:

The other powers of Congress mandated by the Constitution are as follows:

The Member or the Bill Drafting Division of the Reference and Research Bureau prepares and drafts the bill upon the Member's request.

The vote requirements in the Congress of the Philippines are as follows:

In the Philippines, the most common way to illustrate the result in a Senate election is via a tally of candidates in descending order of votes. The twelve candidates with the highest number of votes are elected.

To determine the winning parties in the party-list election, a party must surpass the 2% election threshold of the national vote; usually, the party with the largest number of votes wins the maximum three seats, the rest two seats. If the number of seats of the parties that surpassed the 2% threshold is less than 20% of the total seats, the parties that won less than 2% of the vote gets one seat each until the 20% requirement is met.

The Legislative Building during the 1930s. 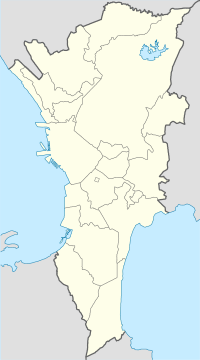 Ayuntamiento
Locations of the historical (blue) and current (red) seats of Congress in Metro Manila.

In what could be a unique setup, the two houses of Congress meet at different places in Metro Manila, the seat of government: the Senate sits at a building shared with the Government Service Insurance System (GSIS) at Pasay, while the House of Representatives sits at the Batasang Pambansa Complex.

The Barasoain Church in Malolos, Bulacan served as a meeting place of unicameral congress of the First Philippine Republic.

Destroyed during the Battle of Manila of 1945, the Commonwealth Congress convened at the Old Japanese Schoolhouse at Sampaloc. Congress met at the school auditorium, with the Senate convening on evenings and the House of Representatives meeting every morning. Congress would return to the Legislative Building, which will be renamed as the Congress Building, on 1949 up to 1973 when President Marcos ruled by decree. Marcos built a new seat of a unicameral parliament at Quezon City, which would eventually be the Batasang Pambansa Complex. The parliament that will eventually be named as the Batasang Pambansa (National Legislature), first met at the Batasang Pambansa Complex on 1978.

With the overthrow of Marcos after the People Power Revolution, the bicameral Congress was restored. The House of Representatives inherited the Batasang Pambansa Complex, while the Senate returned to the Congress Building. On May 1997, the Senate moved to the newly constructed building owned by the GSIS on land reclaimed from Manila Bay at Pasay; the Congress Building was eventually transformed into the National Museum of the Philippines.

Retrieved from "https://en.wikipedia.org/w/index.php?title=Congress_of_the_Philippines&oldid=946026545"
Categories:
Hidden categories:
The article is a derivative under the Creative Commons Attribution-ShareAlike License. A link to the original article can be found here and attribution parties here. By using this site, you agree to the Terms of Use. Gpedia Ⓡ is a registered trademark of the Cyberajah Pty Ltd.