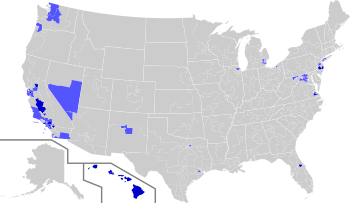 Rep. Katie Hill (D) (CA-25) was an associate member of the caucus until she resigned her seat in Congress on November 3, 2019.

Retrieved from "https://en.wikipedia.org/w/index.php?title=Congressional_Asian_Pacific_American_Caucus&oldid=999591485"
Categories:
Hidden categories:
The article is a derivative under the Creative Commons Attribution-ShareAlike License. A link to the original article can be found here and attribution parties here. By using this site, you agree to the Terms of Use. Gpedia Ⓡ is a registered trademark of the Cyberajah Pty Ltd.