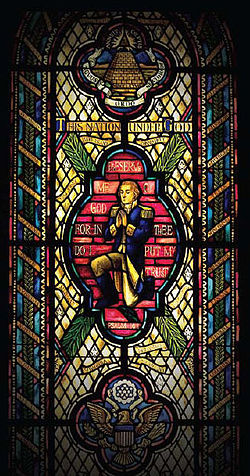 The Congressional Prayer Room near the rotunda in the United States Capitol is a place set aside for the use of members of Congress who seek a quiet place for meditation or prayer. The space is not open to tour groups or visitors to the Capitol.

The prayer room was established by Concurrent Resolution number 60 for the United States Senate and United States House of Representatives, passed in 1954, and officially opened in 1955.[1]

"Resolved by the House of Representatives (the Senate concurring), That the Architect of the Capitol is hereby authorized and directed to make available a room, with facilities for prayer and meditation, for the use of Members of the Senate and House of Representatives. The Architect shall maintain the Prayer Room for individual use rather than assemblies and he shall provide appropriate symbols of religious unity and freedom of worship."[2]

The official Congressional brochure describing the development of the Prayer Room credits a number of specific Congressional members with its establishment:

An interfaith or non-partisan design was integral to the vision of the prayer room so that it could be used by any Senator or Representative regardless of his or her faith.[1] To that end, an interfaith advisory committee was established, including the Chaplain of the Senate, the Chaplain of the House of Representatives, and since they were both Protestant, two additional members representing the Roman Catholic and Jewish faiths.[1]

The room includes a stained glass window of George Washington kneeling in prayer, with the words from Psalm 16:1, "Preserve me, O God, for in thee do I put my trust," and the words President Abraham Lincoln's Gettysburg address, "This Nation Under God".[1]

The designers of the Prayer Room felt that the image of Washington was particularly appropriate, given his words from his first inaugural address:

"...it would be peculiarly improper to omit in this first official act, my fervent supplications to that Almighty Being who rules over the universe, who presides in the councils of nations, and whose providential aids can supply every human defect, that His benediction may consecrate to the liberties and happiness of the people of the United States, a Government instituted by themselves for these essential purposes, and may enable every instrument employed in its administration to execute with success the functions allotted to his charge."[2]

In addition to an open Bible, the simple furnishings include two prayer benches, six chairs, two candles, plants, and an American flag.[1] The Congressional brochure notes the importance of both the symbolism and the color schemes employed in the Prayer Room:

"On the altar, two vases constantly filled with fresh flowers tell of the beauty of God's world. At the right and left are two candelabra, each with the traditional seven lights. An American flag is at the right of the altar. In front of each candelabrum is a plain prie-dieu or prayer bench, at which those who desire to do so may kneel. There are ten chairs facing the central window. The walls are pastel blue. The ceiling is the original painting, with cloud panels trimmed with gold. The rug is deep blue. The altar and prayer benches are of white oak. When illumined by the indirect lights of the shielded wall brackets, the room is a soft color harmony of blue and gold. Neither large enough for nor designed for a religious assembly, it is adequate for its avowed purpose --- a shrine at which the individual may renew his faith in his God and his loyalty to his country."[2]

In 2005, a group of congressional members began looking for a room in the Capitol large enough for voluntary group prayer, ultimately receiving permission to use Room 219.[3] Although many individuals and small groups use Room 219, the original group now tries to meet weekly and calls itself the "Congressional Prayer Caucus."[3]

In addition to spaces set aside for private or group prayer, the inclusion of a prayer before the opening of each session of both the House and the Senate traces its origins back to the days of the Continental Congress, and the official recommendation of Benjamin Franklin, June 28, 1787:

"I have lived, Sir, a long time, and the longer I live,

the more convincing proofs I see of this truth: that God Governs in the affairs of men. And if a sparrow cannot fall to the ground without his notice, is it probable that an empire can rise without his aid? We have been assured, Sir, in the sacred writings, that 'except the Lord build the House they labour in vain that build it.' I firmly believe this; and I also believe that without his concurring aid we shall succeed in this political building no better, than the Builders of Babel . . . I therefore beg leave to move— that henceforth prayers imploring the assistance of Heaven, and its blessings on our deliberations, be held in this Assembly every morning before we proceed to business, and that one or more of the Clergy of this City be requested to officiate

In its early days, the Capitol building was actually used for religious services in addition to governmental functions, with Sunday church services regularly held until after the Civil War. According to the Library of Congress exhibit "Religion/ and the Founding of the American Republic" "It is no exaggeration to say that on Sundays in Washington during the administrations of Thomas Jefferson (1801-1809) and of James Madison (1809-1817) the state became a church. Within a year of his inauguration, Jefferson began attending church services in the House of Representatives. Madison followed Jefferson's example, although unlike Jefferson, who rode on horseback to church in the Capitol, Madison came in a coach and four. Worship services in the House were acceptable to Jefferson because they were nondiscriminatory and voluntary. Preachers of every Protestant denomination appeared. (Catholic priests began officiating in 1826.)"[5]

Retrieved from "https://en.wikipedia.org/w/index.php?title=Congressional_Prayer_Room&oldid=874482183"
Categories:
The article is a derivative under the Creative Commons Attribution-ShareAlike License. A link to the original article can be found here and attribution parties here. By using this site, you agree to the Terms of Use. Gpedia Ⓡ is a registered trademark of the Cyberajah Pty Ltd.