The Conservative Party of New York State is a political party founded in 1962. The Party was founded due to conservative dissatisfaction with the Republican Party in New York. Since 2010, the Conservative Party has held "Row C" on New York ballots—the third-place ballot position, directly below the Democratic and Republican parties—because it received the third-highest number of votes of any political party in the 2010, 2014, and 2018 gubernatorial elections.

U.S. Senator James L. Buckley has been the most prominent party nominee.

The Conservative Party of New York State was founded in 1962 by a group including J. Daniel Mahoney, Kieran O'Doherty, Charles E. Rice, Raymond R. Walker and Charles Edison, out of frustration with the perceived liberalism of the state's Republican Party. A key consideration was New York's fusion voting, unusual among US states, which allows individual candidates to appear on multiple party lines in the same election. The Liberal Party of New York, founded in 1944, had benefited from this system; the Conservative Party desired to balance the Liberal Party's influence. According to The New York Times, the party's support "came mainly from those who would later be called Reagan Democrats—working-class, urban and suburban, often Catholic.[2]

Prominent conservative author and commentator William F. Buckley Jr. ran for Mayor of New York City on the Conservative Party line in 1965, winning 13.4% of the vote.[3] A New York Times op-ed described the Buckley campaign as "a watershed campaign for the Conservatives, who gained heavy publicity and proved their strength in the overwhelmingly Democratic city."[2] In 1966, Conservative candidate Paul L. Adams obtained more than half a million votes in his race for Governor of New York,[4] winning Row C for the Party.[5]

In 1970, James Buckley, the brother of William F. Buckley Jr., ran for U.S. Senate as the candidate of the Conservative Party. Running only on the Conservative Party line and the Independent Alliance Party line, Buckley defeated Democratic Congressman Richard Ottinger and unelected incumbent Republican U.S. Senator Charles Goodell, receiving 39% of the vote.[6] Buckley served one term in the Senate.[7] According to the New York Post, "Buckley's victory cemented, for a time, an electoral coalition of urban, ethnic Democrats with rural and suburban Republicans—all disgusted with excessive taxation, runaway government spending and the decline of traditional values."[5] In 1976, Buckley ran for reelection to the U.S. Senate as the candidate of the Republican and Conservative parties, losing to Democrat Daniel Patrick Moynihan.[8]

In 1978, registered Conservative William Carney, a member of the Suffolk County legislature, was elected to the United States House of Representatives in New York's 1st congressional district, a long-time Democratic stronghold on Long Island, after winning the Republican primary and running on both party lines.[9] He eventually served four terms before retiring.[10]

In 1980, the Conservative Party endorsed Al D'Amato in a U.S. Senate race in which he successfully challenged incumbent Sen. Jacob Javits in a Republican primary.[11] D'Amato then narrowly prevailed in the general election over Democrat Elizabeth Holtzman; the 275,100 votes D'Amato received on the Conservative line exceeded his slim margin of victory.[12][13]

Herbert London was the Conservative Party's nominee for Governor of New York in 1990; that year, the party broke from the Republican Party, declining to cross-endorse Republican nominee Pierre Rinfret.[18][19] Conservatives leaders cited Rinfret's support for abortion, his perceived lack of seriousness about his candidacy, and his potential difficulties in attacking incumbent Democratic Governor Mario Cuomo on fiscal policies as reasons for their decision to support London instead.[20] London ran a strong campaign statewide and finished one percentage point behind Rinfret, while Democratic Governor Mario Cuomo easily won re-election.[21]

The party declined to endorse Republican Rudy Giuliani for Mayor of New York City in his successful 1993 and 1997 campaigns. In each of those elections, Giuliani accepted the endorsement of the Liberal Party. The Conservative Party endorsed George Marlin for Mayor in 1993 and left its line blank in the 1997 New York City mayoral race.[2][22][23]

In the 2006 race for governor, Conservative Party Chairman Michael Long endorsed John Faso, the former Assembly Minority Leader and Republican State Comptroller nominee in 2002.[30] Former Massachusetts Gov. Bill Weld also sought the Republican nod, but received lukewarm support from the Conservative Party due to his support of abortion and same-sex marriage; Weld considered running on the Libertarian Party ticket.[citation needed] Faso won the nomination at the Republican convention, defeating Weld, 61–39%.[31] Following the convention, Weld withdrew from the race as senior party officials (including state Republican chairman Stephen Minarik, who endorsed Weld) urged party unity.[32] In the general election, Faso was the nominee of both the Republican and Conservative parties,[33] but was defeated by Eliot Spitzer.[34] 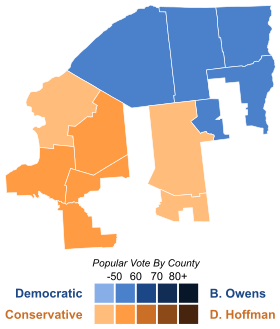 The Conservative Party nominated Republican candidates John McCain and Sarah Palin for president and vice president in the 2008 election, which was won by Democrat Barack Obama.[35] The graph shows how that ticket performed throughout the state.

The Conservative Party nominated Doug Hoffman for the 2009 special congressional election in the 23rd congressional district, an election won by the Democratic nominee, Bill Owens.[36] The Conservative Party chose Hoffman, a fiscal and social conservative, in reaction to the Republican Party's nomination of pro-choice, pro-same-sex-marriage, pro-union Assemblymember Dede Scozzafava, who Chairman Mike Long declared to be a "nice lady who is too liberal."[37] On October 31, 2009, Dede Scozzafava suspended her campaign,[38] leading prominent Republicans such as national chairman Michael Steele to endorse Hoffman.[39] The final election results showed that Owens prevailed over Hoffman by a margin of 48.3% to 46%.[40] According to one commentator, "tea party conservatives see the GOP loss as a victory for conservativism over mere political party loyalty. They’re describing the defeat as a warning shot fired in defense of principle."[41] In addition, elected officials and observers opined that the congressional race affected the New York State Senate's December 2, 2009 vote against same-sex marriage legislation.[42][43]

Party Chairman Michael Long publicly endorsed Rick Lazio for the 2010 New York gubernatorial election, and directed his allies to do the same. However, several county chairmen refused, and coalesced behind vice chairman Ralph Lorigo to assure Lazio would have a Conservative Party primary opponent. Long sent a letter demanding Lorigo to either cease his gubernatorial campaign or resign his position within the party, accusing him of being a stalking horse for another candidate, Carl Paladino, whom Long refused to consider (an allegation that Lorigo publicly denied, though his campaign was run by family members of the Paladino campaign). Long did not state any consequences for refusing to do so.[44] Lazio defeated Lorigo in the primary election by a roughly 60–40% margin, though write-in candidates were significant in several upstate counties, many of which voted for Lorigo over Lazio. Paladino defeated Lazio in the Republican primary. Afterwards, Long barred Lorigo from party meetings.[45] Lazio dropped out of the race on September 27, requiring a vacancy committee to convene and select a replacement; Lorigo claims that Suffolk County chairman Ed Walsh held a meeting among his party's members that claimed a 90 percent support rate, at odds with Long's claims.[46] Long eventually endorsed Paladino, and the vacancy committee followed, placing Paladino on the line. Paladino eventually drew 232,264 votes on the Conservative Party line,[47] which allowed the party to overtake the Independence Party of New York and retake Row C (the third place ballot position in New York elections) for the first time since the 1998 elections.[48]

Prior to the passage of same-sex marriage legislation in 2011, Long stated that the party would not endorse any candidate who supported same-sex marriage.[49][50] Four Republican state senators—Sens. James Alesi, Mark Grisanti, Roy McDonald, and Stephen Saland—voted in favor of same-sex marriage. Alesi did not seek re-election in 2012,[51] while Grisanti, McDonald, and Saland faced challengers in 2012 who received the Conservative Party's endorsement. Grisanti was re-elected to the State Senate,[52] while McDonald was defeated in a Republican primary[53] and Saland was defeated in a general election in which a Conservative Party-endorsed challenger acted as a spoiler.[54]

State Senator Mark Grisanti, the last remaining Republican state senator to have voted for the Marriage Equality Act, was again denied Conservative Party endorsement in 2014; the party instead endorsed dummy candidate Timothy Gallagher in State Senate District 60. Grisanti lost the Republican primary, but remained in the general election on the Independence line. In the general election, Gallagher—despite not campaigning at all—won 8 percent of the vote; the vote split between Gallagher, Grisanti, and Republican candidate Kevin Stocker allowed Democrat Marc Panepinto to win the election with only 34 percent of the vote.[55][56]

The party endorsed Rob Astorino very early in the 2014 gubernatorial election process.[57] In the election for New York State Comptroller, the party threatened to nominate its own candidate if the Republicans could not find a candidate from their party to run on the line;[58] the GOP eventually nominated Onondaga County Comptroller Rob Antonacci.[59]

In 2016, the Conservative Party nominated eventual winner Donald Trump for President of the United States.[60]

On April 13, 2018, the Conservative Party executive committee selected Marcus Molinaro as its candidate in the 2018 gubernatorial election in what Long termed a "not very easy" decision; the party chose Molinaro over Deputy State Senate Majority Leader John A. DeFrancisco and openly refused to consider Erie County Executive Joel Giambra.[61]

The Conservative Party of Cattaraugus County is alleged to have been the target of a hostile takeover by members of the Republican Party, after 37 former Republicans abruptly changed party registration in October 2017. County party chairman Leonard Ciros alleged that the Republican Party violated state party loyalty laws and the federal Racketeer Influenced and Corrupt Organizations Act.[62]

Long announced his retirement from the chairmanship of the Conservative Party on January 28, 2019 after having served in that role for 30 years.[63] In February 2019, he was elected Chairman Emeritus of the Party.[64] On February 23, 2019, the Party named Gerard Kassar of Brooklyn as its new chairman.[65]

As of February 2019, the Party is the fourth-largest political party in the State of New York, ranking behind the Democratic Party, the Republican Party and the Independence Party and ahead of the Working Families Party and the Green Party.[citation needed] Since 2010, the Party has held "Row C" on New York ballots—the third-place ballot position, directly below the Democratic and Republican parties—because it received the third-highest number of votes of any political party in the 2010,[66] 2014,[67] and 2018[68] gubernatorial elections.[69][70][71]

In 2012, The New York Times stated that the Conservative Party had "a successful electoral record in a decidedly blue state in which the Conservatives have elbowed the Republican Party to the right".[4] Also in 2012, the New York Post asserted that the Party had "helped the GOP maintain its majority in the state Senate, even as New York has turned an ever-deeper blue over the last half century" and added that it had "forced the state Republican Party to (sometimes) remember what it stood for—by threatening its power".[5]

Following the passage of same-sex marriage legislation in 2011, the Conservative Party stated that it would withdraw support for any candidate who had voted for the bill;[77][50] two Republican senators who voted for same-sex marriage—Roy McDonald and Stephen Saland—lost their seats in 2012.[53][54]

The party has also endorsed Democratic candidates, including controversial former Buffalo mayor and presidential candidate Jimmy Griffin, who was initially elected mayor solely on the Conservative ticket but had Republican support as well for his subsequent campaigns. It also cross-endorsed such Democrats as Asms. Michael Cusick,[78] Michael P. Kearns,[79] and Robin Schimminger[79] and former Capital District Congressman Michael McNulty.[80]

Retrieved from "https://en.wikipedia.org/w/index.php?title=Conservative_Party_of_New_York_State&oldid=966214563"
Categories:
Hidden categories:
The article is a derivative under the Creative Commons Attribution-ShareAlike License. A link to the original article can be found here and attribution parties here. By using this site, you agree to the Terms of Use. Gpedia Ⓡ is a registered trademark of the Cyberajah Pty Ltd.