Jump to navigation Jump to search
This article is about the former neighborhood in Atlanta. For the artificial hill in Copenhagen, see Amager Bakke. 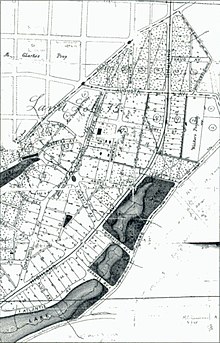 Article about first sale of lots, 1890

Copenhill, Copenhill Park, or Copen Hill was a neighborhood of Atlanta, Georgia which was located largely where the Carter Center now sits, and which now forms part of the Poncey-Highland neighborhood.

Copen Hill (as it was originally written) was the site of the Augustus Hurt house (often erroneously cited as "Howard House"),[1] which served as General Sherman's temporary headquarters during the Battle of Atlanta.[2]

In 1888, the Copenhill Land Company was incorporated with Oscar Davis as president and Charles A. Davis as secretary and treasurer; Lodewick Johnson Hill was one of the three owners.[3] The company laid out the city's second "garden suburb" (after Inman Park). The centerpiece was Madeira Park, which like Springvale Park in Inman Park, was created out of a natural ravine near the center of the development. Intersections of the curving streets were often defined by small circular or triangular parks similar to those found in Ansley Park today. Other open spaces were also included in the original design, most notably the small lake near the intersection of Layal (now Colquitt) Avenue and Highland Avenue, which was fed by a small branch that formed part of the headquarters of Clear Creek. The Copenhill developers cooperated with the Inman Park developers to insure both developments were finished to the greatest advantage of one another.[4]

In April 1890, Col. George W. Adair auctioned off the first lots of the new subdivision of "Copenhill Park", which thus became one of the first streetcar suburbs of Atlanta.[5] The area was attractive, among other reasons, for its accessibility to the Nine-Mile Circle streetcar line along Ponce de Leon Avenue, though streetcar service was later added on Highland Avenue. It lay:

In 1908 the area was annexed into the city of Atlanta.

In 1929 most of Copenhill was rezoned as an industrial area.[6] In the 1960s the area was razed to make way for the interchange of the I-485 freeway with the Stone Mountain and Georgia 400 freeways, which however were never built in this area. After laying vacant for many years, the Carter Center was finally dedicated in 1986. However, it was only in 1992 that the land originally razed to make way for a freeway was turned instead into a parkway (Freedom Parkway) and park land (Freedom Park).

A memory of the area's former existence as a neighborhood is retained in the name of the café at the Carter Center: the Copenhill Café and Patio.

Retrieved from "https://en.wikipedia.org/w/index.php?title=Copenhill&oldid=970040506"
Categories:
Hidden categories:
The article is a derivative under the Creative Commons Attribution-ShareAlike License. A link to the original article can be found here and attribution parties here. By using this site, you agree to the Terms of Use. Gpedia Ⓡ is a registered trademark of the Cyberajah Pty Ltd.