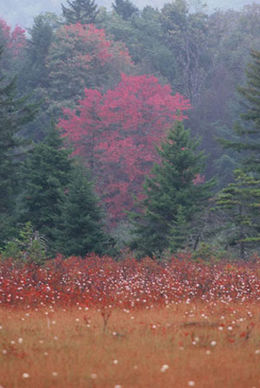 Cranberry Glades — also known simply as The Glades — are a cluster of five small, boreal-type bogs in southwestern Pocahontas County, West Virginia, United States. This area, high in the Allegheny Mountains at about 3,400 feet (1,000 m), is protected as the Cranberry Glades Botanical Area, part of the Monongahela National Forest. This site is the headwaters of the Cranberry River, a popular trout stream, and is adjacent to the nearly 50,000-acre (200 km2) Cranberry Wilderness.

The Glades are a 750-acre (3.0 km2)[1] grouping of peat bogs resembling some Canadian bogs. The gladed land is highly acidic and supports plants commonly found at higher latitudes, including cranberries, sphagnum moss, skunk cabbage, and two carnivorous plants (purple pitcher plant, sundew). The Glades serve as the southernmost home of many of the plant species found there.

In 1974, the Cranberry Glades Botanical Area was designated a National Natural Landmark.

The natural history of the Glades has been traced back at least 12,200 years. Apparently, a forest of conifer-northern hardwoods replaced tundra with the end of the last Ice Age. Over time the Glades formed into what it is today. Now, most of the bog is underlain by peat that is up to 10 feet (3.0 m) thick. Under the peat is a layer of algal ooze and the ooze by marl. Since a limestone source in the surrounding rocks is indicated, an ample source appears to be present in the underlying Hinton Formation, a circumstance that also has significant implications for the Glades' flora.

The area is not entirely a glade, but a bog or wetland covered with all sorts of decaying vegetation. The peat and decaying organic matter is more than ten feet thick under the dense plant cover. The ground is not as much as quicksand or swampy, but spongy. It is in a high valley, about 3,300 to 3,400 feet (1,005 to 1,036 meters) above sea level, surrounded by the Cranberry, Kennison, and Black Mountains.

Darlington's studies showed that the Glades were formed by easily eroding rocks in the basin and more resistant rock at its lower end. This effectively prevented down-cutting and maintained a low gradient in the valley. This resulted in an elevation of 3,400 ft (1,000 m) at the upper end and 3,350 ft (1,020 m) at the back, eliminating the possibility of origin by water impoundment.

The water from the Glades drains to form the headwaters of the Cranberry River, a popular trout stream joined by the Yew and Charles Creeks. It starts at about 4,600 feet (1,400 m) above the sea, and then it meanders through the glades and recedes through a narrow gap between Kennison and Black Mountains. It then joins the Gauley River 25 miles (40 km) down the mountains at about 1,920 feet (590 m) above sea level.

Many of the plants found in the Glades resemble those in the northern region of North America. They are descendants of seeds that took root over ten thousand years ago before the last glacial retreat. Among these are two unusual species of carnivorous plants that thrive in the area — the purple pitcher plant and native sundew. They evolved carnivorous habits because of the scarce root food in the spongy soil. Two very rare boreal plants — bog rosemary and buckbean — also live in the 59-acre (240,000 m2) Big Glade. Much of the area provides a home for many species of mosses. These include a cover of sphagnum moss, bird-wheat moss, bog moss and reindeer lichen. Hummocks of these plants reach a height of 3 feet (0.91 m). Over top of these grow prostrate cranberry vines that bloom nice pink flowers in the summer and a bunch of fruits in late September.

The Glades' shrub layer, unlike the tree layer, is relatively species-rich. This is a consequence of the widespread presence of low- to medium-height woody plants throughout shrub swamps, forest habitats, and open glades. In the fringes of open glades and along streams, the dominant species is usually speckled alder. Also common are willow, pipestem, glade St. Johns-wort, great rhododendron, hobblebush, smooth arrowwood, wild raisin, ninebark, alternate-leaved dogwood, bunchberry, winterberry holly, mountain holly, swamp rose, the Appalachian endemic longstalked holly and many more. Most of these shrubs have markedly northern distributions, and bog rosemary and oblongfruited serviceberry are at their southernmost limits of distribution. The Canada yew is an uncommon evergreen shrub that was historically reported as abundant in the area.[2][4][6] Nearby Yew Creek is presumably named for this species, as may be the broader Yew Mountains region in which the Glades are located. Browsing deer have reduced the number of Canada yew to such an extent that it is found only in scattered locations throughout its Central Appalachian range,[7] including here.

Many animals that live in the Glades are at their southernmost breeding grounds, including birds such as the Swainson’s and hermit thrushes, Nashville and mourning warblers, and purple finches. Other, less exotic, birds like ravens and hawks are common. Other familiar animals including whitetail deer inhabit the Glades. Black bears have been seen in the skunk cabbage growing along the boardwalk. In the evening, you have a good chance of hearing beavers working; they are mostly inactive during the day. It is hard to see the beavers because of little light, and they are dark colored. They also reside submerged or are building their homes.

Like many of the adjoining areas high in the Alleghenies, Cranberry Glades is known for frequent weather changes. Generally speaking, the area is cool and wet, comparable to the climates of New England and Canada. This can be explained by the biome which this area is set in, the Temperate Deciduous Forest. Biomes are defined by common flora and fauna types and by certain types of consistent weather patterns. Higher mountains surround the Glades form a bowl, draining their cool air downhill to the Glades.

Today, Cranberry Glades serves as a major tourism stop along the Highland Scenic Highway corridor. Near the Glades is the Cranberry Mountain Nature Center providing interpretive services. Within the Glades area itself, Monongahela National Forest has constructed a 0.5-mile (0.80 km) boardwalk that traverses the edge of some bogs and a small wooded section. The entire Glades area itself is traversed by Cowpasture Trail, a 6.0-mile (9.7 km) improved hiking path that serves as the border between the Cranberry Glades Botanical Area and the much larger Cranberry Wilderness. Due to the ecologically-sensitive nature of the area, visitors are not permitted to leave these developed paths within the Glades.

Retrieved from "https://en.wikipedia.org/w/index.php?title=Cranberry_Glades&oldid=964658955"
Categories:
Hidden categories:
The article is a derivative under the Creative Commons Attribution-ShareAlike License. A link to the original article can be found here and attribution parties here. By using this site, you agree to the Terms of Use. Gpedia Ⓡ is a registered trademark of the Cyberajah Pty Ltd.