Cuisine of the Southern United States 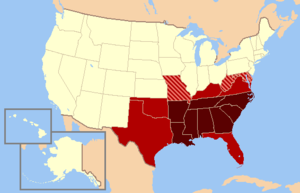 The cuisine of the Southern United States developed in the traditionally defined American South. Tidewater, Appalachian, Cajun, Creole, Lowcountry, and Floribbean are examples of types of Southern cuisine. In recent history, elements of Southern cuisine have spread north, having an effect on the development of other types of American cuisine.

Many elements of Southern cooking—squash, corn (and its derivatives, including grits), and deep-pit barbecuing—are borrowings from southeast American Indian tribes such as the Caddo, Choctaw, and Seminole. Sugar, flour, milk, and eggs were among the ingredients that arrived from Europe with the early American colonists, while black-eyed peas, okra, rice, eggplant, sesame, sorghum, and melons, as well as most spices used in the South came from Africa.[3]

The South's fondness for a full breakfast derives from the British full breakfast or fry-up. Many Southern foodways, especially in Appalachia, are Scottish or Border meals adapted to the new subtropical climate; pork, once considered informally taboo in Scotland, takes the place of lamb and mutton, and instead of chopped oats, Southerners eat grits, although oatmeal is much more common now than it once was.

Parts of the South have other cuisines, though. Creole cuisine is mostly vernacular French, West African and Spanish; Floribbean cuisine is Spanish-based with obvious Caribbean influences; and Tex-Mex has considerable Mexican and Native American influences.

See also: List of foods of the Southern United States

A traditional Southern meal is pan-fried chicken, field peas (such as black-eyed peas), greens (such as collard greens, mustard greens, turnip greens, or poke sallet), mashed potatoes, cornbread or corn pone, sweet tea, and dessert—typically a pie (sweet potato, chess, shoofly, pecan, and peach are the most common), or a cobbler (peach, blackberry, sometimes apple in Kentucky or Appalachia).

"White barbecue sauce" made with mayonnaise, pepper and vinegar is a Northern Alabama specialty usually served with smoked barbecue chicken.[4]

Pork is an integral part of the cuisine. Stuffed ham is served in Southern Maryland.[15] A traditional holiday get-together featuring whole hog barbecue is known in Virginia and the Carolinas as a "pig pickin'". Green beans are often flavored with bacon and salt pork, turnip greens are stewed with pork and served with vinegar, ham biscuits (biscuits cut in half with slices of salt ham served between the halves) often accompany breakfast, and ham with red-eye gravy or country gravy is a common dinner dish.[16] Country Ham, a heavily salt-cured ham, is common across the Southern United States, with the most well known being the Virginia-originating Smithfield ham.[17]

Southern meals sometimes consist only of vegetables, with a little meat (especially salt pork) used in cooking but with no meat dish served. "Beans and greens"—white or brown beans served alongside a "mess" of greens stewed with a little bacon—is a traditional meal in many parts of the South. (Turnip greens are the typical greens for such a meal; they're cooked with some diced turnip and a piece of fatback.) Other low-meat Southern meals include beans and cornbread—the beans being pinto beans stewed with ham or bacon—and Hoppin' John (black-eyed peas, rice, onions, red or green pepper, and bacon).

Cabbage is largely used as the basis of coleslaw, both as a side dish and on a variety of barbecued and fried meats.[18] Sauteéd red cabbage, flavored with vinegar and sugar, is popular in German-influenced areas of the South such as central Texas.

Butternut squash is common in winter, often prepared as a roasted casserole with butter and honey. Other typical vegetable sides include collard greens and congealed salads. Double stuffed potatoes with barbecue pork, cheddar cheese, cream cheese, mayonnaise and chives are served at barbecue restaurants throughout the South.[4]

Country Captain is a regional dish of curry chicken and rice that dates back to at least the 1920s. It became well known after a Columbus, Georgia cook served the dish to then President Franklin D. Roosevelt. George Patton once said "If you can't give me a party and have Country Captain, meet me at the train with a bucket of it."[4]

Georgia is known for peach cultivation and variations of Peach melba are commonly served as desserts. Chess pie is a traditional pastry made with eggs, butter and sugar or molasses.[19] Bananas foster is a specialty of New Orleans.[4].

Gulf seafood like black grouper, shrimp and swordfish can be found, and "channel catfish" (Ictalurus punctatus) farmed locally in the Mississippi Delta region is especially popular in Oxford, Mississippi. Fried catfish battered in cornmeal is commonly served at local establishments with hot sauce and a side of fries and coleslaw. Oysters Rockefeller is a New Orleans specialty, believed to have originated in the state. Cajun-influenced dishes like gumbo and jambalaya often feature crawfish, oysters, blue crab and shrimp.[4] 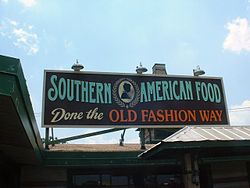 "Southern cuisine" is recognized by many Americans as suggested by this sign on a restaurant in the Florida Panhandle. 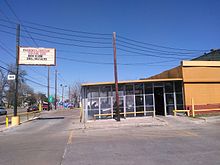 Chains serving Southern foods—often along with American comfort food—have had great success; many have spread across the country or across the world, while others have chosen to stay in the South. Pit barbecue is popular all over the American South; unlike the rest of the country, most of the rural South has locally owned, non-franchise pit-barbecue restaurants, many serving the regional style of barbecue instead of the nationally predominant Kansas City style. Family-style restaurants serving Southern cuisine are common throughout the South, and range from the humble and down-home to the decidedly upscale. 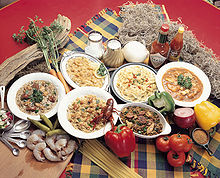 Southern Louisiana is geographically part of the South, but its cuisine is probably best understood as having only mild Southern influences. Creole cuisine makes good use of many coastal animals—crawfish (commonly called crayfish outside the region), crab, oysters, shrimp, and saltwater fish. Mirliton (chayote squash), is popular in Louisiana. Coffee blended with Chicory is sometimes preferred over pure ground—especially as an accompaniment to beignets.

The Lowcountry region of the coastal Carolinas and Georgia shares many of the same food resources as the Upper Gulf Coast: fish, shrimp, oysters, rice, and okra. It also displays some similarities to Creole and Cajun cuisines.

Because of its geographic location, Appalachia cuisine offers a wide range of ingredients and products that can be transformed using traditional methods and contemporary applications.[31] Staples of Appalachian cuisine that are common in other regional cuisines of the south include coconut cream cake, peanut brittle, sweet potato casserole, pork chops, biscuits and gravy, and chicken and dumplings. Basic soul food dishes like collard greens, hominy, cracklings and ham hocks are also common to the Appalachian kitchen.[32] European fruits—especially apples and pears—can grow in the mountains, and sweet fried apples are a common side dish. Appalachian cuisine also makes use of berries, both native and European, and some parts of the mountains are high enough or far enough north that sugar maple grows there—allowing for maple syrup and maple sugar production. Wild morel mushrooms and ramps (similar to scallions and leeks) are often collected; there are even festivals dedicated to ramps, and they figure in some Appalachian fairy tales. The diet included corn, beans, squash, mixed pickles, milk, cheeses, butter, cream, tea, and coffee.[32]

Nineteenth-century meals included greens fried in bear grease, elk backstrap steaks and venison stew. Ashcakes were cornbread cooked directly on hearth coals.[32] Cornbread was the most common bread in the mountains, and still remains a staple. Salt, a necessity for life, was always available (much of it coming from Saltville, Virginia), and local seasonings like spicebush were certainly known and used; but the only other seasonings used in the mountains are black pepper and flaked red pepper, along with a little use of cinnamon, nutmeg, and cloves around Christmas. Coffee, drunk without milk and only lightly sweetened, is a basic drink in Appalachia, often consumed with every meal; in wartime, chicory was widely used as a coffee substitute.

Rice and cane sugar, grown further south, were not easy to come by in Appalachia and generally sorghum, honey and maple syrup were used as sweetener in local dishes.[32] Travel distances, conditions, and poor roads limited most early settlements to foods that could be grown or produced locally. For farmers, pigs and chickens were the primary source of meat, with many farmers maintaining their own smokehouses to produce a variety of hams, bacon, and sausages. Seafood, beyond the occasionally locally caught fresh-water fish (pan-fried catfish is much loved, as is trout in the mountains of western North Carolina, East Tennessee, and Southwest Virginia) and crawfish, were unavailable until modern times. However, Appalachia did offer a wide variety of wild game, with venison, rabbit and squirrel particularly common, thus helping to compensate for distance from major cities and transportation networks. The popularity of hunting and fishing in Appalachia means that game and fresh-water fish were often staples of the table. Deer, wild turkey, grouse and other game birds are hunted and utilized in many recipes from barbecue to curing and jerky.[33]

Home canning, of both garden and foraged foods, is a strong tradition in Appalachia as well; mason jars are an everyday sight in mountain life; the most common canned foods are savory vegetables: green beans (half-runners, snaps), shelly beans (green beans that were more mature and had ripe beans along with the green husks), and tomatoes, as well as jam, jelly and local fruits. Dried pinto beans are a major staple food during the winter months, used to make the ubiquitous ham-flavored bean soup usually called soup beans. Kieffer pears and apple varietals are used to make pear butter and apple butter. Also popular are bread and butter pickles, fried mustard greens with vinegar, pickled beets, chow-chow (commonly called "chow"), a relish known as corn ketchup and fried green tomatoes; tomatoes are also used in tomato gravy, a variant of sausage gravy with a thinner, lighter roux. A variety of wild fruits like pawpaws, wild blackberries, and persimmons are also commonly available in Appalachia as well.[citation needed]

As wheat flour and baking powder/baking soda became available in the late 19th century, buttermilk biscuits became popular. Today, buttermilk biscuits and sausage gravy are the classic Appalachian breakfast; they are also a common breakfast everywhere where Appalachian people have emigrated. Both North Carolina and West Virginia have statewide biscuit chain restaurants;[34] many Southern or originally-Southern chains offer biscuits and gravy, and when McDonald's introduced a new breakfast menu selling either Egg McMuffins (with English muffins) or a variant with biscuits, the biscuit zone was practically a map of the South with the exception of Virginia, Maryland, and Florida.[35]

The gravy for biscuits and gravy is typically sausage or sawmill, not the red-eye gravy (made with coffee) used in the lowland South. Pork drippings from frying sausage, bacon, and other types of pan-fried pork are collected and saved, used for making gravy and in greasing cast-iron cookware. (Note that Appalachia is overwhelmingly Protestant, the Catholic prohibition on meat-eating during Lent had no impact on Appalachian cuisine.) Chicken and dumplings and fried chicken remain much-loved dishes. Cornbread, corn pone, hominy grits, mush, cornbread pudding and hominy stew are also quite common foods, as corn is the primary grain grown in the Appalachian hills and mountains, but are less common than in the past.

Retrieved from "https://en.wikipedia.org/w/index.php?title=Cuisine_of_the_Southern_United_States&oldid=970050463"
Categories:
Hidden categories:
The article is a derivative under the Creative Commons Attribution-ShareAlike License. A link to the original article can be found here and attribution parties here. By using this site, you agree to the Terms of Use. Gpedia Ⓡ is a registered trademark of the Cyberajah Pty Ltd.