The culture of South America draws on diverse cultural traditions from the continent of South America. These include the native cultures of the peoples that inhabited the continents prior to the arrival of the Europeans; European cultures, brought mainly by the Spanish, the Portuguese and the French; African cultures, whose presence derives from a long history of New World slavery; and the United States, particularly via mass culture such as cinema and TV.

Roman Catholicism is the dominant religion (over 80%-70% in Hispanic countries, some 65% in Brazil). French Guiana also has a large number of Protestants. Guyana and Suriname are exceptions, with three major religions: Christianity in general, Hinduism, and Islam. In lowland South America, as well as the Andes, animism and shamanism are common, as noted among the Urarina of Peruvian Amazonia. 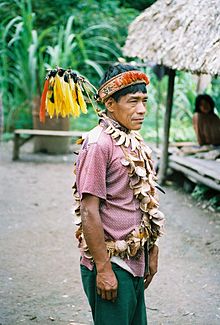 South American nations have a rich variety of music. Some of the most famous genres include samba from Brazil, tango from Argentina & Uruguay, and cumbia from Colombia.

Beyond the rich tradition of indigenous art, the development of South American visual art owed much to the influence of Spanish, Portuguese and French Baroque painting, which in turn often followed the trends of the Italian Masters. In general, this artistic Eurocentrism began to fade in the early twentieth century, as South Americans began to acknowledge the uniqueness of their condition and started to follow their own path.

Retrieved from "https://en.wikipedia.org/w/index.php?title=Culture_of_South_America&oldid=937834146"
Categories:
Hidden categories:
The article is a derivative under the Creative Commons Attribution-ShareAlike License. A link to the original article can be found here and attribution parties here. By using this site, you agree to the Terms of Use. Gpedia Ⓡ is a registered trademark of the Cyberajah Pty Ltd.