The park lies in parts of Bell and Harlan counties in Kentucky, Claiborne County in Tennessee, and Lee County in Virginia. The park contains the Kentucky-Virginia-Tennessee tri-state area, accessible via trail.

The Cumberland Gap Visitor Center is located on U.S. Highway 25E just southeast of Middlesboro, Kentucky and just northwest of the Cumberland Gap Tunnel and Cumberland Gap, Tennessee. The visitor center features a museum with interactive exhibits about the Gap's role as a transportation corridor, an auditorium that shows films about the area's cultural and natural history, a book store and the Cumberland Crafts gift shop with crafts from Appalachia.[2]

The park runs along the Cumberland Mountains, stretching about 20 miles (32 km) with an average width of 1.6 miles (2.6 km).[6] The park straddles a tri-state area encompassing land from Kentucky, Tennessee and Virginia.[3]:29 It includes the area of the Wilderness Road running through the passage across the Cumberland Plateau and through the Cumberland Gap, an important geological feature that facilitated travel for American settlers and Native Americans.[5]:13[7][6] It includes 24 known cave features ranging in size from around 20 feet (6.1 m) to more than 16 miles (26 km) in length.[4]:10[8]

Winter view from beneath the White Rocks cliffs, in the far eastern portion of the park

The park contains over 62 miles (100 km) of streams.[5]:xvii With the exception of one, Little Yellow Creek, all of these originate from within the park, with those to the north of the main ridge flowing into the Cumberland River, and those to the south flowing into the Powell River.[5]:16 Overall water quality in the park is good to fair, with some areas falling below recommended pH levels, likely due to natural causes, and others exceeding recommended levels of microorganisms, possibly due to contamination from campgrounds.[5]:46

The area of the park is 97% forested and contains 970 species of vascular plants, 90 of which are classified as sensitive or rare species.[5]:xvii These include 108 non-native species of plants, and 31 considered to be highly aggressive invasive plants.[5]:55[a]

The park is home to at least 145 species of birds, and 40 species of mammals, including the near-threatened bat, Myotis sodalis (Indiana bat).[5]:xvii The streams in the park house around 27 species of fish, including Chrosomus cumberlandensis (blackside dace), federally listed as an endangered species. Additionally, surveys have identified at least 36 species of reptiles and amphibians.[5]:xvii 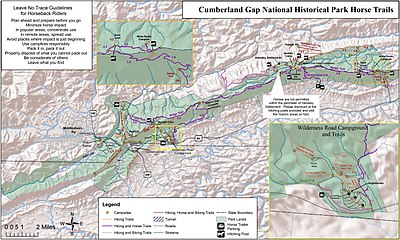 National Park Service map of horse trails within the park

Business leaders from Middlesboro, Kentucky meeting in Cincinnati for the Appalachian Logging Conference, proposed a Lincoln National Park, centered around Fern Lake as early as 1922.[5]:18[10] However, two bills introduced into the Kentucky State Legislature the following year by State Congressman John Robison both failed. Later attempts in 1929 sought to create memorials for Civil War battles fought in the area, and also failed. In 1938, the National Park Service agreed to support a park if the lands were donated to form one, and the Cumberland Gap National Historical Park Association was created, sparking more unsuccessful attempts in Kentucky, and then passage of a bill in Virginia in 1939 that paved the way for federal authorization.[5]:18[10]

In 1992 the park purchased the area surrounding Gap Cave, which had previously been privately owned.[4]:10 By 1996, the park had undergone some $280 million in improvements, including construction of the Cumberland Gap Tunnel.[4]:10

Toward the southern end of the park lies Fern Lake, created by an earthen dam in 1890, which provides water to the nearby town of Middlesboro, Kentucky.[12]:19 The area surrounding the lake was purchased by the park in four phases following the passage of the Fern Lake Conservation and Recreation Act, increasing the overall size of the park by 20%:

The exterior of the visitors center in 2008

The park includes a visitor's center, renovated in 2004, which features a museum and auditorium, providing exhibits on the areas cultural and natural history, as well as book and gift shops.[12]:13

Tri-State Peak is located in the park, and is accessible by trail. A marker designating the tripoint of the states of Kentucky, Tennessee, and Virginia, is located at the peak of the mountain.[17]

The park saw 737,547 visitors in 2017, according to statistics by the National Park Service.[1] According to one federal study, in 2013 visitor spending amounted to $46 million in nearby communities, supporting 639 local jobs.[18] Peak rates of visitation normally occur during the seasons of spring, summer and fall.[5]:xvii

In 2017 the park received the Keeper of the Light Award from the Southeast Region of the National Park Service, which recognizes excellence in education.[19] In 2016 the United States Mint released a commemorative quarter as part of the America the Beautiful series honoring the park.[20]

Retrieved from "https://en.wikipedia.org/w/index.php?title=Cumberland_Gap_National_Historical_Park&oldid=934355489"
Categories:
Hidden categories:
The article is a derivative under the Creative Commons Attribution-ShareAlike License. A link to the original article can be found here and attribution parties here. By using this site, you agree to the Terms of Use. Gpedia Ⓡ is a registered trademark of the Cyberajah Pty Ltd.