The Territory of Dakota was an organized incorporated territory of the United States that existed from March 2, 1861, until November 2, 1889, when the final extent of the reduced territory was split and admitted to the Union as the states of North and South Dakota.

The Dakota Territory consisted of the northernmost part of the land acquired in the Louisiana purchase in 1803, as well as the southernmost part of Rupert's Land, which was acquired in 1818 when the boundary was changed to the 49th parallel. The name refers to the Dakota branch of the Sioux tribes which occupied the area at the time. Most of Dakota Territory was formerly part of the Minnesota and Nebraska territories.[citation needed]

When Minnesota became a state in 1858, the leftover area between the Missouri River and Minnesota's western boundary fell unorganized. When the Yankton Treaty was signed later that year, ceding much of what had been Sioux Indian land to the U.S. Government, early settlers formed an unofficial provisional government and unsuccessfully lobbied for United States territory status.[citation needed]

A small patch of land known as "Lost Dakota" existed as a remote exclave of Dakota Territory until it became part of Gallatin County, Montana Territory, in 1873.[1]

Dakota Territory was not directly involved in the American Civil War but did raise some troops to defend the settlements following the Dakota War of 1862 which triggered hostilities with the Sioux tribes of Dakota Territory. The Department of the Northwest sent expeditions into Dakota Territory in 1863, 1864 and 1865. It also established forts in Dakota Territory to protect the frontier settlements of the Territory, Iowa and Minnesota and the traffic along the Missouri River. 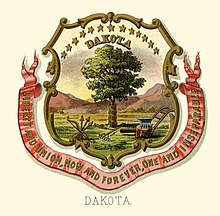 Historical coat of arms of the Dakota Territory (illustrated in 1876)

Following the Civil War, hostilities continued with the Sioux until the 1868 Treaty of Fort Laramie. By 1868, creation of new territories reduced Dakota Territory to the present boundaries of the Dakotas. Territorial counties were defined in 1872, including Bottineau County, Cass County and others.

The population increase can largely be attributed to the growth of the Northern Pacific Railroad. Settlers who came to the Dakota Territory were from other western territories as well as many from northern and western Europe. These included large numbers of Norwegians, Germans, Swedes, and Canadians.[4]

Commerce was originally organized around the fur trade. Furs were carried by steamboat along the rivers to the settlements. Gold was discovered in the Black Hills in 1874 and attracted more settlers, setting off the last Sioux War. The population surge increased the demand for meat spurring expanded cattle ranching on the territory's vast open ranges. With the advent of the railroad agriculture intensified: wheat became the territory's main cash crop. Economic hardship hit the territory in the 1880s due to lower wheat prices and a drought.[5] 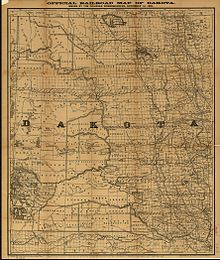 The territorial capital was Yankton from 1861 until 1883, when it was moved to Bismarck. The Dakota Territory was divided into the states of North Dakota and South Dakota on November 2, 1889. The admission of two states, as opposed to one, was done for a number of reasons. The two population centers in the territory were in the northeast and southeast corners of the territory, several hundred miles away from each other. On a national level, there was pressure from the Republican Party to admit two states to add to their political power in the Senate.[6]:100–101

Admission of new western states was a party political battleground with each party looking at how the proposed new states were likely to vote. At the beginning of 1888, the Democrats under president Grover Cleveland proposed that the four territories of Montana, New Mexico, Dakota and Washington should be admitted together. The first two were expected to vote Democratic and the latter two were expected to vote Republican so this was seen as a compromise acceptable to both parties. However, the Republicans won majorities in both the House and the Senate later that year. To head off the possibility that Congress might only admit Republican territories to statehood, the Democrats agreed to a less favorable deal in which Dakota was divided in two and New Mexico was left out altogether. Cleveland signed it into law on February 22, 1889, and the territories could become states in nine months time after that. However, incoming Republican president Benjamin Harrison had a problem with South Dakota; most of the territory was Sioux reservation land and the state would not be viable unless much of this land became available to settlers.[6]:100–102

There had been previous attempts to open up the territory, but these had foundered because the Treaty of Fort Laramie (1868) required that 75% of Sioux adult males on the reservation had to agree to any treaty change. Most recently, a commission headed by Richard Henry Pratt in 1888 had completely failed to get the necessary signatures in the face of opposition from Sioux leaders and even government worker Elaine Goodale, later Superintendent of Indian Education for the Dakotas. The government believed that the Dawes Act (1887), which attempted to move the Indians from hunting to farming, in theory, meant that they needed less land (but in reality was an economic disaster for them) and that at least half was available for sale. Congress approved an offer of $1.25 per acre for reservation land (a figure they had previously rejected as outrageously high) and $25,000 to induce the Indians to sign.[6]:pp. 97–99, 102

A new commission was appointed in April 1889 that included veteran Indian fighter general George Crook. Crook pulled out all the stops to get the Indians to sign, using a number of underhand tactics. He threatened them that if they did not sign, the land would be taken anyway and they would get nothing. This would not have been seen as an idle threat; the treaty had been ignored in the past when the Black Hills were taken from the Sioux. Crook ignored leaders like Sitting Bull and Red Cloud who opposed the sale and kept them out of the negotiations, preferring instead to deal with moderate leaders like American Horse. American Horse, however, claimed immediately afterwards that he had been tricked into signing. Crook made many personal promises (such as on reservation rations) which he had no authority to make, or ability to keep. He claimed afterwards that he had only agreed to report the concerns back to Washington. Crook lied about how many signatures he already had, giving the impression that the signature he was currently asking for would make no difference. He said that those who did not sign would not get a share of the money for the land. Crook even allowed white men who had married Sioux to sign, a dubious action given that the blood quantum laws only counted full-blood Indians as members of the tribe. By August 6, 1889, Crook had the requisite number of signatures, half the reservation land was sold, and the remainder divided among six smaller reservations.[6]:pp. 102–105

North Dakota and South Dakota became states simultaneously on November 2, 1889. President Harrison had the papers shuffled to obscure which one was signed first and the order went unrecorded.[7]

Dakota Territory was the setting for the syndicated western television series, Man Without a Gun, starring Rex Reason as newspaper editor Adam McLean and Mort Mills as Marshal Frank Tillman. The program aired from 1957 to 1959.

The Disney musical film The One and Only, Genuine, Original Family Band takes place in the Dakota Territory during the time of the 1888 Presidential Election.

Dakota Territory was the setting for several novels. Five books in Laura Ingalls Wilder's Little House on the Prairie series, namely By the Shores of Silver Lake, The Long Winter, Little Town on the Prairie, These Happy Golden Years and The First Four Years, were set in Dakota Territory. Ole Rølvaag's Giants in the Earth, a novel about Norwegian pioneers, was set in southeastern Dakota Territory. The story was later adapted as an opera by the same name, which won a Pulitzer Prize for Music in 1951.

Dakota Territory is the main setting for the HBO TV series Deadwood. The city of Yankton and the Black Hills area are mentioned often in the show.

Retrieved from "https://en.wikipedia.org/w/index.php?title=Dakota_Territory&oldid=932020720"
Categories:
Hidden categories:
The article is a derivative under the Creative Commons Attribution-ShareAlike License. A link to the original article can be found here and attribution parties here. By using this site, you agree to the Terms of Use. Gpedia Ⓡ is a registered trademark of the Cyberajah Pty Ltd.