Jump to navigation Jump to search
desert in northeast Ethiopia

The Danakil Desert is a desert in northeast Ethiopia, southern Eritrea, and northwestern Djibouti. Situated in the Afar Triangle, it stretches across 136,956 square kilometres (52,879 sq mi)[citation needed] of arid terrain. The area is known for its volcanoes and extreme heat, with daytime temperatures surpassing 50 °C (122 °F).[1] Less than an inch of rainfall occurs each year.[2] The Danakil Desert is one of the lowest and hottest places on Earth. It is inhabited by a few Afar, who engage in salt mining. 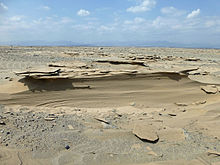 Local geology is characterized by volcanic and tectonic activity, various climate cycles, and discontinuous erosion. The basic geological structure of this area was caused by the movement of tectonic plates as Africa moved away from Asia. Mountain chains formed and were eroded again during the Paleozoic. Inundations by the sea caused the formation of layers of sandstone, and limestone was deposited further offshore. As the land rose again, further sandstone formed above the limestone. Further tectonic shifts caused lava to pour out of cracks and cover the sedimentary deposits.[2]

The Danakil Desert has a number of lakes formed by lava flows that dammed up several valleys. Among these is Lake Afrera, which has thick saline crusts on its banks. Other areas of the Danikil became sinks, dry endorheic basins as precipitation evaporates faster than it can collect in permanent lakes. The area is flanked toward the east by the Danakil Alps, a tabular mountain system that has a few volcanic cones which peak in height in Mount Ramlo (2,130 metres (7,000 ft)).

A deposit of salt up to 800 metres (2,600 ft) thick can also be found in the Salt Plain flatlands. Other local lakes include Lake Asale (116 metres (381 ft) below sea level) and Lake Giuletti/Afrera (80 metres (260 ft) below sea level), both of which possess cryptodepressions in the Danakil Depression. The Afrera contains many active volcanoes, including the Maraho, Dabbahu, Afdera and Erta Ale.[2][3]

The Afar people mine salt, loading each of their camels with up to thirty salt bricks weighing four kilograms each. It will then take two days to get to the nearest town, with guards watching the camels and guarding them from bandits.[4]

Retrieved from "https://en.wikipedia.org/w/index.php?title=Danakil_Desert&oldid=945066820"
Categories:
Hidden categories:
The article is a derivative under the Creative Commons Attribution-ShareAlike License. A link to the original article can be found here and attribution parties here. By using this site, you agree to the Terms of Use. Gpedia Ⓡ is a registered trademark of the Cyberajah Pty Ltd.