Darlington Joephillip Nagbe (born July 19, 1990) is an American soccer player who plays for Columbus Crew SC in Major League Soccer and the United States men's national soccer team as a midfielder. Nagbe spent the first seven seasons of his career with the Portland Timbers, winning the MLS Cup with the club in 2015, before being acquired by Atlanta United following the 2017 season.

Nagbe was born in Liberia and left the country as a five-month-old when his mother fled the country due to the First Liberian Civil War, taking him and his brother with her.[2] They then joined her husband Joe Nagbe, a professional soccer player, and his career took the family to France, Greece and Switzerland before they eventually settled in the Cleveland area in 2001 when Darlington was 11 years old.[3]

Nagbe grew up in Lakewood, Ohio, where he attended Lakewood High School and then St. Edward High School, scoring 18 goals and adding 10 assists as a senior. He was a member of the Region II ODP team, was a 2007 adidas ESP All-Star and was member of the Ohio North ODP team, as well as winning four Ohio North state club titles with the Cleveland Internationals. Nagbe also participated in the U.S. Soccer Development Academy with the Internationals.

Nagbe played college soccer at the University of Akron, scoring 19 goals and contributing 19 assists in 73 matches during three collegiate seasons. He was a Soccer America All-Freshman first team honoree, and was named the All-MAC Newcomer of the Year in as a freshman in 2008. As a sophomore in 2009 Nagbe was named to the NSCAA All-America Second Team, the Soccer America MVP Second Team, the Top Drawer Soccer Team of the Season Second Team, the All-Great Lakes Region First Team and the All-Mid-American Conference First Team. In 2010 Nagbe helped the Akron Zips to their first ever national championship, a 1–0 regulation win in the College Cup Final against Louisville; he was subsequently named to the NSCAA All-America First Team, the All-MAC First Team, the College Cup All-Tournament Team, and was honored with the MAC Hermann Trophy as the 2010 College Soccer Player of the Year.[4]

Nagbe was selected by Portland Timbers in the first round (second overall) of the 2011 MLS SuperDraft.[9][10] After missing the first couple of weeks of the season due to injury, Nagbe made his professional debut on April 2, 2011 in a 1–1 draw with New England Revolution.[11] Nagbe scored his first goal with a volley, which was eventually named the 2011 MLS goal of the year, in a 2–1 loss to Sporting Kansas City on July 2, 2011.[12][13]

On January 8, 2013, Nagbe was reunited with his coach at Akron, Caleb Porter, after Porter was officially hired by Portland.[14] Nagbe finished the 2013 season with 9 goals, the highest total in his time with Portland. He also scored once in the postseason, the first postseason appearance in Portland's history, in the first leg of the knockout round against rivals Seattle Sounders. After the season, Nagbe was awarded with the individual Fair Play Award, after committing only eight fouls and receiving one yellow card in 2,848 minutes of regular season play.[15] Nagbe was a part of Portland's MLS Cup winning campaign in 2015, starting all but one game in the season. He received the Fair Play Award for the second time in his career, committing only 11 fouls, and not receiving any bookings, which he also accomplished in 2014.[16]

Nagbe was injured after a hard tackle on April 11, 2016, during a MLS soccer game between the LA Galaxy and the Portland Timbers. Nigel de Jong, LA Galaxy midfielder and Netherlands international player rolled over the ball straight toward Nagbe's ankle. Nagbe was stretchered off the field by medics and left the stadium in a wheelchair. However, the injury turned out to be a sprained ankle and he missed just two matches before returning to action. De Jong, who received a yellow card for the tackle during the match, was later suspended for three matches.[17][18][19]

In July 2016, he was included in the roster for the 2016 MLS All-Star Game, making the squad for the first time in his career.[20] After the season, Nagbe was close to making a £3 million move to Scottish side Celtic, but the deal fell through, and Nagbe remained with Portland for the 2017 season.[21][22] 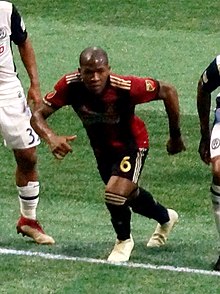 On December 13, 2017, Atlanta United finalized a trade to acquire Nagbe in exchange for $1.05 million in allocation money, with another $600,000 in incentive-based allocation money going the other way.[23] He joined a prolific Atlanta attack which scored the second-most goals in 2017 under manager Gerardo Martino. Darlington Nagbe had a guaranteed compensation of $620,000 for the 2018 MLS Season [24]

On November 6, 2015, Nagbe was named to the U.S. National Team roster[26] for a pair of 2018 FIFA World Cup qualifying matches against St. Vincent and the Grenadines and Trinidad and Tobago. Nagbe made his international debut on November 13, 2015, coming on as a 64th-minute substitute.[27]

Nagbe scored his first goal for the U.S. National Team on May 25, 2016 in the 90th minute to secure a 1–0 victory in a friendly match against Ecuador.[28] He was added to the squad for the knockout stage of the 2017 CONCACAF Gold Cup, which the United States won. Nagbe started all three games in the knockout stage and was named to the tournament's Best XI.[29] He also took part in the United States' unsuccessful World Cup qualifying campaign, starting 7 of 10 matches in the Hexagonal as the United States did not qualify for the tournament for the first time since 1986.

Nagbe is the son of Somah Nagbe and Joe Nagbe, the former captain of the Liberian national team. He has two younger sisters, Martha and Seta, and one older brother, Joe Jr. In 2012, he married Felicia Houtz and the couple have a daughter named Mila and a son named Kingston.[30]

Retrieved from "https://en.wikipedia.org/w/index.php?title=Darlington_Nagbe&oldid=968948275"
Categories:
Hidden categories:
The article is a derivative under the Creative Commons Attribution-ShareAlike License. A link to the original article can be found here and attribution parties here. By using this site, you agree to the Terms of Use. Gpedia Ⓡ is a registered trademark of the Cyberajah Pty Ltd.