Declaration of war by the United States

Jump to navigation Jump to search
aspect of U.S. law, government, and military 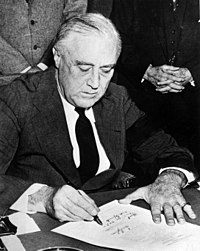 A declaration of war is a formal declaration issued by a national government indicating that a state of war exists between that nation and another. The document Declarations of War and Authorizations for the Use of Military Force: Historical Background and Legal Implications gives an extensive listing and summary of statutes which are automatically engaged upon the US declaring war.

For the United States, Article One, Section Eight of the Constitution says "Congress shall have power to ... declare War." However, that passage provides no specific format for what form legislation must have in order to be considered a "declaration of war" nor does the Constitution itself use this term. In the courts, the United States Court of Appeals for the First Circuit, in Doe v. Bush, said: "[T]he text of the October Resolution itself spells out justifications for a war and frames itself as an 'authorization' of such a war."[1] in effect saying an authorization suffices for declaration and what some may view as a formal Congressional "Declaration of War" was not required by the Constitution.

The last time the United States formally declared war, using specific terminology, on any nation was in 1942, when war was declared against Axis-allied Hungary, Bulgaria, and Romania, because President Franklin Roosevelt thought it was improper to engage in hostilities against a country without a formal declaration of war. Since then, every American president has used military force without a declaration of war.[2]

In World War II, the Japanese attacked Pearl Harbor on December 7, 1941. Germany and Italy, led respectively by Adolf Hitler and Benito Mussolini, declared war on the United States, and the U.S. Congress responded in kind.[8][9]

In other instances, the United States has engaged in extended military combat that was authorized by Congress.

In many instances, the United States has engaged in extended military engagements that were authorized by United Nations Security Council Resolutions and funded by appropriations from Congress.[23]

On at least 125 occasions, the President has acted without prior express military authorization from Congress.[26] These include instances in which the United States fought in the Philippine–American War from 1898–1903, in Nicaragua in 1927, as well as the NATO bombing campaign of Yugoslavia in 1999, and the 2017 missile strikes on Syria.

The United States' longest war was fought between 2001 and 2016 against the Taliban in Afghanistan.

The Indian Wars comprise at least 28 conflicts and engagements. These localized conflicts, with Native Americans, began with European colonists coming to North America, long before the establishment of the United States. For the purpose of this discussion, the Indian Wars are defined as conflicts with the United States of America. They begin as one front in the American Revolutionary War in 1775 and had concluded by 1918. The United States Army still maintains a campaign streamer for Pine Ridge 1890–1891 despite opposition from certain Native American groups.[27]

The American Civil War was not an international conflict under the laws of war, because the Confederate States of America (CSA) was not a government that had been granted full diplomatic recognition as a sovereign nation by other sovereign states[28][29] or by the government of the United States.[30]

In 1973, following the withdrawal of most American troops from the Vietnam War, a debate emerged about the extent of presidential power in deploying troops without a declaration of war. A compromise in the debate was reached with the War Powers Resolution. This act clearly defined how many soldiers could be deployed by the President of the United States and for how long. It also required formal reports by the President to Congress regarding the status of such deployments, and limited the total amount of time that American forces could be deployed without a formal declaration of war.

Although the constitutionality of the act has never been tested, it is usually followed, most notably during the Grenada Conflict, the Panamanian Conflict, the Somalia Conflict, the Persian Gulf War, and the Iraq War[clarification needed]. The only exception was President Clinton's use of U.S. troops in the 78-day NATO air campaign against Yugoslavia during the Kosovo War.[citation needed] In all other cases, the President asserted the constitutional authority to commit troops without the necessity of Congressional approval, but in each case the President received Congressional authorization that satisfied the provisions of the War Powers Act.

On March 21, 2011, a number of lawmakers expressed concern that the decision of President Barack Obama to order the U.S. military to join in attacks of Libyan air defenses and government forces exceeded his constitutional authority because the decision to authorize the attack was made without Congressional permission.[31] Obama explained his rationale in a two-page letter, stating that as commander in chief, he had constitutional authority to authorize the strikes, which would be limited in scope and duration, and necessary to prevent a humanitarian disaster in Libya.

Retrieved from "https://en.wikipedia.org/w/index.php?title=Declaration_of_war_by_the_United_States&oldid=939183367"
Categories:
Hidden categories:
The article is a derivative under the Creative Commons Attribution-ShareAlike License. A link to the original article can be found here and attribution parties here. By using this site, you agree to the Terms of Use. Gpedia Ⓡ is a registered trademark of the Cyberajah Pty Ltd.