The Delta Flight Museum is an aviation and corporate museum located in Atlanta, Georgia, United States, near the airline's main hub, Hartsfield–Jackson Atlanta International Airport. The museum is housed in two 1940s-era Delta Air Lines aircraft hangars at Delta's headquarters, designated a Historic Aerospace Site in 2011.[1] Its mission is to allow visitors from around the world "to explore aviation history, celebrate the story and people of Delta, and discover the future of flight."[2] Over 40 airlines in Delta's family tree can be found in the museum's collections and exhibitions.[3] The museum is a nonprofit organization and relies on volunteers, corporate sponsors, donations, event rentals and merchandise sales. The Delta Flight Museum is considered an ongoing project and items are added to the collections year round.

The museum opened to the general public in June 2014.[4] Prior to that, Delta employee ID or prior arrangement was required to access the campus in which the museum is located.

The idea for a museum about Delta Air Lines originated with group of retirees who started a campaign in 1990 to find one of Delta's original five purchased-new Douglas DC-3's from the early 1940s. After some searching, the employees struck gold when they found Delta Ship 41, Delta's second DC-3 to carry passengers, in Puerto Rico performing cargo services. The group bought the plane from the cargo airline and flew Ship 41 home to Atlanta. The aircraft restoration project combined with efforts to consolidate historic collections from around the Delta headquarters led to the formation of a non-profit museum, named the Delta Air Transport Heritage Museum, Inc.

From 1995 to October 8, 1999, Ship 41 was painstakingly restored by active and retired Delta employees and volunteers to its exact original configuration and appearance when it was first delivered to Delta on January 4, 1941. Delta Ship 41 is by far one of the most faithfully restored passenger transport DC-3s in the world, evidenced by the fact that in 2001, it was the first aircraft to be presented with an award from the National Trust for Historic Preservation. Delta Ship 41 is the only remaining Delta passenger Douglas DC-3 left in existence. Delta Air Lines is the only major air carrier known to still possess its first new passenger carrying DC-3.[5]

On May 23, 1995, the Delta Air Transport Heritage Museum was incorporated under Georgia law as an independent nonprofit corporation, organized exclusively for public charitable uses and purposes and qualified under Section 501(c)(3) of the Internal Revenue Code.[6] 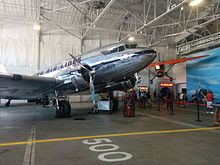 Delta Ship 41 in Historic Hangar 1, with the Stinson Reliant in the background.

In the Propeller Era (Hangar One) is the Monroe Cafe, a full-scale replica of Delta's former Monroe, Louisiana headquarters. It served as Delta's headquarters from 1928 to 1941, when headquarters were moved to Atlanta.[7][8] Hangar One also houses several of the museum's restored aircraft, which include:

The Spirit of Delta in restoration hangar.

The Jet Era (Hangar Two) showcases Boeing 767 Delta Ship 102 (N102DA), The Spirit of Delta. Acquired in 1982, it was the company's first Boeing 767-200. It was paid for "by voluntary contributions from employees, retirees and Delta's community partners." The effort, called Project 767, was spearheaded by three Delta flight attendants to show the employees' appreciation to Delta for "solid management and strong leadership during the first years following airline deregulation."[citation needed] The aircraft was repainted in a commemorative paint scheme and toured the country to celebrate the airline's 75th anniversary in 2004.[13] The airplane remained the flagship of the Delta fleet until March 2006 (it was later replaced with a Boeing 777-200LR named The Delta Spirit). The aircraft arrived at the museum on March 3, 2006 after a farewell tour around the United States. Additional exhibit items in Hangar 2 include the forward fuselage of the prototype Lockheed L-1011 (formerly home to the museum store), the cockpit section of a Convair 880, the tail section of a Douglas DC-9, and a Boeing 737 flight simulator that formerly trained Delta pilots and now available for a one-hour flight experience.[14][15] 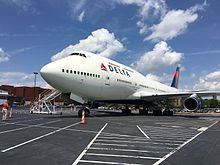 The most significant aircraft in the outdoor collection is Delta Ship 6301 (N661US), the first production Boeing 747-400. Originally used for flight testing by Boeing as N401PW, N661US was delivered to Northwest Airlines on January 26, 1989.[19]

On October 9, 2002, N661US was operating as Northwest Flight 85 when it had to make an emergency landing in Anchorage while on its way to Tokyo from Detroit due to a rudder malfunction.

When Northwest merged with Delta in 2009, N661US became Delta Ship 6301 and continued passenger operations for Delta until it was retired on September 9, 2015,[20] having logged more than 61 million miles of flight over its lifetime.[21] Ship 6301's significance, both as an individual aircraft and to Delta meant that it was quickly acquired by the museum after it was retired.

N661US when it was in service with Northwest Airlines at the time of its incident in 2002.

The following April, the jumbo jet was moved across two streets from a parking spot on the tarmac at Atlanta Hartsfield-Jackson International Airport to its permanent home in the museum parking lot.[20][22]

Delta employees conducted a funding campaign called "The Airloom Project" with the aim of converting Ship 6301 and the parking lot surrounding it into an outdoor exhibit similar to The Spirit of Delta inside.[23] Much like in the Spirit of Delta, museum visitors enter the 747-400 via stairs and an elevator, proceed through the intact first class cabin, then through the economy section, part of which has been converted into an exhibition space, where the aft pressure bulkhead is visible. Visitors are also able to walk on a walkway that runs over part of the wing, protected by railings. In addition, the cargo hold has been emptied and the cabin ceiling removed so that visitors can look down from the upper deck through the lower deck and cargo hold to see the entirety of the aircraft's massive cross-section.[24]

N675MC, the museum's DC-9, and the oldest aircraft in the airline's fleet at the time of its retirement.

The Museum's collections and facilities include:

Retrieved from "https://en.wikipedia.org/w/index.php?title=Delta_Flight_Museum&oldid=965469141"
Categories:
Hidden categories:
The article is a derivative under the Creative Commons Attribution-ShareAlike License. A link to the original article can be found here and attribution parties here. By using this site, you agree to the Terms of Use. Gpedia Ⓡ is a registered trademark of the Cyberajah Pty Ltd.