Although Haiti averages approximately 402 people per square kilometer (1041 per sq. mi.), its population is concentrated most heavily in urban areas, coastal plains, and valleys. The majority of Haitians, 95%, are of predominantly African descent. But in 2020, with all the emigration and with all the UN services that have gone in this country, DNA tests on several people revealed that they are 80% predominantly African descent with 86% black African, 12% European, and 2% Native American depending on the department of the country. The remaining population is primarily Mulattoes, Europeans, Asians, and Arabs. Hispanic residents in Haiti are mostly Cuban and Dominican. About two-thirds of the Haitian people live in rural areas.

Although there was a national census taken in Haiti in 2003, much of that data has not been released. Several demographic studies, including those by social work researcher Athena Kolbe, have shed light on urban residents' current status. In 2006, households averaged 4.5 members. The median age was 25 years, with a mean average age of 27 years. People aged 15 and younger counted for roughly a third of the population. Overall, 52.7 percent of the population was female.

Structure of the population [5]

Registration of vital events in Haiti is not complete. The Population Department of the United Nations prepared the following estimates. [3]

While limited, evidence suggests that disasters can cause human populations to increase in the long term, rather than decrease. Documented fertility spikes followed the Khmer Rouge conflict and 2004 Indian Ocean tsunami - potential causes may include reduced access to contraception and families desiring more children following child death.[6] In Haiti's case, the fertility rate nearly tripled after the quake, and is likely to remain elevated (above pre-quake levels) for long after.[7]

Number of births and deaths are calculated - based on Crude Birth and Death Rates.

Demographic statistics according to the World Population Review in 2019.[10]

Demographic statistics according to the CIA World Factbook, unless otherwise indicated.[11] 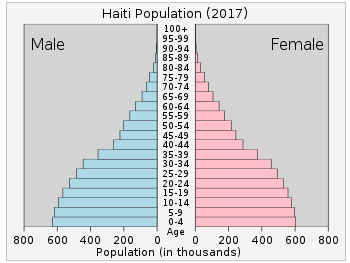 Population pyramid of Haiti in 2017

Taíno was the major pre-Columbian language in the region of what is Haiti (or Ayti), a name rooted in the language to refer to the entire island of Hispaniola[12][13] to mean, "land of high mountains."[14]

Today, the Republic of Haiti has two official languages. They are French and Haitian Creole; the latter, a French-based creole where 90% of its vocabulary is derived from, with influences from Portuguese, Spanish, Taíno, and West African languages.[15] French is the principal written and administratively authorized language (as well as the main language of the press) and is spoken by 42% of Haitians.[16][17] It is spoken by most educated Haitians, is the medium of instruction in most schools, and is used in the business sector. It is also used in ceremonial events such as weddings, graduations and church masses.

Haiti is one of two independent nations in the Americas (along with Canada) to designate French as an official language; the other French-speaking areas are all overseas départements, or collectivités, of France. Haitian Creole,[18] which has recently undergone a standardization, is spoken by virtually the entire population of Haiti.[19] It is related to the other French creoles, but most closely to Antillean Creole and Louisiana Creole variants.

Spanish, though not official, is spoken by a growing amount of the population, and is spoken more frequently near the border with the Dominican Republic. English is increasingly spoken among the young and in the business sector.[20]

The state religion is Roman Catholicism which 55–60% of the population professes. 30–35% of Haitians practice Protestantism(mostly Pentecostalism). An important percentage of the population practice Vodou, mostly along with another religion.[11] The main religions practiced in Haiti are Roman Catholicism, Pentecostalism, Islam, and Judaism. In addition, the protestant population is continuing to grow, along with Islam and Judaism. Almost 99% of Haitians claim at least one religion, with a part of them practicing some part of Vodou. [21]

Vodou is rare among the urban elite and is often compared to Cuban Santeria due to the large Cuban population in Haiti. [22] The practice of Vodou revolves around family spirits called Lwa that protect children. To repay the spirits, children perform two ceremonies where the Lwa are given gifts like food and drinks. That does depend of the monetary status of these families, poorer families wait until there is a need to perform the rituals. [23]

Vodou in relation to Christianity came along two different paths, the path with the Catholics and the path with the protestants. For the Catholic path; under the French the slaves were not allowed to practice Vodou, but they were allowed to occasionally have dances on the weekend. These dances turned out to be Vodou services, until they were liberated in 1804. Most Haitians see practicing Vodou and Christianity as normal due to the many components they share. The catholic church wasn't always as accepting of Vodou as it is now. In 1941-1942 a holy war was waged against Vodou killing many of the higher ups in the Vodou religion. This war ended around 1950 when the Catholics decided give up the prosecution of those who practiced Vodou and to have a relative peace. The path with the protestants was less peaceful. The Protestants came to Haiti in 1970 and since then they have been bitter enemies of Vodou, most often calling it devil worship. [24]

A fictionalized version of Vodou commonly called "voodoo" has been used in American movies and by authors such as H.P. Lovecraft. Vodou and voodoo are not interchangeable, although the word lives on in American pop culture.[25]

Although public education at the primary level is now free, private and parochial schools provide around 75% of educational programs offered.

In recent years, several annual literacy campaigns launched in by the Martelly administration has increased overall literacy among adults in Haiti.[26] UNESCO projects an overall literacy rate of 61.1% in Haiti by 2015.[27] As of December 2014, World Bank has reported that school enrollment has increased from 78% to 90% in Haiti, very close to the goal of universal child enrollment.[28]

In 2004, 300,000 children were restavecs, the practice of which is comparable to indentured service of minors.[29]

Large-scale emigration, principally to the Dominican Republic, United States, and Canada (predominantly to Quebec, with other areas of the country) – but also to Cuba, other areas of Europe and the Americas (like Argentina) such as France (with French Guiana), Spain, Belgium, the United Kingdom and Ireland; and Venezuela, Brazil, Chile, the Bahamas and other Caribbean neighbors – has created what Haitians refer to as the Eleventh Department or the Diaspora. About one of every six Haitians live abroad.

45,000 Westerners from the United States live in Haiti. They represent 0.4% of its total population.[30]

Retrieved from "https://en.wikipedia.org/w/index.php?title=Demographics_of_Haiti&oldid=978159890"
Categories:
Hidden categories:
The article is a derivative under the Creative Commons Attribution-ShareAlike License. A link to the original article can be found here and attribution parties here. By using this site, you agree to the Terms of Use. Gpedia Ⓡ is a registered trademark of the Cyberajah Pty Ltd.