The 2008 presidential campaign of Dennis Kucinich, House Representative of Ohio and former mayor of Cleveland, began on December 12, 2006 when he announced that he would seek the nomination for the Democratic Party to run for President of the United States. Although a Democratic candidate, he was not included in the New Hampshire debates on January 4, 2008 or the South Carolina debates on January 21, 2008 because of his poor showings in the Iowa caucuses and the polls.

On Thursday, January 24, 2008, Kucinich dropped his bid for the Democratic nomination after failing to draw more than 10% of the vote in a single contest. In withdrawing from the race, he cited his exclusion from Presidential debates and his desire to continue his service in Congress.[1] 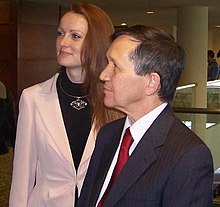 Kucinich with his wife in January 2008.

On December 11, 2006 in a speech delivered at Cleveland City Hall, Kucinich announced he would seek the nomination of the Democratic Party for President in 2008. His platform[2] for 2008 included:

Kucinich describes his stance on the issues as mainstream.[3] "My politics are center for the Democratic party," he said in an interview before an AFL-CIO sponsored debate.[4]

Kucinich ranked close to last place (ranging from 8 to 12th) in early polls but got stronger by June and July climbed to 4th and 5th in several polls. In the Rasmussen Reports poll of August 14, 2007, he was tied for 5th place, behind Senator Hillary Rodham Clinton, Senator Barack Obama, former Senator John Edwards, New Mexico Governor Bill Richardson, and tied with Senator Joe Biden. Data from Rasmussen Reports A Rasmussen poll of Democratic candidates, released on September 5, 2007 showed Kucinich in a tie for fourth place with Governor Richardson with 4% of Democratic voters saying they support him.[5] The latest Fox News poll that did not include former Vice President Al Gore placed Kucinich with 4% of registered Democratic voters, behind Hillary Clinton, Barack Obama, and John Edwards. Including Gore, Kucinich is tied with Governor Richardson.[citation needed]

In the early primary state of New Hampshire, Kucinich polled as high as tied for 4th place at 7%.[6]

Exclusions from debates and primaries

Kucinich was excluded from the January 15, 2008 debate in Las Vegas, Nevada. Kucinich sued for the right to participate in the debate, but the Nevada Supreme Court ruled in favor of MSNBC.[11]

Kucinich was excluded from Texas Democratic Primary because he refused to sign a so-called "loyalty oath," which required the signers to "fully support the Democratic nominee for president, whoever that shall be." Kucinich lost his federal suit to be included on the ballot. Kucinich is appealing the decision to the United States Supreme Court.[12]

Endorsements of other candidates

Kucinich named Ron Paul as his choice running mate in November 2007.[14] In a January 1, 2008, press release Kucinich asked his Iowa supporters to make Barack Obama their second choice as he endorsed Obama.[15]

On August 26, 2008, at the 2008 Democratic National Convention, Kucinich gave a spirited speech structured around the refrain "Wake up America!" The speech levies trenchant criticism of the perceived abuses of power of the George W. Bush administration, attacks the corporate control of the American political and economic systems, and rallies for a program of universal health coverage, universal higher education, tax reform, trade policy reform, energy regulation, civil liberties and de-militarization. At the end of the speech, Kucinich reiterates his endorsement for Barack Obama and Joe Biden for president and vice-president. His words electrified the audience who began delivering a standing ovation midway through the speech and continued cheering past its closure.[16]

Retrieved from "https://en.wikipedia.org/w/index.php?title=Dennis_Kucinich_2008_presidential_campaign&oldid=946226047"
Categories:
Hidden categories:
The article is a derivative under the Creative Commons Attribution-ShareAlike License. A link to the original article can be found here and attribution parties here. By using this site, you agree to the Terms of Use. Gpedia Ⓡ is a registered trademark of the Cyberajah Pty Ltd.