The Deployable Operations Group (DOG) was a United States Coast Guard command that provided properly equipped, trained and organized Deployable Specialized Forces (DSF), which still exist today, to the Coast Guard, DHS, DoD and inter-agency operational and tactical commanders.[clarification needed] Formerly headquartered in Arlington, Virginia, it was established on 20 July 2007, and was commanded by a captain and was decommissioned by the Commandant of the Coast Guard, Admiral Robert Papp on 1 October 2013, although many of the units existed long before the 2007 commissioning. Upon decommissioning, the units previously assigned to the DOG were split between Coast Guard Pacific and Atlantic Area commands.

From 2007 to 2013, the DOG deployed throughout the world in support of national interests and requirements as tailored and integrated force packages. This included response to the 2010 Haiti earthquake, in support of the Deepwater Horizon oil spill in the Gulf of Mexico, and more recently deploying specialized counter piracy boarding teams to the Middle East to combat piracy operations.

The DOG's purpose was to develop systems and processes for standardized training, equipment, organization, planning, and scheduling of rapidly deployable specialized forces to execute mission objectives in support of tactical and operational commanders.[1]

The DOG was the Coast Guard's special forces element, but it was not part of United States Special Operations Command (USSOCOM) because the Coast Guard does not operate under the Department of Defense. Missions of DOG or current DSF units include high-risk, high-profile tasks such as counter-terrorism, diving operations, intelligence-cued boarding operations, Visit, Board, Search, and Seizure and threat assessments involving nuclear, biological, or chemical weapons.

The DOG also had health services technicians and paramedics who were attached to medical teams operating within differing commands. These technicians supported roles in Afghanistan, Iraq, and other areas with Navy and Department of Defense groups.

The DOG managed Coast Guard personnel assigned to the Navy Expeditionary Combat Command (NECC).[2] It was also involved in the selection of Coast Guard candidates to attend United States Naval Special Warfare training and serve with Navy SEAL teams.[3] While the program is currently suspended there are still several Coast Guardsmen serving on SEAL teams.

The Port Security program of the Coast Guard can be traced back all the way back to 1917 with the passage of the Espionage Act and due to the Black Tom explosion.[4] Port Security Units are deployable expeditionary force protection. Unlike any other Coast Guard Units, Port Security Units are the only deployable unit, with the ability to deploy within 96 hours of a crisis and establish operations within 24 hours of arrival[5] or abroad in support of various Department of Defense operations.

Port Security units are trained and equipped to provide: 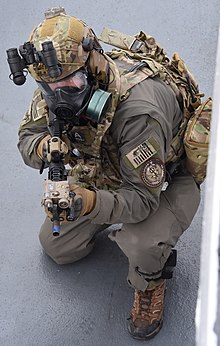 A member of Coast Guard Maritime Security Response Team West trains for a simulated terrorist threat aboard the motor vessel Aurora while in transit from Cordova to Whittier, Alaska, April 10, 2019.

Maritime Security Response Team (MSRT) has existed in different incarnations, but was formally established in 2006.[9] It is the only unit within the Coast Guard that has counter-terrorism capabilities to conduct action against hostile targets. The MSRT is trained to be the first response unit to potential terrorist threats, deny preemptive terrorist actions, execute security actions against armed hostiles and/or non-compliant threats, participate in port level counter-terrorism exercises, execute tactical facility entry, and educate other forces on Coast Guard's counter-terrorism procedures. Although the MSRT's focus is primarily on the safety and security of homeland defense, it is capable of rapidly deploying worldwide in response to incidents.[10] Other specialized units and federal agencies that MSRTs routinely train with are the Special Warfare Combatant-craft Crewman (SWCC), Helicopter Sea Combat Squadrons, SEAL teams and Explosive Ordance Disposal (EOD) of the Navy, Maritime Raid Force of the Marine Corps, Special Mission Units, the Secret Service, Federal Bureau of Investigation (FBI), the Border Patrol's BORTAC, and the Customs and Border Protection Special Response Teams (SRT). Their motto, as seen on their unit patch, is "Nox Noctis est Nostri", which translates from Latin to English is "The Night is Ours".

MSRT members are selected through experienced maritime law enforcement members, often selected from MSST and TACLET teams. Many of these members are already highly trained and qualified when selected. Elements of the MSRT's primary assault force are known as a Direct Action Section (DAS). Members of a DAS may include a Team Leader, Comms/JTAC's, Breachers, Medics, Precision Marksmen, Observation members (snipers/observers), and team members trained to identify Chemical, Biological, Nuclear, Radiological (CBRN) threats. These assault force teams train extensively in advanced close quarters combat and advanced combat marksmanship. They are well-trained to quickly and surreptitiously board suspicious vessels, secure gas and oil platforms or secure land-based targets by fast-roping from helicopters or using other undisclosed methods to neutralize enemy personnel. The Tactical Delivery Team (TDT) and the boat assault force are trained in advanced vessel delivery tactics and stealthy delivery of the main assault force (DAS) as well as follow on forces.

The National Strike Force (NSF) was established in 1973 as a direct result of the Federal Water Pollution Control Act of 1972.[11] The NSF provides highly trained, experienced personnel and specialized equipment to Coast Guard and other federal agencies to facilitate preparedness for and response to oil discharges, hazardous materials releases, and weapons of mass destruction (WMD) incidents.

The National Strike Force (NSF) includes five units with over 200 active duty, civilian, reserve, and auxiliary personnel. It is commanded by a captain. 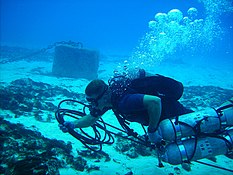 Naval Coastal Warfare (NCW) These Coast Guard units are part of an interoperable force and are part of the Department of Defense international and domestic security. They provide anti-terrorism / force protection for forward deployed base camps and ports around the world where needed. Coast Guard billets assigned to NCW Groups support NECC expeditionary ops.

The Deployable Operations group fell into three levels of physical fitness. This test was very similiar to the FBI test or applying to a local or state police agencies SWAT team.[15]

The Tier One Fitness test is:

The Tier Two fitness is:

Retrieved from "https://en.wikipedia.org/w/index.php?title=Deployable_Operations_Group&oldid=961391625"
Categories:
Hidden categories:
The article is a derivative under the Creative Commons Attribution-ShareAlike License. A link to the original article can be found here and attribution parties here. By using this site, you agree to the Terms of Use. Gpedia Ⓡ is a registered trademark of the Cyberajah Pty Ltd.