Dinosaur National Monument is an American national monument located on the southeast flank of the Uinta Mountains on the border between Colorado and Utah at the confluence of the Green and Yampa rivers. Although most of the monument area is in Moffat County, Colorado, the Dinosaur Quarry is located in Utah, north of the town of Jensen, Utah at 40°26′29″N 109°18′04″W﻿ / ﻿40.44139°N 109.30111°W﻿ / 40.44139; -109.30111. The nearest Colorado town is Dinosaur while the nearest city is Vernal, Utah.

The park contains over 800 paleontological sites and has fossils of dinosaurs including Allosaurus, Deinonychus, Abydosaurus, and various sauropods. The Abydosaurus consists of a nearly complete skull, the lower jaw, and first four neck vertebrae. The specimen was found at the base of the Mussentuchit Member of the Cedar Mountain Formation and is the holotype for the description.

Multicolored beds of the Brushy Basin Member of the Morrison Formation

The rock layer enclosing the fossils is a sandstone and conglomerate bed of alluvial or river bed origin known as the Morrison Formation from the Jurassic Period some 150 million years old. The dinosaurs and other ancient animals were carried by the river system which eventually entombed their remains in Utah.

The pile of sediments were later buried and lithified into solid rock. The layers of rock were later uplifted and tilted to their present angle by the mountain building forces that formed the Uinta Mountains during the Laramide orogeny. The relentless forces of erosion exposed the layers at the surface to be found by paleontologists.

The Fremont people lived in the area of what is now Dinosaur National Monument before the 14th century, with archaeological evidence dating from c. 200 to c. 1300. Archaeologists first studied and named the Fremont culture along the Fremont River in south-central Utah and have since traced it through much of the Green and Colorado River drainages.[4]

The Fremont did not build large permanent dwellings; instead, they lived in small bands within natural shelters, such as rock overhangs or shallow caves, or small villages. They consumed plant foods, such as pine nuts, berries, and cactus fruits, as well as wild game, including mule deer, bighorn sheep, smaller mammals, and birds. They also grew corn, beans, and squash, sometimes using irrigation techniques.[4]

The fate of the Fremont culture is unclear. Recent theories suggest that the Fremont’s lifestyle may have changed due to drought or other climate factors, dwindling natural resources, or the influence of other neighboring cultures.[4] They left evidence of their presence in the form of petroglyphs and pictographs of human and animal figures, and abstract designs. Human figures typically have trapezoidal bodies and elaborate decorations that suggest headdresses, earrings, necklaces, or shields. The animal figures include bighorn sheep, birds, snakes, and lizards. Purely abstract or geometric designs, such as circles, spirals, and various combinations of lines, are common. Many designs in the monument are accessible for close viewing, along four trails in Utah, one of which is near the visitor center, and a fifth trail in Colorado.[5] 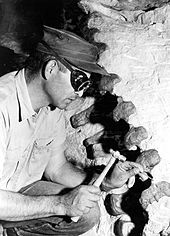 Paleontologist chips rock matrix from a column of vertebrae in the Dinosaur Quarry.

The dinosaur fossil beds (bone beds) were discovered in 1909 by Earl Douglass, a paleontologist working and collecting for the Carnegie Museum of Natural History.[6] He and his crews excavated thousands of fossils and shipped them back to the museum in Pittsburgh, Pennsylvania for study and display.

President Woodrow Wilson proclaimed the dinosaur beds as Dinosaur National Monument in 1915. The monument boundaries have been expanded from the original 80 acres (0.13 sq mi; 0.32 km2) surrounding the dinosaur quarry in Utah, to 210,844 acres (329 sq mi; 853 km2) in Utah and Colorado, encompassing the river canyons of the Green and Yampa.[1]

The plans made by the U.S. Bureau of Reclamation on a ten-dam, billion dollar Colorado River Storage Project began to arouse opposition in the early 1950s when it was announced that one of the proposed dams would be at Echo Park, in the middle of Dinosaur National Monument. The controversy assumed major proportions, dominating conservation politics for years. David Brower, executive director of the Sierra Club, and Howard Zahniser of The Wilderness Society led an unprecedented nationwide campaign to preserve the free-flowing rivers and scenic canyons of the Green and Yampa Rivers. They argued that if a national monument was not safe from development, how could any wildland be kept intact?[citation needed]

On the other side of the argument were powerful members of Congress from western states, who were committed to the project in order to secure water rights, obtain cheap hydroelectric power and develop reservoirs as tourist destinations. After much debate, Congress settled on a compromise that eliminated Echo Park Dam and authorized the rest of the project. The Colorado River Storage Project Act became law on April 11, 1956. It stated, "that no dam or reservoir constructed under the authorization of the Act shall be within any National Park or Monument."[citation needed]

Historians view the Echo Park Dam controversy as signaling the start of an era that includes major conservationist political successes such as the Wilderness Act and the Wild and Scenic Rivers Act.[citation needed]

Places on the list of National Register of Historic Places include:[7]

The Dinosaur National Monument sits on a vast area of desert land in Northwestern Colorado and Northeastern Utah. Typical of high deserts, summer temperatures can be exceedingly hot, while winter temperatures can be very cold. Snowfall is common, but the snow melts rapidly in the arid and sunny climates of these states. Rainfall is very low, and the evaporation rate classifies the area as desert, even though the rainfall exceeds 10 inches. 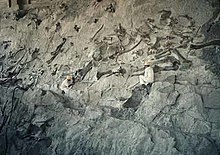 Workers inside the Dinosaur Quarry building

The "Wall of Bones" located within the Dinosaur Quarry building in the park consists of a steeply tilted (67° from horizontal) rock layer which contains hundreds of dinosaur fossils. The enclosing rock has been chipped away to reveal the fossil bones intact for public viewing. In July 2006, the Quarry Visitor Center was closed due to structural problems that since 1957 had plagued the building because it was built on unstable clay. The decision was made to build a new facility elsewhere in the monument to house the visitor center and administrative functions, making it easier to resolve the structural problems of the quarry building while still retaining a portion of the historic Mission 66 era exhibit hall.[9] It was announced in April 2009 that Dinosaur National Monument would receive $13.1 million to refurbish and reopen the gallery as part of the Obama administration's $750 billion stimulus plan.[10] The Park Service successfully rebuilt the Quarry Exhibit Hall, supporting its weight on 70-foot steel micropile columns that extend to the bedrock below the unstable clay.[11] The Dinosaur Quarry was reopened in Fall 2011.

Dinosaur National Monumentat Wikipedia's sister projects
Retrieved from "https://en.wikipedia.org/w/index.php?title=Dinosaur_National_Monument&oldid=964766195"
Categories:
Hidden categories:
The article is a derivative under the Creative Commons Attribution-ShareAlike License. A link to the original article can be found here and attribution parties here. By using this site, you agree to the Terms of Use. Gpedia Ⓡ is a registered trademark of the Cyberajah Pty Ltd.