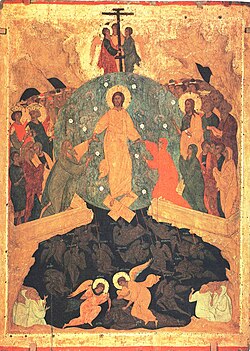 Icon representing Christ's Harrowing of Hell, from the Ferapontov Monastery

Dionisius (Russian: Диони́сий, variously transliterated as Dionisy, Dionysiy, etc., also Dionisius the Wise) (ca. 1440 – 1502) was acknowledged as a head of the Moscow school of icon painters at the turn of the 15th and 16th centuries. His style of painting is sometimes termed "the Muscovite mannerism".

Dionisy's first important commission was a series of icons for the Cathedral of the Dormition in the Moscow Kremlin, executed in 1481. The figures on his icons are famously elongated, the hands and feet are diminutive, and the faces serene and peaceful.

Among his many rich and notable patrons, Joseph of Volokolamsk alone commissioned him to paint more than eighty icons, primarily for the Joseph-Volokolamsk and Pavel-Obnorsk cloisters.

The most comprehensive and the best preserved work of Dionisy is the monumental fresco painting of the Virgin Nativity Cathedral of the Ferapontov Monastery (1495–96) in Vologda Oblast. The frescoes, depicting scenes from the life of the Virgin in singularly pure and gentle colours, are permeated with a solemn and festal mood.

The work at the Ferapontov was executed by Dionisy in collaboration with his sons and disciples, who continued a Dionisiesque tradition after the master's death. His son Feodosy painted the mural of "Michael and Joshua before the battle of Jericho" in the Cathedral of the Annunciation of the Moscow Kremlin in 1508.[1] As his father did not take part in this important commission, it is thought that he had died shortly before that date.

Retrieved from "https://en.wikipedia.org/w/index.php?title=Dionisius&oldid=895801570"
Categories:
Hidden categories:
The article is a derivative under the Creative Commons Attribution-ShareAlike License. A link to the original article can be found here and attribution parties here. By using this site, you agree to the Terms of Use. Gpedia Ⓡ is a registered trademark of the Cyberajah Pty Ltd.