Jump to navigation Jump to search
This article is about the sport. For the film, see DodgeBall: A True Underdog Story. For location service, see Dodgeball (service).
"Dodge Ball" redirects here. For the video game, see Super Dodge Ball.

Dodgeball is a team sport in which players on two teams try to throw balls and hit opponents, while avoiding being hit themselves. The objective of each team is to eliminate all members of the opposing team by hitting them with thrown balls, catching a ball thrown by an opponent, or inducing an opponent to commit a violation, such as stepping outside the court. 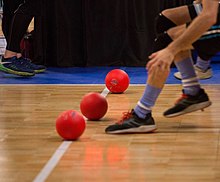 There are many different ball types used around the world, including 8.5-inch rubber, "no-sting" rubber, foam and cloth. USA Dodgeball uses all ball types across multiple tournaments held by them and their member organizations. The World Dodgeball Federation uses primarily foam for their World Championships with plans to include cloth in the coming years, as those are the two balls used most widely across the world.

The WDBF specifies the use of 6 balls with six players per side for their World Championships.[2] Various rule sets governing number of balls and players are used around the world depending on the court size, level of play, and the organization's discretion.

The WDA specifies the use of five balls; certain national rule sets, such as in Austria, specify six.[3] Amateur games typically use from three to ten balls, the number tailored to the size of the court and the number of players. More balls generally adds to the amount of action in a game, but can result in stalemate with many blocks. If there are too few balls, the element of stealth is removed, as players can see all the balls that might hit them. 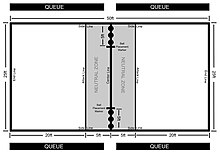 Dodgeball can be played on any surface that has clearly marked boundaries and a center line, such as a basketball or volleyball court or fenced area. Elite Dodgeball specifies a court 50 feet (15 m) by 25 feet (7.6 m), where a zone 10 feet (3.0 m) wide at the junction of the areas is a neutral zone.[4]

Games can also be played outdoors on a soccer pitch or football field. The WDBF organizes games on beaches[5] and USA Dodgeball hosts tournaments at trampoline parks.[6] WDBF specifies a court 60 feet (18 m) by 30 feet (9.1 m) with no neutral zone.[2] 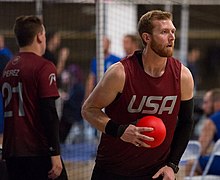 Cody Stidham, at the World Dodgeball Championships in Los Angeles in 2018

In informal dodgeball, balls are initially distributed to players by one of the following methods:

In this latter option, players then rush toward the center line to grab one of the balls. This is called the opening rush. It is never legal to immediately throw such a ball at an opponent; a player grabbing a ball on the center line retreats or throws it back to a teammate.

In WDBF regulations, the ball must be returned behind an "attack line", roughly a third of the way from the back of court. Players may only run for the balls on the right side of the court.[2]

Following distribution, players aim to hit one another. A ball is considered "live" from the moment it leaves a player's hand up until it touches the floor, wall, or ceiling, when it becomes "dead". If a player is hit by an opponent's live ball, they are "out"; if the ball is dead, there is no hit. If a player catches a live ball, the opponent who threw the ball is out and a player on the catcher's team is "revived" from the outbox; however, if they fail to secure the catch, leading to them dropping the ball, the failed catcher is out.

In WDBF regulations, players may "block" a throw with another ball. In this situation, the thrown ball remains live, as it has not hit the floor or a wall, and so can be caught or can still hit a player out. If the blocker drops the ball used to block, they have failed to keep their ball secure and are out. 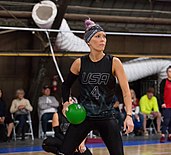 Azalea Donche, preparing to counter at the World Dodgeball Championships in Los Angeles in 2018

Dead balls that leave the court can only be returned to players by each team's designated ball retrievers. Stepping outside the court, including stepping on a boundary line or entering the opponents' zone, is a violation. Other violations include kicking a ball, displaying bad sportsmanship, and stalling (having a ball for over ten seconds and doing nothing with it).[7] The penalty is that the violator is out.[2]

Optional rules may be in effect in informal games of dodgeball or in open matches by agreement:

The following basic tactics are useful:[9]

Many local teams and international teams develop their own tactics and calling systems specific to their style of play. These become more complex in higher leagues, which often requires specific training for the players in calling positions such that they can make rapid, tactical decisions.

In elementary school in the USA, a version is played using a circular court. The team outside the circle has the ball or balls, and the team inside must evade the thrown balls. The players who are hit with the ball may change places with the person who hit them, or they may be out of the game and the last person remaining unhit may be the winner. There are variants. [10] [11]

Similar games in other countries

Retrieved from "https://en.wikipedia.org/w/index.php?title=Dodgeball&oldid=966043593"
Categories:
Hidden categories:
The article is a derivative under the Creative Commons Attribution-ShareAlike License. A link to the original article can be found here and attribution parties here. By using this site, you agree to the Terms of Use. Gpedia Ⓡ is a registered trademark of the Cyberajah Pty Ltd.