Jump to navigation Jump to search
For other uses, see Eagle feather (disambiguation). 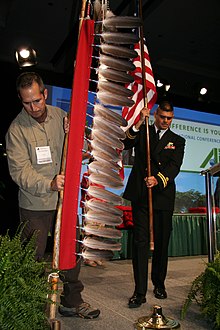 Former NASA astronaut John Herrington, left, presents the Eagle Staff while Lt. Ken Vargas, right, presents the American flag during the presentation of colors at the opening ceremony of the 2009 American Indian Science and Engineering Society National Conference at the Oregon Convention Center in Portland. Herrington is a member of the Chickasaw Nation and Vargas is a member of the Choctaw Nation of Oklahoma.

The eagle feather law provides many exceptions to federal wildlife laws regarding eagles and other migratory birds to enable Native Americans to continue their traditional spiritual and cultural practices.

Under the current language of the eagle feather law, individuals of certifiable American Indian ancestry enrolled in a federally recognized tribe are legally authorized to obtain eagle feathers. Unauthorized persons found with an eagle or its parts in their possession can be fined up to $250,000.[1]

The eagle feather law has incited ongoing debate about the criteria for ownership and possession of eagles and eagle parts. Debates have centered on the differences between enrollment in a federally recognized American Indian tribe, vs a racial, ethnic or self-identified concept of Indigeneity. Some arguments have centered on non-Natives being opposed to Natives having access to anything that all Americans cannot have.

Defenders of the law have argued it is the only legal protection of American Indian spirituality[2] and that because eagle supplies are limited, increasing the number of people who can have eagle parts may make feathers more scarce as well as endanger the lives of too many migratory birds (including threatened or endangered species).

Arguments in favor of amending the law (notably by supporters of Religious Freedom with Raptors, an organization dedicated to changing the eagle feather law) have been made on the grounds that it imposes "racial preferences" for American Indians[3] and that the requirement of tribal enrollment to possess eagles undermines tribal sovereignty rights to fully welcome and include non-Natives in tribal customs involving eagle feathers. It is also argued that eagle permit certification restrictions based on enrollment status impede people with Indian ancestry but who may be unable to prove their ancestry, from exploring their heritage.[4][5] Religious Freedom with Raptors also advocate removing enrollment requirements from 50 CFR 22, stating that enrollment requirements are a racial bias, and that such action would enable all U.S. citizens to apply for eagles or parts from the National Eagle Repository (overseen by the United States Fish and Wildlife Service), it would extend the ability of government-regulated programs and agencies to protect raptors by decreasing the profitability of raptor poaching and trafficking.[6]

Retrieved from "https://en.wikipedia.org/w/index.php?title=Eagle_feather_law&oldid=972108109"
Categories:
The article is a derivative under the Creative Commons Attribution-ShareAlike License. A link to the original article can be found here and attribution parties here. By using this site, you agree to the Terms of Use. Gpedia Ⓡ is a registered trademark of the Cyberajah Pty Ltd.