A map of East Africa showing some of the historically active volcanoes (as red triangles) and the Afar Triangle (shaded at the center), which is a so-called triple junction (or triple point) where three plates are pulling away from one another: the Arabian Plate and two parts of the African Plate—the Nubian and Somali—splitting along the East African Rift Zone.

The East African Rift (EAR) or East African Rift System (EARS) is an active continental rift zone in East Africa. The EAR began developing around the onset of the Miocene, 22–25 million years ago.[1] In the past it was considered to be part of a larger Great Rift Valley that extended north to Asia Minor.

The rift, a narrow zone, is a developing divergent tectonic plate boundary where the African Plate is in the process of splitting into two tectonic plates, called the Somali Plate and the Nubian Plate, at a rate of 6–7 mm (0.24–0.28 in) annually.[2] The rift system consists of three microplates, the Victoria microplate to the north, and the Rovuma and Lwandle microplates to the south. The Victoria microplate is rotating counter-clockwise with respect to the African plate. Its rotation is caused by the configuration of mechanically weaker and stronger lithospheric regions in the EARS.[3][4]

As extension continues, lithospheric rupture will occur within 10 million years; the Somali Plate will break off and a new ocean basin will form.

A series of distinct rift basins, the East African Rift System extends over thousands of kilometers.[5] The EAR consists of two main branches. The Eastern Rift Valley (also known as Gregory Rift) includes the Main Ethiopian Rift, running eastward from the Afar Triple Junction, which continues south as the Kenyan Rift Valley.[6] The Western Rift Valley includes the Albertine Rift, and farther south, the valley of Lake Malawi. To the north of the Afar Triple Junction, the rift follows one of two paths: west to the Red Sea Rift or east to the Aden Ridge in the Gulf of Aden.

The EAR runs from the Afar Triple Junction in the Afar Triangle of Ethiopia through eastern Africa, terminating in Mozambique.[7] The EAR transects through Ethiopia, Kenya, Uganda, Rwanda, Burundi, Zambia, Tanzania, Malawi and Mozambique. It also runs offshore of the coast of Mozambique along the Kerimba and Lacerda grabens, which are joined by the Davie Ridge, a 2,200 km-long (1,400 mi) relic fracture zone that cuts across the West Somali basin, straddling the boundary between Tanzania and Mozambique.[6] The Davie Ridge ranges between 30–120 km (19–75 mi) wide, with a west-facing scarp (east-plunging arch) along the southern half of its length that rises to 2,300 m (7,500 ft) above the sea floor.[6][8] Its movement is concurrent with the EAR.[9]

Over time, many theories have tried to clarify the evolution of the East African Rift. In 1972 it was proposed that the EAR was not caused by tectonic activity, but rather by differences in crustal density. Since the 1990s, evidence has been found in favor of mantle plumes beneath the EAR.[10] Others proposed an African superplume causing mantle deformation.[11][12][13] The question is still debated. 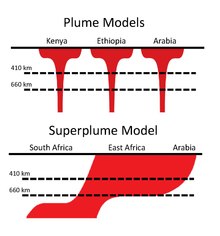 The conceptual extensional difference between plume models and the superplume model placed beneath the East African Rift. Modified from Hansen et al. 2012. 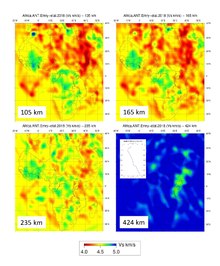 Maps of four different depth slices of the Shear-velocity (Vs) model developed by Emry et al. 2018.[14] The forms of the zones with lower Vs (colors toward red) suggest the hotter structures in the Mantle. The distinguishing fourth map depicts a depth below the 410 km discontinuity where Vs steeps up (getting overall bluer), but it still displays the signature of a plume at the substrate of the East African Rift. In the white box, the Vs vertical profile at 10°N, 40°E illustrates the increase of velocity with depth and the effect of the 410 km discontinuity.

The most recent and accepted view is the theory put forth in 2009: that magmatism and plate tectonics have a feedback with one another, controlled by oblique rifting conditions. At that time it was suggested that lithospheric thinning generated volcanic activity, further increasing the magmatic processes at play such as intrusions and numerous small plumes. These processes further thin the lithosphere in saturated areas, forcing the thinning lithosphere to behave like a mid-ocean ridge.[12]

Although reasonably considered, the exact conformation of deep-rooted mantle plumes is still a matter of active research.[15] Studies that contribute to the broader understanding on the evolution of rifts can be grouped into the techniques of isotope geochemistry, seismic tomography and geodynamical modeling.

The varying geochemical signatures of a suite of Ethiopian lavas suggest multiple plume sources: at least one of deep mantle origin, and one from within the subcontinental lithosphere.[16] In accordance, a study of Halldórsson et al. in 2014 compare the geochemical signature of rare Earth's isotopes from xenoliths and lava samples collected in the EAR. The results corroborate the coexistence of a superplume “common to the entire rift” with another mantle material source being either of subcontinental type or of mid-ocean ridge type.[17]

The geophysical method of seismic tomography is a suitable tool to investigate Earth's subsurface structures deeper than the crust. It is an inverse problem technique that models which are the velocities of the inner Earth that reproduce the seismographic data recorded all around the world. Recent improvements of tomographic Earth models of P-wave and S-wave velocities suggest that a superplume upwelling from the lower mantle at the northeastern EAR feeds plumes of smaller scale into the upper mantle.[18][19]

Parallel to geological and geophysical measures (e.g. isotope ratios and seismic velocities) it is constructive to test hypotheses on computer based geodynamical models. A 3D numerical geodynamical model of the plume-crust coupling was capable of reproducing the lateral asymmetry of the EAR around the Tanzania craton.[20] Numerical modeling of plume-induced continental break-up shows two distinct stages, crustal rifting followed by lithospheric breakup, and the upwelling between stages of an upper mantle plume.[21]

Prior to rifting, enormous continental flood basalts erupted on the surface and uplift of the Ethiopian, Somali, and East African plateaus occurred. The first stage of rifting of the EAR is characterized by rift localization and magmatism along the entire rift zone. Periods of extension alternated with times of relative inactivity. There was also the reactivation of a pre-Cambrian weakness in the crust, a suture zone of multiple cratons, displacement along large boundary faults, and the development of deep asymmetric basins.[5] The second stage of rifting is characterized by the deactivation of large boundary faults, the development of internal fault segments, and the concentration of magmatic activity towards the rifts.

Today, the narrow rift segments of the East African Rift system form zones of localized strain. These rifts are the result of the actions of numerous normal faults which are typical of all tectonic rift zones. As aforementioned, voluminous magmatism and continental flood basalts characterize some of the rift segments, while other segments, such as the Western branch, have only very small volumes of volcanic rock.[15] 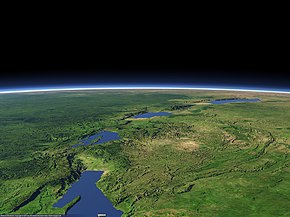 An artificial rendering of the Albertine Rift, which forms the western branch of the East African Rift. Visible features include (from background to foreground): Lake Albert, the Rwenzori Mountains, Lake Edward, the volcanic Virunga Mountains, Lake Kivu, and the northern part of Lake Tanganyika

The African continental crust is generally cool and strong. Many cratons are found throughout the EAR, such as the Tanzania and Kaapvaal cratons. The cratons are thick, and have survived for billions of years with little tectonic activity. They are characterized by greenstone belts, tonalites, and other high-grade metamorphic lithologies. The cratons are of significant importance in terms of mineral resources, with major deposits of gold, antimony, iron, chromium and nickel.[22]

A large volume of continental flood basalts erupted during the Oligocene, with the majority of the volcanism coinciding with the opening of the Red Sea and the Gulf of Aden approximately 30 Ma.[11][15] The composition of the volcanics are a continuum of ultra-alkaline to tholeiitic and felsic rocks. It has been suggested that the diversity of the compositions could be partially explained by different mantle source regions. The EAR also cuts through old sedimentary rocks deposited in ancient basins.[23]

The East African Rift Zone includes a number of active as well as dormant volcanoes, among them: Mount Kilimanjaro, Mount Kenya, Mount Longonot, Menengai Crater, Mount Karisimbi, Mount Nyiragongo, Mount Meru and Mount Elgon, as well as the Crater Highlands in Tanzania. Although most of these mountains lie outside of the rift valley, the EAR created them.[23]

Active volcanos include Erta Ale, DallaFilla, and Ol Doinyo Lengai, the former of which is a continuously active basaltic shield volcano in the Afar Region of northeastern Ethiopia. When DallaFilla erupted in 2008 it was the largest volcanic eruption in Ethiopia in recorded history. The Ol Doinyo Lengai volcano is currently the only active natrocarbonatite volcano in the world. The magma contains almost no silica, making the flow viscosity extremely low. “Its lava fountains crystallize in midair then shatter like glass” according to the National Geographic. Approximately 50 volcanic structures in Ethiopia alone have documented activity since the onset of the Holocene.[5]

The EAR is the largest seismically active rift system on Earth today. The majority of earthquakes occur near the Afar Depression, with the largest earthquakes typically occurring along or near major border faults.[15] Seismic events in the past century are estimated to have reached a maximum moment magnitude of 7.0. The seismicity trends parallel to the rift system, with a shallow focal depth of 12–15 km (7.5–9.3 mi) beneath the rift axis. Further away from the rift axis, focal depths can reach depths of over 30 km (19 mi).[15][24] Focal mechanism solutions strike NE and frequently demonstrate normal dip-slip faults, although left-lateral motion is also observed.[5]

The Rift Valley in East Africa has been a rich source of hominid fossils that allow the study of human evolution.[5][25] The rapidly eroding highlands quickly filled the valley with sediments, creating a favorable environment for the preservation of remains. The bones of several hominid ancestors of modern humans have been found here, including those of "Lucy", a partial australopithecine skeleton discovered by anthropologist Donald Johanson dating back over 3 million years. Richard and Mary Leakey have done significant work in this region also.[26] More recently, two other hominid ancestors have been discovered here: a 10-million-year-old ape called Chororapithecus abyssinicus, found in the Afar rift in eastern Ethiopia, and Nakalipithecus nakayamai, which is also 10 million years old.[27]

Retrieved from "https://en.wikipedia.org/w/index.php?title=East_African_Rift&oldid=961736045"
Categories:
Hidden categories:
The article is a derivative under the Creative Commons Attribution-ShareAlike License. A link to the original article can be found here and attribution parties here. By using this site, you agree to the Terms of Use. Gpedia Ⓡ is a registered trademark of the Cyberajah Pty Ltd.