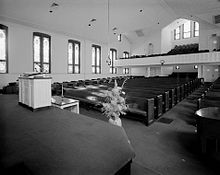 Interior of the church building in 1979

In 1999, a new 1,700-seat church building called the Horizon Sanctuary was inaugurated on the site of the Martin Luther King Jr. National Historical Park.[5]

Since 2005, Raphael Warnock has been the senior pastor of Ebenezer Baptist Church;[6] he is the fifth person to serve as Ebenezer's senior pastor since its founding.[7] On January 30, 2020, Warnock announced his campaign for Kelly Loeffler's Senate seat during the 2020 special election.[7]

Retrieved from "https://en.wikipedia.org/w/index.php?title=Ebenezer_Baptist_Church_(Atlanta,_Georgia)&oldid=971413348"
Categories:
Hidden categories:
The article is a derivative under the Creative Commons Attribution-ShareAlike License. A link to the original article can be found here and attribution parties here. By using this site, you agree to the Terms of Use. Gpedia Ⓡ is a registered trademark of the Cyberajah Pty Ltd.