Edmund Kirby Smith (May 16, 1824 – March 28, 1893) was a career United States Army officer who fought in the Mexican–American War. He later joined the Confederate States Army in the Civil War, and was promoted to general in the first months of the war. He was notable for his command of the Trans-Mississippi Department after the fall of Vicksburg to the United States

Smith was wounded at First Bull Run and distinguished himself during the Heartland Offensive, the Confederacy's unsuccessful attempt to capture Kentucky in 1862. He was appointed as commander of the Trans-Mississippi Department in January 1863. The area included most actions east of the Rocky Mountains and west of the Mississippi River. In 1863, Smith dispatched troops in an unsuccessful attempt to relieve the Siege of Vicksburg. After Vicksburg was captured by the Union in July, the isolated Trans-Mississippi zone was cut off from the rest of the Confederacy, and became virtually an independent nation, nicknamed 'Kirby Smithdom'. In the Red River Campaign of Spring 1864, he commanded victorious Confederate troops under General Richard Taylor, who defeated a combined Union army/navy assault under Nathaniel P. Banks.

On June 2, 1865, Smith surrendered his army at Galveston, Texas, the last general with a major field force. He quickly escaped to Mexico and then to Cuba to avoid arrest for treason. His wife negotiated his return during the period when the federal government offered amnesty to those who would take an oath of loyalty. After the war, Smith worked in the telegraph and railway industries. He also served as a college professor of mathematics at the University of the South in Tennessee. He botanized plant specimens and bequeathed his collection to the University of Florida.[1][2][3]

Edmund Kirby Smith was born in 1824 in St. Augustine, Florida, as the youngest child of Joseph Lee Smith, an attorney, and Frances Kirby Smith. Both his parents were natives of Litchfield, Connecticut, where their older children were born. The family moved to Florida in 1821, as the senior Smith was appointed as a Superior Court judge in the new Florida Territory, acquired by the U.S. from Spain.[4][5] Older siblings included Ephraim, born in 1807; and sisters Frances, born in 1809,[4] and Josephine, who died in 1835, likely of tuberculosis.[6][7] He was interested in botany and nature,[8] but in 1836, Smith's parents sent their second son to a military boarding school in Virginia,[9] and strongly encouraged a military career. He later enrolled in the United States Military Academy at West Point, New York.

In 1837, his sister Frances married Lucien Bonaparte Webster, a West Point graduate from Vermont and career Army artillery officer, whom she met when he was stationed at Fort Marion in St. Augustine. His commanding officer at the fort was the young Smiths' uncle. Webster later served in the Mexican–American War and died of yellow fever in 1853, when stationed on the Texas frontier at Fort Brown.[10]

On July 1, 1841, Kirby Smith entered West Point and graduated four years later in 1845, ranking 25th out of 41 cadets.[8] While there he was nicknamed "Seminole", after the Seminole people of Florida who had successfully resisted removal by the US. He was commissioned as a brevet second lieutenant in the 5th U.S. Infantry on July 1, 1845. Smith was promoted to second lieutenant on August 22, 1846, now serving in the 7th U.S. Infantry.[11] 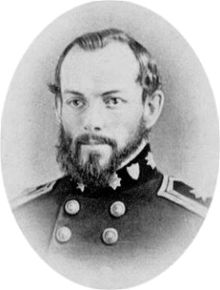 In the Mexican–American War, Smith served under General Zachary Taylor at the Battle of Palo Alto and the Battle of Resaca de la Palma.[5] He served under General Winfield Scott later, and received brevet promotions to first lieutenant for Cerro Gordo and to captain for Contreras and Churubusco. His older brother, Ephraim Kirby Smith (1807–1847), who graduated from West Point in 1826 and was a captain in the regular army, served with him in the 5th U.S. Infantry in the campaigns with both Taylor and Scott. Ephraim died in 1847 from wounds suffered at the Battle of Molino del Rey.[9]

After that war, Kirby Smith served as a captain (from 1855) in the 2nd U.S. Cavalry, primarily in Texas. (From that year on through the war, Smith was accompanied by the youth Alexander Darnes, then 15, a mixed-race slave owned by his family, who served as his valet until emancipation and who may have been his half-brother.) [12][13]

Kirby Smith also taught at West Point after the war. He collected and studied materials as a botanist; like many other military officers, he was also a scientist. He donated to the Smithsonian Institution some of his collection and reports from his time at West Point.[14] Smith continued his botanical studies as an avocation for the remainder of his life. He is credited with collecting and describing several species of plants native to Tennessee and Florida.[15]

Kirby Smith was assigned to teaching mathematics at West Point, from 1849 to 1852. According to his letters to his mother, he was happy with this environment.[16]

Returning to troop-leading assignments, Smith served in the Southwest. On May 13, 1859, he was wounded in his thigh while fighting Comanche in the Nescutunga Valley of Kansas. also known as the Battle of Crooked Creek (Kansas).[5] When Texas seceded from the Union in 1861, Smith, promoted to major on January 31, 1861, refused to surrender his command at Camp Colorado in what is now Coleman, Texas, to the Texas State forces under Col. Benjamin McCulloch; he expressed his willingness to fight to hold it.[9] On April 6, he resigned his commission in the U.S. Army to join the Confederacy.[11]

On March 16, 1861, Smith entered the Confederate forces as a major in the regular artillery; that day he was transferred to the regular cavalry with the rank of lieutenant colonel.[11] After serving briefly as Brig. Gen. Joseph E. Johnston's assistant adjutant general in the Shenandoah Valley,[17] Smith was promoted to brigadier general on June 17, 1861. He was given command of a brigade in the Army of the Shenandoah, which he led at the First Battle of Bull Run on July 21.[18] Wounded severely in the neck and shoulder, he recuperated while commanding the Department of Middle and East Florida. He returned to duty on October 11 as a major general and division commander in the Confederate Army of Northern Virginia.[19]

In February 1862, Smith was sent west to command the Army of East Tennessee. Cooperating with Gen. Braxton Bragg in the invasion of Kentucky, he scored a victory at the Battle of Richmond, Kentucky on August 30, 1862, but did not link up with Bragg's army until after the Battle of Perryville. On October 9, he was promoted to the newly created grade of lieutenant general, becoming a corps commander in Bragg's Army of Tennessee.[19] Smith received the Confederate "Thanks of Congress" on February 17, 1864, for his actions at Richmond.[a]

On January 14, 1863, Smith was transferred to command the Trans-Mississippi Department (primarily Arkansas, Western Louisiana, and Texas) and he remained west of the Mississippi River for the balance of the war, based part of this time in Shreveport, Louisiana. As forces under Union Maj. Gen. Ulysses S. Grant tightened their grip on the river, Smith attempted to intervene. However, his department never had more than 30,000 men stationed over an immense area and he was not able to concentrate forces adequately to challenge Grant nor the Union Navy on the river.[19] 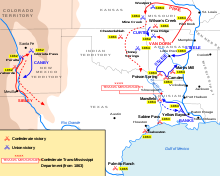 A Map of actions in Trans-Mississippi Department, "Kirby Smithdom", including Price's failed invasion of Missouri

Following the Union capture of the remaining strongholds at Vicksburg and Port Hudson and their closing of the Mississippi to the enemy, Smith was virtually cut off from the Confederate capital at Richmond. He had to command a nearly independent area of the Confederacy, with all of the inherent administrative problems. The area became known in the Confederacy as "Kirby Smithdom".[20]

Kirby Smith resided in Shreveport during the Red River Campaign of 1864.

In the spring of 1864, Lt. Gen. Richard Taylor, directly under Smith's command, soundly defeated Maj. Gen. Nathaniel P. Banks at the Battle of Mansfield in the Red River Campaign on April 8, 1864.[21] After the Battle of Pleasant Hill on April 9, Smith joined Taylor and dispatched half of Taylor's army, Walker's Greyhounds, under the command of Maj. Gen. John George Walker, northward to defeat Union Maj. Gen. Frederick Steele's incursion into Arkansas. This decision, strongly opposed by Taylor, caused great enmity between the two men.[22]

With the pressure relieved to the north, Smith attempted to send reinforcements east of the Mississippi. But, as in the case of his earlier attempts to relieve Vicksburg, it proved impossible due to Union naval control of the river. Instead he dispatched Maj. Gen. Sterling Price, with all available cavalry, on an unsuccessful invasion of Missouri. Thereafter he conducted the war west of the river principally through small raids and guerrilla activity.[23]

By now a full general (as of February 19, 1864, one of seven generals in the Confederate Army),[19] Smith negotiated the surrender of his department on May 26, 1865. While Brigadier General Stand Watie and the 1st Cherokee Mounted Rifles regiment did not surrender until 23 June 1865, Kirby was the last full general to do so and signed the terms of surrender in Galveston, Texas, on June 2, nearly 8 weeks after Robert E. Lee's surrender.[5] He immediately left the country for Mexico and then to Cuba, to escape potential prosecution for treason.[24] In August that year, General Beauregard's house near New Orleans was surrounded by Federal troops who suspected the general of harboring Smith. All the inhabitants were locked in a cotton press overnight. Beauregard complained to General Sheridan, who expressed his annoyance at the treatment of the high-ranking officer, his erstwhile enemy.[25] Smith returned to the United States later that year to take an oath of amnesty at Lynchburg, Virginia, on November 14, 1865.[11]

In August 1861, Kirby Smith met Cassie Selden (1836–1905), the daughter of Samuel S. Selden of Lynchburg. While recovering from being wounded at the First Battle of Manassas, he still found time for wooing. The couple married on September 24. Cassie wrote on October 10, 1862 from Lynchburg, asking what to name their first child. She suggested "something uncommon as I consider her an uncommon baby." The new baby was later named Caroline.[26]

The couple briefly reunited when Cassie followed her husband to Shreveport in February 1863. In the spring of 1864, she moved to Hempstead, Texas, where she remained for the duration of the war. After the war's end, Cassie traveled to Washington to negotiate for her husband's return to the United States from Cuba where he had fled.[27]

Reynold, William, Joseph, and Ephraim all played for the Sewanee Tigers football team. Joseph and Ephraim both achieved All-Southern status in football. Joseph was a member of the famed 1899 "Iron Men" and Ephraim was selected for Sewanee's All-Time football team.[28]

After the war, Kirby Smith was active in the telegraph business and in higher education. From 1866 to 1868, he was president of the Atlantic and Pacific Telegraph Company. When that effort ended in failure, he started a preparatory school in New Castle, Kentucky, which he directed until it burned in 1870.[9] In 1870, he combined efforts with former Confederate General Bushrod Johnson.[29] He served as the chancellor of the University of Nashville from 1870 to 1875.[30]

In 1875, Kirby Smith left that post to become professor of mathematics and botany at the University of the South at Sewanee, Tennessee.[8] Part of his collection from those years was donated to the universities of North Carolina and Harvard, and to the Smithsonian Institution. He kept up a correspondence with botanists at other institutions. He taught at the University of the South until he died of pneumonia in 1893. He was the last surviving full general from the Civil War. He is buried in the University Cemetery at Sewanee.[9]

Retrieved from "https://en.wikipedia.org/w/index.php?title=Edmund_Kirby_Smith&oldid=969204291"
Categories:
Hidden categories:
The article is a derivative under the Creative Commons Attribution-ShareAlike License. A link to the original article can be found here and attribution parties here. By using this site, you agree to the Terms of Use. Gpedia Ⓡ is a registered trademark of the Cyberajah Pty Ltd.