El Malpais National Monument is a National Monument located in western New Mexico, in the Southwestern United States.[3] The name El Malpais is from the Spanish term Malpaís, meaning badlands, due to the extremely barren and dramatic volcanic field that covers much of the park's area.

It is on the Trails of the Ancients Byway, one of the designated New Mexico Scenic Byways.[4]

The lava flows, cinder cones, and other volcanic features of El Malpais are part of the Zuni-Bandera volcanic field, the second largest volcanic field in the Basin and Range Province.[3] This volcanically active area on the southeast margin of the Colorado Plateau is at the intersection of the Rio Grande Rift Basin, with its deep normal faulting, and the ancient Jemez Lineament. These two features provide the crustal weaknesses that recent magmatic intrusions and Cenozoic volcanism are attributed to.

The rugged pāhoehoe and ʻaʻā lava flows of the Zuni-Bandera eruptions (also called the Grants Lava Flows) filled a large basin, created by normal faulting associated with the Rio Grande Rift, between the high mesas of the Acoma Pueblo to the east, Mt. Taylor to the north, and the Zuni Mountain anticline to the northwest. Vents associated with these flows include Bandera Crater, El Calderon, and several other cinder cones; more than a dozen older cinder cones follow a roughly north-south distribution along the Chain of Craters west of the monument.

Looking out of Giant Ice Cave in the Big Tube area

El Malpais has many lava tubes open to explore (unguided) with a free caving permit, available at NPS-staffed facilities. There are currently four caves accessible by permit: Junction and Xenolith caves in the El Caldron area, and Big Skylight and Giant Ice caves in the Big Tubes area. From December 2010 to June 2013, all caves were temporarily closed to recreational use to protect bats from the spread of White Nose Syndrome (WNS) until a permitting process, including visitor screening for WNS, could be implemented.[5]

A nearby scenic overlook at Sandstone Bluffs offers spectacular panoramic views over the monument's lava flows.

Some of the oldest Douglas Fir (Pseudotsuga) trees on earth, of the Pseudotsuga subspecies Rocky Mountain Douglas-fir (Pseudotsuga menziesii subsp. glauca), can be found living in El Malpais Monument.[6]

A map of late Cenozoic volcanism around the Colorado Plateau, with the location of El Malpais National Monument highlighted.

The area around El Malpais was used for resources, settlement, and travel by Oasisamerica cultures, Native Americans, and Spanish colonial and pioneer exploration. Archaeological sites remain in the park.[7]

In the 1940s the Malpais lava field was one of the eight candidate sites considered by the Manhattan Project to test detonate the first atomic bomb, the Trinity nuclear test, which did occur to the south at White Sands Proving Ground.[8] The Department of Defense did use the site as a bombing range to train pilots during World War II.

After the war, the Bureau of Land Management became the administrator of the area. In 1987, President Reagan signed Pub.L. 100–225 that created El Malpais National Monument and designated it a unit of the National Park Service. It is jointly managed with the nearby El Morro National Monument. 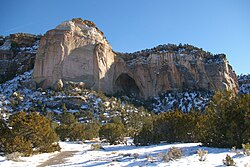 The second portion of the book Brave New World by Aldous Huxley takes place on the "savage reservation", which is located on land encompassing the park's area.

The malpais is the setting for a western story, "Flint" (November, 1960) by Louis L'Amour. Flint is a successful business man who thinks he is dying of cancer and returns to a hidden campsite within the malpais he had learned of in his youth.

A scene in Cormac McCarthy's novel Blood Meridian takes place on the malpais.

Retrieved from "https://en.wikipedia.org/w/index.php?title=El_Malpais_National_Monument&oldid=961920635"
Categories:
Hidden categories:
The article is a derivative under the Creative Commons Attribution-ShareAlike License. A link to the original article can be found here and attribution parties here. By using this site, you agree to the Terms of Use. Gpedia Ⓡ is a registered trademark of the Cyberajah Pty Ltd.