Jump to navigation Jump to search
A political territory that is ruled by a dynastic Muslim monarch styled emir
This article is about the political term "emirate". For other uses, see Emirates.
"Imarat" redirects here. For places in Iran, see Imarat, Iran.

An emirate is a political territory that is ruled by a dynastic Arabic or Islamic monarch-styled emir. The term may also refer to a kingdom.[1]

Etymologically emirate or amirate (Arabic: إمارة‎ imārah, plural: إمارات imārāt) is the quality, dignity, office, or territorial competence of any emir (prince, commander, governor, etc.). In English, the term is pronounced /ˈɛmərət, -ɪər-, -ɪt, -eɪt/ or /ɛˈmɪərət, -ɪt, -eɪt, iˈ-/ in British English and /ˈɛmərət/ or /ɪˈmɪərət/ in American English.[2]

The United Arab Emirates is a federal state that comprises seven federal emirates, each administered by a hereditary emir, these seven forming the electoral college for the federation's President and Prime Minister. As most emirates have either disappeared, been integrated in a larger modern state or changed their rulers' styles, e.g. to malik (Arabic for king) or sultan, such true emirate-states have become rare.

Furthermore, in Arabic the term can be generalized to mean any province of a country that is administered by a member of the ruling class, especially of a member (usually styled emir) of the royal family, as in Saudi Arabian governorates. 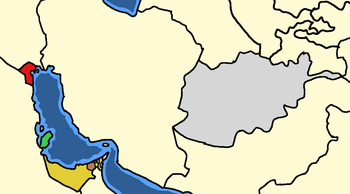 A list of emirates that have either ceased to exist, are not recognized and hold no real power, or were integrated into another country and preserved as "traditional states" arranged by location and in order of the date of the first leader styled "emir."

Retrieved from "https://en.wikipedia.org/w/index.php?title=Emirate&oldid=960346148"
Categories:
Hidden categories:
The article is a derivative under the Creative Commons Attribution-ShareAlike License. A link to the original article can be found here and attribution parties here. By using this site, you agree to the Terms of Use. Gpedia Ⓡ is a registered trademark of the Cyberajah Pty Ltd.