Etowah Indian Mounds (9BR1) are a 54-acre (220,000 m2) archaeological site in Bartow County, Georgia south of Cartersville, in the United States. Built and occupied in three phases, from 1000–1550 AD, the prehistoric site is located on the north shore of the Etowah River. Etowah Indian Mounds Historic Site is a designated National Historic Landmark, managed by the Georgia Department of Natural Resources. It is the most intact Mississippian culture site in the Southeastern United States.

In the 19th century, European-American settlers mistakenly believed that the mounds had been built by the historic Cherokee, who occupied the region at the time. But researchers now know that the Iroquoian-speaking tribe did not reach this part of Georgia until the late 18th century and could not have built the mounds.

Late 20th-century studies showed the mounds were built and occupied by prehistoric indigenous peoples of the South Appalachian Mississippian culture (a regional variation of the Mississippian culture)[3] of eastern North America. They were ancestors of the historic Muskogean language-speaking Muscogee Creek people who later emerged in this area.[4] Etowah is a Muskogee word derived from italwa meaning "town". The federally recognized Muscogee (Creek) Nation and Poarch Band of Creek Indians consider Etalwa to be their most important ancestral town. From 1000–1550 AD, Etowah was occupied by a series of cycling chiefdoms (see Coosa confederacy) over the course of five and a half centuries.[5]

Tykeon Wilkes used changes in ceramic styles across multiple sites in the Etowah River Valley to determine timelines for the region. The ceramics found at Etowah and other regional sites have been reconstructed and allow Etowah to be placed into the following sequences.[6] The town was occupied in three distinct archaeological phases: ca. 1000–1200 AD, ca. 1250–1375 AD, and ca. 1375–1550 AD. It was at its peak roughly from 1325–1375 AD.[7] 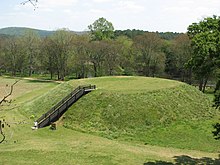 Mound B, seen from Mound A

Etowah has three main platform mounds and three lesser mounds. The Temple Mound, Mound A, is 63 feet (19 m) high, taller than a six-story building, and covers 3 acres (12,000 m2) at its base. In 2005-2008 ground mapping with magnetometers revealed new information and data, showing that the site was much more complex than had previously been believed. The study team has identified a total of 140 buildings on the site. In addition, Mound A was found to have had four major structures and a courtyard during the height of the community's power.[7] Mound B is 25 feet (7.6 m) high; Mound C, which rises 10 feet (3.0 m), is the only one to have been completely excavated. Magnetometers enabled archaeologists to determine the location of temples of log and thatch, which were originally built on top of the mounds. Adjacent to the mounds is a raised ceremonial plaza, which was used for ceremonies, stickball and chunkey games, and as a bazaar for trade goods.

When visiting the Etowah Mounds, guests can view the "borrow pits" (which archaeologists at one time thought were moats) which were dug out to create the three large mounds in the center of the park.

Older pottery found on the site suggest that there was an earlier village (ca. 200 BC–600 AD) associated with the Swift Creek culture. This earlier Middle Woodland period occupation at Etowah may have been related to the major Swift Creek center of Leake Mounds, approximately two miles downstream (west) of Etowah.

War was commonplace; many archaeologists believe the people of Etowah battled for hegemony over the Alabama river basin with those of Moundville, a Mississippian site in present-day Alabama. The town was protected by a sophisticated semicircular fortification system. An outer band formed by nut tree orchards prevented enemy armies from shooting masses of flaming arrows into the town. A 9 feet (2.7 m) to 10 feet (3.0 m) deep moat blocked direct contact by the enemy with the palisaded walls. It also functioned as a drainage system during major floods, common for centuries, from this period and into the 20th century. Workers formed the palisade by setting upright 12 feet (3.7 m) high logs into a ditch approximately 12 inches (300 mm) on center and then back-filling around the timbers to form a levee. Guard towers for archers were spaced approximately 80 feet (24 m) apart. 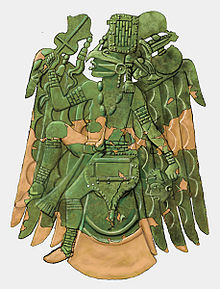 Illustration of a Rogan Plate (Catalogue No. A91117, Department of Anthropology, NMNH, Smithsonian), a repoussé copper plate falcon dancer found at Etowah, but believed to have been fabricated at Cahokia in the 13th century[8]

The artifacts discovered in burials within the Etowah site indicate that its residents developed an artistically and technically advanced culture. Numerous copper tools, weapons and ornamental copper plates accompanied the burials of members of Etowah's elite class. Where proximity to copper protected the fibers from degeneration, archaeologists also found brightly colored cloth with ornate patterns. These were the remnants of the clothing of social elites.

Numerous clay figurines and ten Mississippian stone statues have been found through the years in the vicinity of Etowah. Many are paired statues, which portray a man sitting cross-legged and a woman kneeling. The female figures wear wrap-around skirts and males are usually portrayed without visible clothing, although both usually have elaborate hairstyles. The pair are thought to represent lineage ancestors. Individual statues of young women also show them kneeling, but with additional characteristics such as visible sex organs, which are not visible on the paired statues. This female figure is thought to represent a fertility or Earth Mother goddess.[9] The birdman, hand in eye, solar cross, and other symbols associated with the Southeastern Ceremonial Complex appear in many artifacts found at Etowah.

The Etowah River is a tributary of the Coosa and Alabama rivers, and forms the border between the southern edge of the Ridge and Valley Appalachians and the Piedmont Plateau. Trade and tribute brought whelk shells from the Gulf of Mexico; copper, mica and flint from the Cumberland Plateau; and "galena, graphite, and an array of ochers to provide pigment for painting buildings, bodies, and works of art; greenstone and marble to furnish raw material for tools, weapons and ritual objects" from the Piedmont.[10] The loamy riverbed soil could be easily tilled with digging sticks and stone and shell hoes. Its fertility was annually renewed by the river's floods. Free of frost most of the year, the land yielded rich harvests of corn, beans, and squash.

Chestnut, walnut, hickory, and persimmon trees that grew in upland forests provided nuts and fruit for both the people of Etowah and the white-tailed deer, wild turkey, and smaller game they hunted. Other plants that were gathered include stinging nettle, paper mulberry, and a native holly whose leaves and stems were brewed into the Black drink imbibed in ritual purification ceremonies. River cane grew in dense thickets and was made into arrow shafts, thatching for roofs, splits for baskets, benches, and mats for walls and floors.

River shoals abounded in freshwater mussels and turtles. The Mississippians built v-shaped rock weirs to pen and channel catfish, drum and gar, which they caught in rivercane baskets.[11] Researchers have found remains of more than 100 rock weirs along the Etowah River. One has been restored within the grounds of the historic site.[12]

Archaeological research on the subject is not conclusive, but the Etowah site may be the same as a village of a similar name visited by Spanish conquistador Hernando de Soto in 1540. The chroniclers of the de Soto Expedition made no mention of any large mounds in their record of visiting a town named Itaba. Itaba means "boundary" or trail crossing in the Alabama language. The origin of the English name for the mounds, Etowah, is an archaic Muscogee place name, Etalwa. Etalwa probably referred to the solar cross symbol originally. In the modern Muskogee language it means "town."[13]

Until studies of the late 20th century were publicized, most Georgians believed Etowah to have been built by the well-known historic Cherokee. But, the Cherokee did not arrive in this part of Georgia until the late 18th century, two to seven centuries after the mounds' construction. Scholars have evaluated sufficient evidence to determine the mound complex was unquestionably built and occupied by peoples more closely related to the Muskogean-speaking Creeks.[citation needed]

Both the Muscogee (Creek) Nation and Poarch Band of Creek Indians consider Etalwa to be their most important ancestral town. Related to this, the official title of the Creek Nation's Principal Chief is Etalwa Mikko, from this source (the Creek word for chief is miko). A new, large-scale model of Etalwa is on permanent display in the rotunda of the Muskogee (Creek) Capitol in Okmulgee, Oklahoma.

History of excavation and studies

Missionary Elias Cornelius visited the site in 1817 and described it in his journal published by Bela Bates Edwards in 1833. He realized a mound must have been over two hundred years old, due to the size of trees growing on it, but had little idea of its real history.[15] Cyrus Thomas and John P. Rogan tested the site for the Smithsonian Institution in 1883. But, the first well-documented archaeological inquiry at the site did not begin until the winter of 1925, conducted by Warren K. Moorehead. His excavations into Mound C at the site revealed a rich array of Mississippian culture burial goods. These artifacts, along with the collections from Cahokia, Moundville Site, Lake Jackson Mounds, and Spiro Mounds, would comprise the majority of the materials which archaeologists used to define the Southeastern Ceremonial Complex (SECC). The professional excavation of this enormous burial mound contributed major research impetus to the study of Mississippian artifacts and peoples. It greatly increased the understanding of pre-Contact Native American artwork.

In 1947, the government built the Allatoona Dam upstream for flood control. The Etowah site was designated a National Historic Landmark in 1964.

Retrieved from "https://en.wikipedia.org/w/index.php?title=Etowah_Indian_Mounds&oldid=962151633"
Categories:
Hidden categories:
The article is a derivative under the Creative Commons Attribution-ShareAlike License. A link to the original article can be found here and attribution parties here. By using this site, you agree to the Terms of Use. Gpedia Ⓡ is a registered trademark of the Cyberajah Pty Ltd.