Eviction in the United States 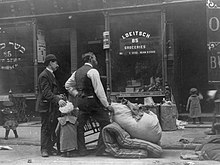 The procedure and rate of eviction in the United States varies by locality. Landlord-initiated expulsion of tenants is not officially tracked or monitored by the Federal government, and has historically not been subject to comprehensive analysis. The 2016 publication of the book Evicted: Poverty and Profit in the American City by Matthew Desmond raised awareness of the issue. A database created by Desmond found that landlords had been granted eviction notices for one in 50 renter households in analyzed regions. This rate only counts evictions that engage the legal process, as many evictions are informally conducted between landlords and renters, it likely undercounts actual evictions.[1]

Most evictions in the United States occur because the tenant cannot or will not pay rent. Landlords can also expel tenants for breaking the law, damaging property, sub-leasing, or causing a disturbance. In most American municipalities, tenants who haven't violated their lease can be expelled, in what is known as "no-fault evictions."[2]

Most renting families under the poverty line spend more than 50% of their income on rent, with one in four such families spending over 70% of their income on rent and utilities. About one in four low-income renters receives housing assistance.[2] Eviction rates are higher in communities with multiple aggravating factors, including high levels of poverty. These include local laws that give advantage to landowners and a lack of available affordable housing that would increase market pressures to keep rents low.[1]

When housing pressures are extreme, even middle-class and working class renters are evicted by landlords eager to capitalize on the rising market rates, such as in San Francisco during the various tech booms. In such circumstances, landlords may seize upon minor violations that were previously tolerated, such as keeping a small pet or storing a bicycle in the hallway, to evict renters. The situation in California is aggravated by the Ellis Act, which allows landlords to evict tenants and immediately sell the vacant apartments as condominiums.[3]

Evictions disproportionately affect low-income women, in particular women of color.[2] Approximately one in five African-American women renters report being evicted as some point in their life, while the equivalent rate for white women renters is one in 15.[4] Victims of domestic violence and families with children are also at high risk of eviction.[2] Renters who appear in eviction court are three times more likely to actually be evicted if they live with children.[4]

Eviction is a cause of poverty, as well as a result of it. The loss of home often results in the loss of community connections, as well as children being forced into a new school. Possessions are routinely lost, as they are placed outside on the sidewalk or placed in storage that can only be accessed by paying a fee. A legal eviction typically goes on the permanent record of the boarder, resulting in automatic rejection by other landlords or housing authorities.[2]

Persons who are evicted lose their jobs at higher rates, either because of the new stress or because the job is no longer easily accessible in a new residence. Mental health often suffers, with one study finding that evicted mothers reported higher rates of depression two years after being expelled.[2]

There is no government reporting system on eviction, so variance by location and time were, at best, little understood and, at worst, invisible. This began to change with the implementation of Princeton University's Eviction Lab which published the results of an analysis of 900,000 eviction notices that occurred in 2016.[1]

Retrieved from "https://en.wikipedia.org/w/index.php?title=Eviction_in_the_United_States&oldid=960966610"
Categories:
The article is a derivative under the Creative Commons Attribution-ShareAlike License. A link to the original article can be found here and attribution parties here. By using this site, you agree to the Terms of Use. Gpedia Ⓡ is a registered trademark of the Cyberajah Pty Ltd.