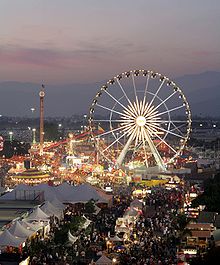 Fairplex, known prior to 1984 as the Los Angeles County Fairgrounds, has been the home of the L.A. County Fair since 1922. It is located in the city of Pomona, California. The L.A. County Fair is now held during the month of September, but the facility is used year-round to host a variety of educational, commercial, and entertainment such as trade and consumer shows, conventions, and sporting events.

Fairplex is owned by Los Angeles County, but is leased to and is governed by an independent, self-supporting non-profit organization, the Los Angeles County Fair Association, which manages and produces the county fair and re-invests surplus revenues generated by the fair and other events in the maintenance and development of the facility.[1]

Most of the livestock and small stock shows during the county fair including 4-H competitions have been dismantled and the buildings allowed to deteriorate. Once a prestigious livestock show with show horses, cattle, swine, goats, sheep, poultry, and rabbit competitions., the management decided to stop funding this historic aspect of the fair much to the disappointment of the region's livestock community. The management hired a decorator to attach faux barn and country scenes to the show buildings. In place of 4-H kids and their projects, management rents petting zoo animals. The management has taken the further step to discontinue allowing any such shows during the off season. Many historic local clubs and associations were displaced with not having a safe venue for their events as they had for over 50 years.[citation needed]

The RailGiants Train Museum is owned and maintained by the Southern California Chapter of the Railway & Locomotive Historical Society, and until November 2013 was the home to one of the world's largest steam locomotives, Union Pacific Big Boy 4014, which has been acquired by the Union Pacific Railroad and was moved to Cheyenne, Wyoming for a multi-year restoration that returned 4014 to operation in May 2019.

The garden railroad train exhibit is called the Fairplex Garden Railroad.[2] It has over 80 volunteers and from Nov through July, runs the second Sunday of every month, from 11:00am to 4:00pm, for the general public. The FGRR gears up every year for the L.A. County Fair, its primary show. In December various members run their Christmas trains. The garden railroad uses G Scale trains.

There is a large Off Track Horse Wagering Racebook at Fairplex, located on White Avenue, about a mile north from McKinley Avenue in Pomona. The OTB accepts racing signals from the United States, Canada, and Australia. There is also a restaurant and Sports Bar called the Finish Line Grill. Next to the OTB is Barretts Sales and Racing, a horse facility with a (now closed) 5/8 mile racetrack and a grandstand seating 10,000. Barrett's provided equine training facilities, horse show facilities, and the Barrett's Equine Limited horse auction complex.[3] The grandstand facility is also used to host concerts and special events accommodating up to 15,000 patrons. Barrett's and the Los Angeles County Fair Association reached an agreement in February 2013 for naming rights, and the race meet was referred to as the "Barrett's Race Meet at Fairplex."[4]

The Fairplex race meeting was moved to Los Alamitos Racetrack in 2014.

Fairplex is home to a large dragstrip known as the Auto Club Raceway at Pomona, which hosts both the opening and closing rounds of the NHRA drag racing series. Fairplex is also the location of the Wally Parks NHRA Motor Sports Museum, presented by the Automobile Club of Southern California.[5]

Fairplex is the site of the Millard Sheets Center for the Arts at Fairplex, a year-round education and exhibit space affiliated with The Smithsonian Institution.[6] The center is located in the historic Fine Arts building, a 12,000-square-foot (1,100 m2) facility designed by architect Claud Beelman and erected by the WPA in 1937. In 1994 the building was renamed in honor of artist Millard Sheets, a Pomona native who was the director of the county fair's art programs from 1930 to 1956.

Construction of the Pomona Assembly Center.

During World War II, the Los Angeles County Fairgrounds was the site of one of several temporary detention camps (also known as assembly centers) located throughout the West. The first phase of the mass incarceration of 97,785 Californians of Japanese ancestry during the war. Most internees were U.S. citizens. Pursuant to Executive Order 9066, signed by President Franklin D. Roosevelt on February 19, 1942, fifteen makeshift detention facilities were constructed at various California racetracks, fairgrounds and labor camps. These facilities confined Japanese American citizens until permanent location centers such as those in Manzanar and Tule Lake in California could be built in more isolated areas of the country. Beginning on March 30, 1942, native-born American citizens and long-time legal residents of Japanese ancestry living in California were ordered to surrender themselves for detention.

Construction on the Pomona assembly center began on March 21, 1942, and the camp officially opened on May 7, 1942. The Pomona Facility consisted of 309 barracks, 8 mess halls, and 36 shower and latrine facilities. The first group of 72 Japanese American citizens arrived on May 9. By May 15, 1942 the Pomona site was operating near capacity, with 4,270 internees. Pomona reached a peak population of 5,434 before its closing on August 24, 1942. Most internees there were transferred to Heart Mountain in Wyoming. The site remained in use for the duration of the war, first housing U.S. troops, and then German and Italian prisoners of war. Today, the site serves as the Fairplex parking lot.

The Fairplex has been the center of controversy lasting over 50 years, only brought up among local residents and employees of the Los Angeles Fair Association, who, as of the year 2015, have lost their non-profit licence. The controversy surrounding The Los Angeles Fair Association are many issues including but not limited to embezzlement, theft, illegal taxing, and bribery of a government official. [I went on-line and found no reference to the previous accusations of losing the non-profit license, embezzlement, theft and bribery.]

Template:More citations ineeded From 2015 through 2017, the Fairplex became the subject of news and investigation by the Los Angeles Times for the improper collection of taxes from Fairplex RV Park residents, as well as its neglect of the RV park grounds, which resulted in issues with bed bugs and roaches as well as infrastructure problems that include damaged roads and walkways, bathrooms in disrepair, inadequate plumbing and electrical fixtures. In 2017, in a separate article written by the Los Angeles Times, the Los Angeles Fair Association agreed to a $325,000 settlement with the residents of the Fairplex RV Park. The settlement agreement allowed at least 475 people to be reimbursed for improper collection of taxes. Unfortunately, due to civil suit limitations and the abilities of the residents' legal counsel, residents were only able to file for reimbursement as far back as four years prior to the 2015 lawsuit, leaving some residents unable to file for reimbursement any earlier than that date. Within the aforementioned article, it has also been reported that the Association has spent $250,000 on renovations of public bathrooms and showers, and calls for more transparency of the Los Angeles Fair Association by the public and the City of Pomona.[9]

Retrieved from "https://en.wikipedia.org/w/index.php?title=Fairplex&oldid=925916562"
Categories:
Hidden categories:
The article is a derivative under the Creative Commons Attribution-ShareAlike License. A link to the original article can be found here and attribution parties here. By using this site, you agree to the Terms of Use. Gpedia Ⓡ is a registered trademark of the Cyberajah Pty Ltd.