Fairview is a secret program under which the National Security Agency cooperates with the American telecommunications company AT&T in order to collect phone, internet and e-mail data mainly of foreign countries' citizens at major cable landing stations and switching stations inside the United States. The FAIRVIEW program started in 1985, one year after the Bell breakup.[1]

The "key corporate partner" for cooperation under the FAIRVIEW program was first identified on October 23, 2013 by The Washington Post—quoting NSA historian Matthew Aid—as AT&T.[2]

This was confirmed by a joint report by Pro Publica and The New York Times from August 15, 2015, based upon NSA documents that describe the company as "highly collaborative" and praise the company's "extreme willingness to help".[1]

In 2011, the FAIRVIEW program cost the NSA $188.9 million, which was twice as much as the costs for STORMBREW, which is the second-largest program.[1]

Scope of the program

According to 2013 revelations by whistleblower Edward Snowden:

According to the revelations, the NSA had collected 2.3 billion separate pieces of data from Brazilian users in January 2013 alone.[4]

Several weeks earlier, Snowden had revealed that the NSA was also harvesting the telephone metadata and text messages from over a billion subscribers in China; however, no precise program name was reported at the time.[5] 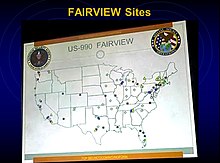 A slide about the FAIRVIEW program that was seen on Brazilian television in 2013 showed a map with markers all over the United States, but without a legend that explained what they stood for. From a similar map with the proper legend, that was published in August 2015, it became clear that in 2010 the NSA had access to the following AT&T facilities:[6]

Except for the VoIP facilities, most of these access points are situated along the US borders.

The collection of data under the FAIRVIEW program takes place under different legal authorities: FISA, which requires individualized warrants from the FISA Court, section 702 FAA for when one end of the communications is foreign, and the Transit Authority for when both ends of a communications are foreign.

Under the FAIRVIEW program, AT&T also provided the NSA with domestic telephone metadata in bulk, which was authorized under section 215 of the USA PATRIOT Act. First this was from landline connections, but in 2011, AT&T also started handing over cell phone metadata: 1.1 billion a day.[1]

Retrieved from "https://en.wikipedia.org/w/index.php?title=Fairview_(surveillance_program)&oldid=933613171"
Categories:
Hidden categories:
The article is a derivative under the Creative Commons Attribution-ShareAlike License. A link to the original article can be found here and attribution parties here. By using this site, you agree to the Terms of Use. Gpedia Ⓡ is a registered trademark of the Cyberajah Pty Ltd.