Fanfare for the Common Man

Fanfare for the Common Man is a musical work by the American composer Aaron Copland. It was written in 1942 for the Cincinnati Symphony Orchestra under conductor Eugene Goossens and was inspired in part by a speech made earlier that year by then American Vice President Henry A. Wallace, in which Wallace proclaimed the dawning of the "Century of the Common Man".

Several alternative versions have been made and fragments of the work have appeared in many subsequent US and British cultural productions, such as in the musical scores of movies. 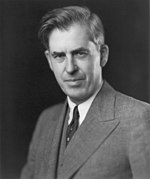 Copland, in his autobiography, wrote of the request: "Eugene Goossens, conductor of the Cincinnati Symphony Orchestra, had written to me at the end of August about an idea he wanted to put into action for the 1942–43 concert season. During World War I he had asked British composers for a fanfare to begin each orchestral concert. It had been so successful that he thought to repeat the procedure in World War II with American composers". A total of 18 fanfares[1] were written at Goossens' behest, but Copland's is the only one which remains in the standard repertoire.

It was written in response to the US entry into World War II and was inspired in part by a famous 1942 speech[2] where vice president Henry A. Wallace proclaimed the dawning of the "Century of the Common Man".[3]

Goossens had suggested titles such as Fanfare for Soldiers, or sailors or airmen, and he wrote that "[i]t is my idea to make these fanfares stirring and significant contributions to the war effort...." Copland considered several titles including Fanfare for a Solemn Ceremony and Fanfare for Four Freedoms; to Goossens' surprise, however, Copland titled the piece Fanfare for the Common Man. Goossens wrote, "Its title is as original as its music, and I think it is so telling that it deserves a special occasion for its performance. If it is agreeable to you, we will premiere it 12 March 1943 at income tax time". Copland's reply was "I [am] all for honoring the common man at income tax time".[4]

Copland later used the fanfare as the main theme of the fourth movement of his Third Symphony (composed between 1944 and 1946).

On television and other media

The fanfare has found much use as a theme for television programs. In the United States, it was used on the television program You Are There in its later years during the show's closing credits. Emerson, Lake and Palmer's arrangement of "Fanfare for the Common Man" was the opening theme song for the CBS Sports Spectacular and in Mexico, it was the main title theme of TV Azteca TV sport program DeporTV. In Scotland, the BBC used it as the theme to their main news program Reporting Scotland in the late 1970s and early 1980s. An early 1980s Canadian television series called Titans used "Fanfare" as its opening theme music.

In Australia, the Seven Network used Emerson, Lake & Palmer's version in the 1980s and early 1990s as the theme music for Seven Sport broadcasts, and continued to use a teaser version up until 2011. In the early 1980s when Channel 0/28 (now SBS One) would begin transmission for the night, they would use the Aaron Copland version as their opening theme. It was also used as the opening theme for the network's very first night of transmission.

In the 1980s and early 1990s, Channel 3, the English language television channel operated by oil company Saudi Aramco in Dhahran, Saudi Arabia, used the fanfare as their opening and closing theme. The channel broadcast American and British television shows and films. Parts of the fanfare and its entirety was utilized in the United States American Broadcasting Systems (ABC) movie The Day After shown in 1983. The film focused on the possibility of a nuclear war on the middle of American in Lawrence, KS.

During the 1980s, the Nine Network televised a lifestyle program call World of Boats (later to be broadened and called World of Leisure) hosted by Chris Conroy which used the Emerson, Lake and Palmer version as the theme for the program.

At the 1988 University of Washington Computer Fair, Steve Jobs demoed the NeXT computer. The system used a recording of the music to show off the multi-media capabilities of the machine.[citation needed]

In the mid-1990s, the piece was used as background music in United States Navy recruitment advertisements.

The Chicago Blackhawks of the NHL have used it as part of a pre-game video introduction of the team before it takes to the ice since moving into the United Center in 1994.[5]

This piece was used as the postlude at the funeral for Ronald Brown, Bill Clinton's Commerce Secretary, on April 10, 1996, at the National Cathedral.

Several feature films employ the piece for dramatic effect. John Williams' main themes for the 1978 Superman film are partially based on the fanfare and his original score for Saving Private Ryan draws heavily on its soundworld (though Copland's piece is not actually heard in either movie). In The Patriot, which Williams scored, the music of the final scene before the credits may be a nod to Copland's work. The fanfare functioned as Jimmy King's theme in Ready to Rumble. The Bollywood film Parinda prominently features the piece as background score, including in a haunting opening depicting shots of Bombay.[6]

On October 9, 2004, it was played as Queen Elizabeth II and her procession entered the debating chamber during the opening ceremony of the new Scottish Parliament building in Edinburgh.

The first three notes of the piece are coincidentally the same as the sound made by the motors and door chimes of the MR-73 class of cars on the Montreal Metro as they leave the station and accelerate.[7] "Fanfare for the Common Man" was one of the musical themes for Expo 67, which was held in Montreal.

On September 21, 2012, "Fanfare" was played at Los Angeles International Airport as the Space Shuttle Endeavour touched down after its final flight.[8]

In 2012, “Fanfare for the Common Man” was used as the opener for the Carolina Crown Drum and Bugle Corps 2012 program “For the Common Good”. The show placed in Finals, and that next year, Crown won their first ever Drum Corps International World Class Championship title.[citation needed]

It featured in BBC Television's children's television programme, Melody, as the second piece to inspire Melody's imagination. She imagined a family of elephants enjoying a mud bath.[9]

On September 26, 2015, it was played at Independence Hall in Philadelphia as Pope Francis came outside to make a speech on religious freedom, which he delivered from the lectern used by Abraham Lincoln to deliver the Gettysburg Address.[11]

On October 4, 2016 it was played at the memorial service for golfer Arnold Palmer as the United States Coast Guard Honor Guard exited the service after placing the flags.

On October 31, 2019 it was played on the roof of Radio24syv's headquarters in Copenhagen, Denmark, at midnight, when the station stopped broadcasting.[12] The station was closed after 8 years, because it controversially failed to get its broadcast license and funding renewed, after a long and windy political process.[13]

On December 31, 2001 The ELP version of "Fanfare For the Common Man" was played in Times Square. A memorial to the victims of September 11, 2001. The names of those who lost their lives scrolled as the composition played.

Copland's fanfare was used in 1977 by British prog-rock band Emerson, Lake & Palmer on the album Works Volume 1. The track became one of the band's biggest hits when an edited version was released as a single that year. It peaked at No. 2 in the UK. Keith Emerson had long been an admirer of Copland's Americana style, previously using Copland's Hoedown on the band's Trilogy album in 1972.[14] This version was played to start the medal ceremonies of the 2012 Olympic Games in London, as well as being used by English Football League Championship side, Aston Villa Football Club

An excerpt of Fanfare for the Common Man was used to open the Rolling Stones Tour of the Americas '75, and their Tour of Europe '76 supporting their Black and Blue album. The excerpt was also included and credited as such on the band's 1977 Love You Live live album.

Additionally, the rock band Asia (which shares the drummer Carl Palmer from Emerson, Lake & Palmer) often plays a variation of "Fanfare" during their live shows. Different versions have appeared on various live Asia albums over the years as well.

The Woody Herman Orchestra was known for closing their performances with a jazz rendition of Fanfare for the Common Man. It appears on the 1976 CD Woody Herman • Featuring Stan Getz.

Bob Dylan has opened his shows with "Fanfare for the Common Man".[citation needed]

Mannheim Steamroller also has a version on its "American Spirit" album. On August 28, 2010, it was played at the beginning of Glenn Beck's Restoring Honor rally.[15]

On January 12, 2011, the piece opened "Together We Thrive: Tucson and America", the memorial service for the victims of the 2011 Tucson shooting following the attempted assassination of Gabrielle Giffords and the murder of six others.[16]

On July 19, 2011, it was played as the wake-up music for the shuttle crew of STS-135, the final mission for the Space Shuttle Atlantis and the final overall shuttle mission.

Formula 1 Theme on Rede Globo Brazilian television network in years 70/80 in the version of ELP.

English Premier League side, Wolverhampton Wanderers play the introduction to the fanfare before all home matches, followed by Jeff Beck's version of "Hi Ho Silver Lining".

During the 90/91 and 91/92 football season in England, the then first division club Leeds United would enter the pitch to the fanfare, followed by the opening of "Eye of the Tiger" by Survivor.

English League One side Shrewsbury Town FC used to incorporate the song into title music for their VHS video productions of matches during the early 1990s. This was done by the now defunct 'Resolution Video' working on the club's behalf.

In the 1990s, "Fanfare" began to be used to welcome the winner of the Aintree Grand National Steeplechase from the racecourse to the winner's enclosure as the timing of the piece roughly matched the time it took the winner to make the journey. When the enclosure was moved in 2010, "Fanfare" was used instead to announce the procession of competitors from the paddock to the course before the race.[17]

The British band Enter Shikari included a song titled "Fanfare for the Conscious Man" on their album Common Dreads. The song is a criticism of British involvement in the Iraq War.

A version was used in the soundtrack for the 2010 released indie game Revenge of the Titans.

Retrieved from "https://en.wikipedia.org/w/index.php?title=Fanfare_for_the_Common_Man&oldid=971380011"
Categories:
Hidden categories:
The article is a derivative under the Creative Commons Attribution-ShareAlike License. A link to the original article can be found here and attribution parties here. By using this site, you agree to the Terms of Use. Gpedia Ⓡ is a registered trademark of the Cyberajah Pty Ltd.