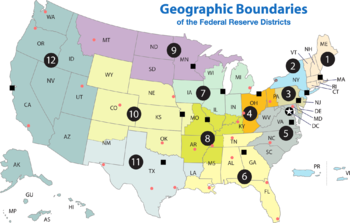 Some banks also possess branches, with the whole system being headquartered at the Eccles Building in Washington, D.C. 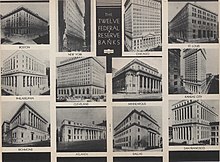 The twelve Reserve Banks buildings in 1936
Main article: History of central banking in the United States

The Federal Reserve Banks are the most recent institutions that the United States government has created to provide functions of a central bank. Prior institutions have included the First (1791–1811) and Second (1818–1824) Banks of the United States, the Independent Treasury (1846–1920) and the National Banking System (1863–1935). Several policy questions have arisen with these institutions, including the degree of influence by private interests, the balancing of regional economic concerns, the prevention of financial panics, and the type of reserves used to back currency.[2]

A financial crisis known as the Panic of 1907 threatened several New York banks with failure, an outcome avoided through loans arranged by banker J. P. Morgan. Morgan succeeded in restoring confidence to the New York banking community, but the panic revealed weaknesses in the U.S. financial system, such that a private banker could dictate the terms of a bank's survival.[3] In other parts of the country, clearing houses briefly issued their own money notes to carry on business. In response, the federal government created the National Monetary Commission to investigate options for providing currency and credit in future panics. The result was the Federal Reserve System, which established several Federal Reserve Banks to provide liquidity to banks in different regions of the country.[2] The Federal Reserve Banks opened for business in November 1914.[4]

The twelve regional Federal Reserve Banks were established as the operating arms of the nation's central banking system. They are organized as self-financing corporations and empowered by Congress to distribute currency and regulate its value under policies set by the Federal Open Market Committee and the Board of Governors. Banks gain access to the Federal Reserve system's services by becoming a member of a regional Reserve Bank and purchasing stock in it. The stock pays a dividend out of the Reserve Bank's earnings but grants no proportional voting power or ownership beyond the amount paid in, and it may not be sold or borrowed against.[5] Each Reserve Bank has a nine-member board of directors, of whom six are chosen by member banks and three by the Board of Governors subject to qualifications defined in the Federal Reserve Act. If a Reserve Bank were ever dissolved or liquidated, the Act states that its surplus assets (after payment of debts and return of capital stock) would belong to the federal government.[6]

Regarding the structural relationship between the twelve Federal Reserve banks and the various commercial (member) banks, political science professor Michael D. Reagan has written that:[10]

... the "ownership" of the Reserve Banks by the commercial banks is symbolic; they do not exercise the proprietary control associated with the concept of ownership nor share, beyond the statutory dividend, in Reserve Bank "profits." ... Bank ownership and election at the base are therefore devoid of substantive significance, despite the superficial appearance of private bank control that the formal arrangement creates.

The Federal Reserve Banks offer various services to the federal government and the private sector:[11][12]

Historically the Reserve Banks compensated member banks for keeping reserves on deposit (and therefore unavailable for lending) by paying them a dividend from earnings, limited by law to 6 percent. The Emergency Economic Stabilization Act (EESA) of 2008 additionally authorized the Reserve Banks to pay interest on member bank reserves, while the FAST Act of 2015 imposed an additional dividend limit equal to the yield determined in the most recent 10-year Treasury Note auction.

Although all Reserve Banks have the legal authority to conduct open-market operations and federal debt auctions, in practice only the Reserve Bank of New York does so. It manages the System Open Market Account (SOMA), a portfolio of government-issued or government-guaranteed securities that is shared among all of the Reserve Banks.[13]

Each Federal Reserve Bank funds its own operations, primarily from interest on its loans and on the securities it holds. Expenses and dividends paid are typically a small fraction of a Federal Reserve Bank's revenue each year.[14] The banks may retain part of their earnings in their own surplus funds that are limited to $7.5 billion, system-wide. The rest must be transferred via the Board of Governors to the Secretary of the Treasury, who then deposits it to the Treasury's general fund.[15][16]

The Federal Reserve Banks conduct ongoing internal audits of their operations to ensure that their accounts are accurate and comply with the Federal Reserve System's accounting principles. The banks are also subject to two types of external auditing. Since 1978 the Government Accountability Office (GAO) has conducted regular audits of the banks' operations. The GAO audits are reported to the public, but they may not review a bank's monetary policy decisions or disclose them to the public.[17] Since 1999 each bank has also been required to submit to an annual audit by an external accounting firm,[18] which produces a confidential report to the bank and a summary statement for the bank's annual report. Some members of Congress continue to advocate a more public and intrusive GAO audit of the Federal Reserve System,[19] but Federal Reserve representatives support the existing restrictions to prevent political influence over long-range economic decisions.[20][21] 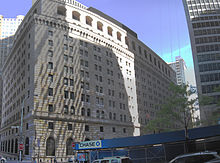 The Federal Reserve Bank of New York has over $1.8 trillion in assets.

The New York Federal Reserve district is the largest by asset value. San Francisco, followed by Kansas City and Minneapolis, represent the largest geographical districts. Missouri is the only state to have two Federal Reserve Banks (Kansas City and St. Louis). California, Florida, Missouri, Ohio, Pennsylvania, Tennessee, and Texas are the only states which have two or more Federal Reserve Bank branches seated within their states, with Missouri, Pennsylvania, and Tennessee having branches of two different districts within the same state. In the 12th District, the Seattle Branch serves Alaska, and the San Francisco Bank serves Hawaii. New York, Richmond, and San Francisco are the only banks that oversee non-U.S. state territories. The System serves these territories as follows: the New York Bank serves the Commonwealth of Puerto Rico and the U.S. Virgin Islands; the Richmond Bank serves the District of Columbia; the San Francisco Bank serves American Samoa, Guam, and the Commonwealth of the Northern Mariana Islands. The Board of Governors last revised the branch boundaries of the System in February 1996.[22]

Retrieved from "https://en.wikipedia.org/w/index.php?title=Federal_Reserve_Bank&oldid=925876755"
Categories:
Hidden categories:
The article is a derivative under the Creative Commons Attribution-ShareAlike License. A link to the original article can be found here and attribution parties here. By using this site, you agree to the Terms of Use. Gpedia Ⓡ is a registered trademark of the Cyberajah Pty Ltd.