Ferst Center for the Arts 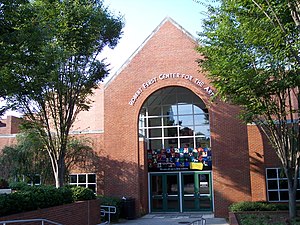 The Robert Ferst Center for the Arts, located in Atlanta, Georgia, is Georgia Tech's theater and arts center and is adjacent to DramaTech, the student-run theater. It contains a 969-seat auditorium that features a proscenium stage, orchestra pit, and theatrical lighting and sound systems.[1]

The center opened in April 1992 with the name Georgia Tech Theatre for the Arts.[2] It was renamed in honor of Robert H. Ferst, a Georgia Tech alumnus, following a $1 million donation by his widow, Jeanne Rolfe Ferst.[3]

On October 13, 1992, shortly after its opening, it served as the venue for the Vice Presidential debate between Al Gore, Dan Quayle, and James Stockdale.[4]

Retrieved from "https://en.wikipedia.org/w/index.php?title=Ferst_Center_for_the_Arts&oldid=933092354"
Categories:
Hidden categories:
The article is a derivative under the Creative Commons Attribution-ShareAlike License. A link to the original article can be found here and attribution parties here. By using this site, you agree to the Terms of Use. Gpedia Ⓡ is a registered trademark of the Cyberajah Pty Ltd.