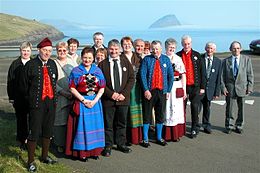 Faroese folk dance club with some members in national costumes.

A folk costume (also regional costume, national costume, or traditional garment) expresses an identity through costume, which is usually associated with a geographic area or a period of time in history. It can also indicate social, marital or religious status. If the costume is used to represent the culture or identity of a specific ethnic group, it is usually known as ethnic costume (also ethnic dress, ethnic wear, ethnic clothing, traditional ethnic wear or traditional ethnic garment). Such costumes often come in two forms: one for everyday occasions, the other for traditional festivals and formal wear.

Following the outbreak of romantic nationalism, the peasantry of Europe came to serve as models for all that appeared genuine and desirable. Their dress crystallised into so-called "typical" forms, and enthusiasts adopted that attire as part of their symbolism.

In areas where Western dress codes have become usual, traditional garments are often worn at special events or celebrations; particularly those connected with cultural traditions, heritage or pride. International events may cater for non-Western attendees with a compound dress code such as "business suit or national dress".

In modern times, there are instances where traditional garments are required by sumptuary laws. In Bhutan, the traditional Tibetan-style clothing of gho and kera for men, and kira and toego for women, must be worn by all citizens, including those not of Tibetan heritage. In Saudi Arabia, women are also required to wear the abaya in public. 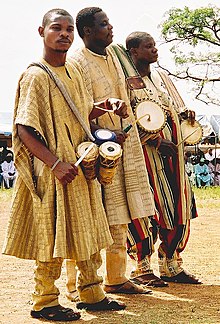 Northern Caucasus folk costumes. The text at the bottom of the picture reads (from left to right): Ossetians, Circassians, Kabardians, and Chechens. 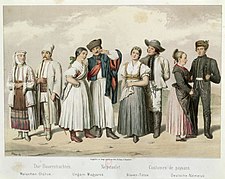 Costumes of inhabitants of the Kingdom of Hungary in 1855: Romanian, ethnic Hungarian (Magyar), Slovak and German peasants 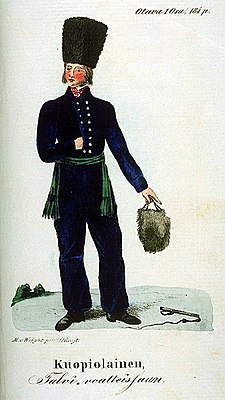 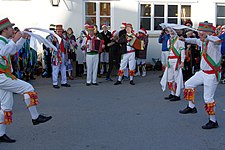 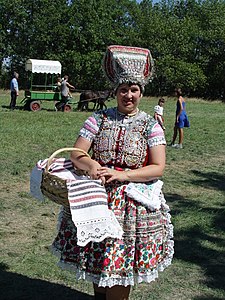 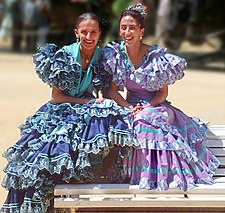 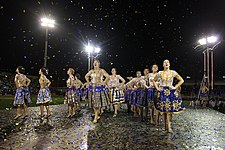 US senators wearing seersucker suits associated with the Southern US

China Poblana dress, emblematic of the City of Puebla and sometimes considered the national costume of Mexico. 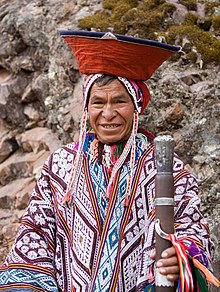 Retrieved from "https://en.wikipedia.org/w/index.php?title=Folk_costume&oldid=971252733"
Categories:
Hidden categories:
The article is a derivative under the Creative Commons Attribution-ShareAlike License. A link to the original article can be found here and attribution parties here. By using this site, you agree to the Terms of Use. Gpedia Ⓡ is a registered trademark of the Cyberajah Pty Ltd.