Foods of the American Civil War 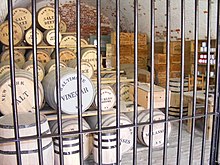 According to Hardee's Rifle and Light Infantry Tactics,[1] written by a U.S. Army officer from the South before the war, the rations for a soldier during this time usually included:

This would be supplemented by (per 100 rations):

The most common field rations issued to individual soldiers were salt pork and hardtack, both of which were designed to withstand field conditions without deteriorating. Excess salt could be scraped off the meat to supplement the salt ration. However, these rations required cooking to make them palatable. Less experienced soldiers were unlikely to have their own cooking equipment, and the large company-level kettles were sometimes left behind during rapid advances.

Food often became infested with insects, especially rice or grain weevils. This, along with scarcity and inedible rations, made it necessary for soldiers to supplement their diets on their own. Soldiers could obtain a greater variety of foods by foraging and/or raiding; receiving food boxes from their families; or purchasing/trading items with other soldiers. Soldiers could not count on obtaining food from the inhabitants of areas where they encamped since most citizens were also affected by the war and had little to give. If inhabitants supported the soldiers' side in the war, sometimes they might manage to provide food, but it was usually acquired by theft.

Gail Borden's invention of condensed milk was very helpful in for the Union army.[3] Soldiers would also regularly drink coffee, however it was not always entirely coffee beans. Dandelion root served as a supplement or Ersatz good when coffee beans were scarce. Dandelion root was widely available and caffeine-free, tasting about the same as coffee.

The rations for soldiers in the Confederate States of America army were supposed to follow the guidelines in Hardee's book. Hardee himself would serve in the Confederate Army as a corps commander in the western theater. Although Northern quartermasters took the ration guidelines as their standard, the South's army found itself lacking most of the items listed. The Confederate government attempted to provide adequate rations for their troops but were hampered by blockades, monoculture farming, and lack of transportation. They were served cornbread.

Confederate soldiers, on the other hand, had more access to tobacco than their Union counterparts. While opposing troops were on picket duty, it was common for Union soldiers to trade their coffee with the Confederate soldiers in exchange for tobacco (away from the eyes of officers). Southern soldiers could also use roasted chicory root as a coffee substitute. The peanut, due to its wide availability throughout southern North America, was also an important source of food for Confederate soldiers.

The Civil War required complex logistics in order to feed the massive numbers of soldiers in the Union and Confederate armies. The task could fall to the respective national governments or on the individual states that recruited, raised, and equipped the regiments and batteries.

Both armies had their own commissary departments designed to organize the feeding of soldiers during the war. They oversaw the procurement, logistics, and the distribution of millions of pounds of food supplies, often shipped and stored in wooden barrels. Salted meats, coffee beans, dried peas or dried beans, sugar and hardtack, a stale biscuit (that would have to be softened in a liquid such as coffee), were all commonly distributed by these departments.

Often, while on field campaigns, soldiers found themselves saving some portions of food in their haversacks, washable canvas bags that provided storage but did little for food preservation. The soldiers' diets often sometimes included salted pork, salted beef, salt, vinegar, and dried fruits and vegetables. Rarely, the soldiers could obtain fresh items such as carrots, onions, turnips, potatoes, and fresh fruit. The Union army soldiers were often given food items such as bacon, cornmeal, tea, sugar, molasses, and fresh vegetables.

Another common dish was Skillygalee, hardtack soaked in water and fried in fat. The Confederate army would fry bacon and add in some water with cornmeal to make "coosh" often prepared when the army would have little time to make meals during marches.

Beyond the battlefield, the scarcity of food was felt far more sharply in the South, a result of the success of Union blockades. Northern cookbooks of the period barely make mention of the war. In the few southern cookbooks published during and shortly after, the fact of shortages is inescapable.[4]

Retrieved from "https://en.wikipedia.org/w/index.php?title=Foods_of_the_American_Civil_War&oldid=957901012"
Categories:
Hidden categories:
The article is a derivative under the Creative Commons Attribution-ShareAlike License. A link to the original article can be found here and attribution parties here. By using this site, you agree to the Terms of Use. Gpedia Ⓡ is a registered trademark of the Cyberajah Pty Ltd.