Jump to navigation Jump to search
This article is about the explorer. For the accordionist, see Francisco Ulloa (accordionist). 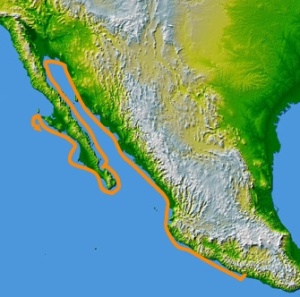 Francisco de Ulloa (pronounced [fɾanˈθisko de uˈʎoa]) (died 1540) was a Spanish explorer who explored the west coast of present-day Mexico under the commission of Hernán Cortés. The reports of his expeditions along the Baja California Peninsula are credited with being influential in the perpetuation of the 17th century cartographic misconception of the existence of the Island of California.

It is not known whether Ulloa accompanied Cortés on his first expedition to the New Spain. By the account of Bernal Díaz del Castillo, he came to Mexico later while transporting letters to Cortés from his wife. According to some early historians, Ulloa was influential in helping subdue the Aztec capital Tenochtitlan by naval power.

In 1539, at the private expense of Cortés, he embarked on an expedition in three small vessels, sailing north from Acapulco to explore the Pacific Coast, and to seek the mythical Strait of Anián that supposedly led to the Gulf of St. Lawrence, proving the existence of the Northwest Passage. The expedition left on July 8 sailing northwards along the coast and reaching the Gulf of California six weeks later. Ulloa named it the "Sea of Cortés" in honor of his patron. When one of his ships was lost in a storm Ulloa paused to repair the other two ships, and then resumed his voyage on September 12, eventually reaching the head of the Gulf.

Unable to find the Strait of Anián, Ulloa turned south and sailed along the eastern coast of the Baja California Peninsula, landing at the Bay of La Paz. After taking on supplies of wood and water Ulloa rounded the tip of the peninsula with great difficulty and sailed northward along the western shore in the Pacific Ocean.

The progress of his small ships was hampered by the fierce winds and high seas he encountered, eventually forcing him to turn back to New Spain. The voyage eventually reached 28 degrees north near the Isla de Cedros.

Although his discoveries showed that Baja California is a peninsula, legends and maps depicting California as an island persisted intermittently into the 18th century. According to Díaz del Castillo, Ulloa was stabbed to death in 1540. By other accounts, his ship was lost without a trace during the return voyage from Baja California. Supposedly his ship was swept inland with a tsunami, later becoming known as the Lost Ship of the Desert.[1]

Retrieved from "https://en.wikipedia.org/w/index.php?title=Francisco_de_Ulloa&oldid=930219035"
Categories:
Hidden categories:
The article is a derivative under the Creative Commons Attribution-ShareAlike License. A link to the original article can be found here and attribution parties here. By using this site, you agree to the Terms of Use. Gpedia Ⓡ is a registered trademark of the Cyberajah Pty Ltd.