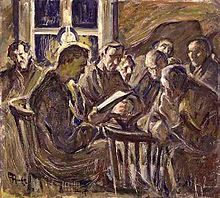 "Sammankomsten" ("The Meeting"), oil painting by Ester Almqvist, original at the Swedish National Museum. The painting was chosen by the UN as a motif for a stamp commemorating the establishment of the Universal Declaration of Human Rights, paragraph 20: the Right of Assembly

Janitorial workers striking in front of the MTV building in Santa Monica, California. Although striking in a trade union is a way of exercising freedom of assembly and freedom of association, other aspects of the conduct of the workers depicted here, such as pedestrian blocking of vehicle traffic in whichever direction has the right of way at this signal-controlled intersection, may violate local or state laws such as California Vehicle Code § 21950(b).[1]

Posted excerpt from the US Constitution, at an Occupy Oakland event, 2011

Freedom of peaceful assembly, sometimes used interchangeably with the freedom of association, is the individual right or ability of people to come together and collectively express, promote, pursue, and defend their collective or shared ideas.[2] The right to freedom of association is recognized as a human right, a political right and a civil liberty.

In American history, freedom of assembly has protected individuals espousing variety of different viewpoints. Striking workers, civil rights advocates, anti-war demonstrators and Ku Klux Klan marchers have all taken to the streets and sidewalks in protest or in support of their causes. Sometimes these efforts have galvanized public support or changed public perceptions. Imagine a civil rights movement without the March on Washington or the women's suffrage movement without the ranks of long-skirted, placard-carrying suffragists filling city streets.[4]

Freedom of assembly is included in, among others, the following human rights instruments:

National and regional constitutions that recognize freedom of assembly include:

Retrieved from "https://en.wikipedia.org/w/index.php?title=Freedom_of_assembly&oldid=970198848"
Categories:
Hidden categories:
The article is a derivative under the Creative Commons Attribution-ShareAlike License. A link to the original article can be found here and attribution parties here. By using this site, you agree to the Terms of Use. Gpedia Ⓡ is a registered trademark of the Cyberajah Pty Ltd.