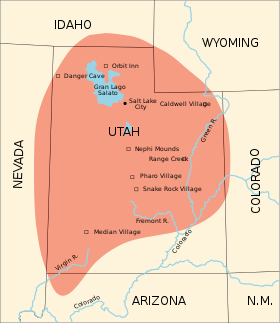 The Fremont culture or Fremont people is a pre-Columbian archaeological culture which received its name from the Fremont River in the U.S. state of Utah, where the culture's sites were discovered by local indigenous peoples like the Navajo and Ute. In Navajo culture, the pictographs are credited to people who lived before the flood. The Fremont River itself is named for John Charles Frémont, an American explorer. It inhabited sites in what is now Utah and parts of Nevada, Idaho and Colorado from AD 1 to 1301 (2,000-700 years ago[1]). It was adjacent to, roughly contemporaneous with, but distinctly different from the Ancestral Pueblo peoples located to their south. 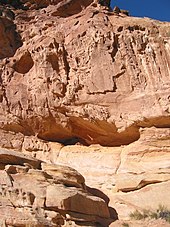 Typical "Moki Hut" placement in the crevice of the cliff 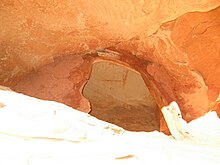 Scholars do not agree that the Fremont culture represents a single, cohesive group with a common language, ancestry, or way of life, but several aspects of their material culture provides evidence for this concept. First, Fremont culture people foraged wild food sources and grew corn. The culture participated in a continuum of fairly reliable subsistence strategies that no doubt varied from place to place and time to time. This shows up in the archaeological record at most village sites and long term camps as a collection of butchered, cooked and then discarded bone from mostly deer and rabbits, charred corn cobs with the kernels removed, and wild edible plant remains. Other unifying characteristics include the manufacture of relatively expedient gray ware pottery and a signature style of basketry and rock art. Most of the Fremont lived in small single and extended family units comprising villages ranging from two to a dozen pithouse structures, with only a few having been occupied at any one time. Still, exceptions to this rule exist (partly why the Fremont have earned a reputation for being so hard to define), including an unusually large village in the Parowan Valley of southwestern Utah, the large and extensively excavated village of Five Finger Ridge at the above mentioned Fremont Indian State Park, and others, all appearing to be anomalous in that they were either occupied for a long period of time, were simultaneously occupied by a large number of people, 60 or more at any given moment, or both. The Fremont are sometimes thought to have begun as a splinter group of the Ancestral Pueblo people, although archaeologists do not agree on this theory.

According to archaeologist Dean Snow,

Fremont people generally wore moccasins like their Great Basin ancestors rather than sandals like the Ancestral Puebloans. They were part-time farmers who lived in scattered semi-sedentary farmsteads and small villages, never entirely giving up traditional hunting and gathering for more risky full-time farming. They made pottery, built houses and food storage facilities, and raised corn, but overall they must have looked like poor cousins to the major traditions of the Greater Southwest, while at the same time seeming like aspiring copy-cats to the hunter-gatherers still living around them.[3]

Snow notes that Fremont culture declined due to changing climate conditions c. 950 CE. The culture moved to the then-marshy areas of northwestern Utah, which sustained them for about 400 years.[4]

The Range Creek Canyon site complex is unambiguously identified with the Fremont culture, and because of its astonishingly pristine state, brought an immense amount of archaeological insight to this hitherto obscure culture.

First explored in 2004, the Range Creek property was a major find:[5]

Pit houses dug halfway in the ground, their roofs caved in, dotted the valley floor and surrounding hills. Arrowheads, beads, ceramic shards and stone-tool remnants were strewn all over. Human bones poked out of rock overhangs, and hundreds of bizarre human figures with tapered limbs and odd projections emanating from their heads were chiseled on the cliff walls ... the pit houses were intact ... and granaries were stuffed with corncobs a thousand years old.

Research completed in 2006 indicated that the land included 1,000-year-old hamlets of the Fremont people "highly mobile hunters and farmers who lived mostly in Utah from around A.D. 200 to 1300 before disappearing..."[6]

According to Snow, the Fremont's eventual fate is unknown, but it is possible that they moved into Idaho, Nebraska and Kansas, and may have become part of the Dismal River culture to the east or the Ancestral Pueblo communities to the south or absorbed by the arriving Numic-speaking peoples.[7]

Retrieved from "https://en.wikipedia.org/w/index.php?title=Fremont_culture&oldid=965035155"
Categories:
Hidden categories:
The article is a derivative under the Creative Commons Attribution-ShareAlike License. A link to the original article can be found here and attribution parties here. By using this site, you agree to the Terms of Use. Gpedia Ⓡ is a registered trademark of the Cyberajah Pty Ltd.