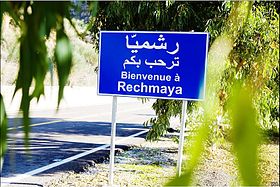 Town sign in Standard Arabic and French at the entrance of Rechmaya, Lebanon.

French language in Lebanon is the second language of the country.[1] A law determines the cases in which the French language is to be used within government,[2] and is often used as a prestige language for business, diplomacy and education.

The use of the French language is a legacy of the time of the French Crusades[3] and France's colonialism in the region, including its League of Nations mandate over Lebanon following World War I; as of 2004, some 20% of the population used French on a daily basis.[4]

Formerly under French mandate, independent Republic of Lebanon designates Arabic as the sole official language, while a special law regulates cases when French can be publicly used.

Article 11 of Lebanon's Constitution states that

"Arabic is the official national language. A law determines the cases in which the French language is to be used".[2]

The majority of Lebanese people speak Lebanese Arabic, which is grouped in a larger category called Levantine Arabic, while Modern Standard Arabic is mostly used in magazines, newspapers, and formal broadcast media. Code-switching between Arabic and French is very common.[5][6][7]

French language inscription "Banque du Liban" on the headquarters of the Bank of Lebanon.

French and English are secondary languages of Lebanon, with about 45% of the population being Francophone as a second language and 30% Anglophone.[11] The use of English is growing in the business and media environment. Out of about 900,000 students, about 500,000 are enrolled in Francophone schools, public or private, in which the teaching of mathematics and scientific subjects is provided in French.[12] Actual usage of French varies depending on the region and social status. One third of high school students educated in French go on to pursue higher education in English-speaking institutions. English is the language of business and communication, with French being an element of social distinction, chosen for its emotional value.[13]

Retrieved from "https://en.wikipedia.org/w/index.php?title=French_language_in_Lebanon&oldid=956441680"
Categories:
Hidden categories:
The article is a derivative under the Creative Commons Attribution-ShareAlike License. A link to the original article can be found here and attribution parties here. By using this site, you agree to the Terms of Use. Gpedia Ⓡ is a registered trademark of the Cyberajah Pty Ltd.