The second period of French rule in the Ionian Islands (Greek: Δεύτερη Γαλλοκρατία των Επτανήσων, romanized: Dėfteri Gallokratía ton Eptaníson) began in August 1807, when the Septinsular Republic, a Russian protectorate comprising the seven Ionian Islands, was occupied by the First French Empire in accordance with the Treaty of Tilsit. The French annexed the Republic but maintained most of its institutions for local governance. In 1809–10, the British occupied the southernmost islands, leaving only Corfu, Paxoi, and the mainland exclave of Parga in French hands. The British also imposed a naval blockade on the French-ruled islands, which began to suffer from famine. Finally, the British occupied Paxoi in late 1813 and Parga in March 1814. Following the Abdication of Napoleon, the French governor-general in Corfu, François-Xavier Donzelot, capitulated and the French garrison was evacuated. In 1815, the islands became a British protectorate, the United States of the Ionian Islands.

In the Treaty of Tilsit, concluded in July 1807, Russia ceded the Septinsular Republic to Napoleonic France.[1] On 20 August, French troops landed on Corfu, followed three days later by General César Berthier, who received control of the islands from the Russian admiral Dmitry Senyavin. As the Russians departed, French troops replaced them in all islands, as well as the mainland dependency of Parga. Finally, on 1 September, contrary to his instructions to preserve the Islands' constitution, Berthier as Governor-General declared the annexation of the Septinsular Republic to France.[2][3] 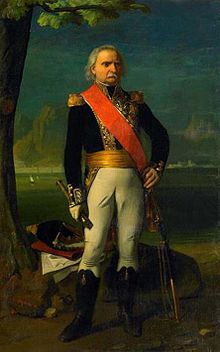 Berthier moved swiftly to abolish the Republic's attributes as an independent state: the French flag was raised, all public officials and soldiers took an oath of allegiance to Napoleon, the embassies and agencies of the Republic abroad were abolished, and all domestic bodies apart from the courts and the Ionian Senate as well.[3] These measures annoyed Napoleon, who replaced Berthier as Governor-General with François-Xavier Donzelot.[3] His chief task, according to the instructions sent by Napoleon, was to defend the islands, and above all Corfu, against the mounting British threat.[2]

In November 1807, Napoleon regulated the administration of the new French possessions: the internal structure of the Republic was retained largely along the lines of the 1803 Constitution,[4][2] including the Ionian Senate (although its members were now appointed rather than elected), but the administration was overseen by a Governor-General and an Imperial Commissioner, with Julien Bessières the first to occupy the latter post.[2]

British attacks on the Ionian Islands

The British had reacted to the French takeover of the islands by a naval blockade, which impeded both trade and the supply of the islands. The resulting hardships, and the activities of British agents, inflamed anti-French sentiments, and some Ionian captains petitioned the British commander-in-chief in the Mediterranean, John Stuart, for aid in expelling the French from the islands.[2] Indeed, in October 1809 a British expeditionary force under Brigadier John Oswald arrived at Zakynthos, and issued a proclamation promising to restore the Ionian Islands' liberty and independence. Due to the small size of the French garrisons, the British quickly occupied Zakynthos and Cephalonia (4 October), Ithaca (8 October), and Kythera (12 October), installing provisional administrations according to the existing laws.[2]

The first major military operation was against Lefkada, in April 1810, where Greek auxiliaries under Theodoros Kolokotronis and the British major Richard Church played a particularly important role. Despite strong French resistance, the garrison surrendered on 16 April.[2] On 29 May 1810, on the Paxoi islands a pro-British uprising broke out. The rebels evicted the small French garrison, raised the British flag, and attacked French sympathizers on the islands. However, British troops failed to arrive, and the French in Corfu quickly suppressed the uprising.[2] The British established a Governor-General in Zakynthos (General Oswald until 1810, General George Airey until 1813, and General Sir James Campbell after). Each island was governed by a Governor with a five-member Executive Council, and a local legislative assembly, the Administrative Body.[2] While the British-controlled islands returned to normality, the French-held islands of Corfu and Paxoi, under Donzelot and Imperial Commissioner Mathieu de Lesseps, suffered from the effects of the British blockade, which became official on 10 November 1810.[5]

The naval element was provided by the local French Adriatic Squadron (Escadron Adriatique), an ad-hoc sub-component of the French Mediterranean Fleet. This squadron was based in Naples, the capital of the client Kingdom of Naples, and maintained a forward base in Corfu. However, the Mediterranean Fleet had much trouble supplying the island, usually leaving the island only lightly guarded with a couple of corvettes and gunboats.[6]

Local ground forces were provided by a number of auxiliary units, local militia, and armed citizenry. Below is the list of units which were formed within the islands:[7][8]

End of French rule and aftermath

Finally, Paxoi were occupied by the British in early 1813, followed by Parga on 22 March 1814, after a popular uprising evicted the French. Corfu held out until the first downfall of Napoleon and the restoration of Louis XVIII: The armistice of 23 April [O.S. 11 April] 1814 obliged the French to evacuate Corfu. In June, Donzelot surrendered the island to Campbell.[17]

The Ionian Senate, declaring that the Septinsular Republic had been suspended but not abolished under the French and British occupations, tried to advocate for the independence of the Islands in the Congress of Vienna, but Campbell refused to accept this view, holding that the Republic had ceased to exist after Tilsit, and regarding the French-appointed Senate as not representative of the Ionian people.[17] In the end, the Ionian Islands were formed into a British protectorate, the "United States of the Ionian Islands",[18] which existed until the islands were united with the Kingdom of Greece in 1864.[19]