Southern fried chicken, also known simply as fried chicken, is a dish consisting of chicken pieces which have been coated in a seasoned batter and pan-fried, deep fried, or pressure fried. The breading adds a crisp coating or crust to the exterior of the chicken while retaining juices in the meat. Broiler chickens are most commonly used.

The first dish known to have been deep fried was fritters, which were popular in the European Middle Ages. However, it was the Scottish who were the first Europeans to deep fry their chicken in fat (though without seasoning). Meanwhile, a number of West African peoples had traditions of seasoned fried chicken (though battering and cooking the chicken in palm oil). Scottish frying techniques and West African seasoning techniques were combined by enslaved Africans and African-Americans in the American South.

The Roman cookbook of Apicius (4th century) has a recipe for deep-fried chicken called Pullum Frontonianum.[1]

The American English expression "fried chicken" is first recorded in the 1830s, and frequently appears in American cookbooks of the 1860s and 1870s.[2] The origin of fried chicken in the southern states of America has been traced to precedents in Scottish[3][4][5] and West African cuisine.[6][7][8][9] Scottish fried chicken was cooked in fat (though unseasoned)[3][5] while West African fried chicken was seasoned[3][4][9] (but battered[7][10] and cooked in palm oil).[6] Scottish frying techniques and African seasoning techniques were used in the American South by African slaves.[3][4][5][9] Fried chicken provided some means of independent economy for enslaved and segregated African-American women, who became noted sellers of poultry (live or cooked) as early as the 1730s.[11] Because of this and the expensive nature of the ingredients, it was, despite popular belief, a rare dish in the African-American community[6] reserved (as in Africa) for special occasions.[10][8][9] 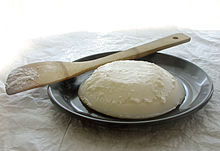 Homemade lard made from pig fat

After the development of larger and faster-growing hogs (due to crosses between European and Asian breeds) in the 18th and 19th century in the United States, backyard and small-scale hog production provided an inexpensive means of converting waste food, crop waste, and garbage into calories (in a relatively small space and in a relatively short period of time). Many of those calories came in the form of fat and rendered lard. Lard was used for almost all cooking and was a fundamental component in many common homestead foods (many that today are still regarded as holiday and comfort foods) like biscuits and pies.[12] The economic and caloric necessity of consuming lard and other saved fats may have led to the popularity of fried foods, not only in the US, but worldwide.[13] In the 19th century cast iron became widely available for use in cooking. The combination of flour, lard, a chicken and a heavy pan placed over a relatively controllable flame became the beginning of today's fried chicken.

When it was introduced to the American South, fried chicken became a common staple. Later, as the slave trade led to Africans being brought to work on southern plantations, the slaves who became cooks incorporated seasonings and spices that were absent in traditional Scottish cuisine, enriching the flavor.[14] Since most slaves were unable to raise expensive meats, but generally allowed to keep chickens, frying chicken on special occasions continued in the African American communities of the South. After the abolition of slavery, it gradually passed into common use as a general Southern dish. Since fried chicken traveled well in hot weather before refrigeration was commonplace, it gained further favor in the periods of American history when segregation closed off most restaurants to the black population. Fried chicken continues to be among this region's top choices for "Sunday dinner". Holidays such as Independence Day and other gatherings often feature this dish.[15]

Since the American Civil War, traditional slave foods like fried chicken, watermelon, and chitterlings have suffered a strong association with African-American stereotypes and blackface minstrelsy.[14] This was commercialized for the first half of the 20th century by restaurants like Sambo's and Coon Chicken Inn, which selected exaggerated depictions of blacks as mascots, implying quality by their association with the stereotype. Although also being acknowledged positively as "soul food" today, the affinity that African-American culture has for fried chicken has been considered a delicate, often pejorative issue.[16] While the perception of fried chicken as an ethnic dish has been fading for several decades, with the ubiquity of fried chicken dishes in the US, it persists as a racial stereotype.[17][18]

Before the industrialization of chicken production, and the creation of broiler breeds of chicken, only young spring chickens (pullets or cockerels) would be suitable for the higher heat and relatively fast cooking time of frying, making fried chicken a luxury of spring and summer. Older, tougher birds require longer cooking times at lower temperatures. To compensate for this, sometimes tougher birds are simmered till tender, allowed to cool and dry, and then fried.[14] 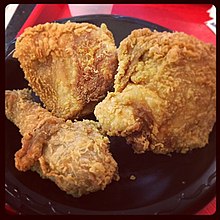 Fried chicken has been described as being "crunchy" and "juicy",[19] as well as "crispy".[20] In addition, the dish has also been called "spicy" and "salty".[21] Occasionally, fried chicken is also topped with a chili like paprika, or hot sauce to give it a spicy taste.[22] This is especially common in fast food restaurant chains such as KFC.[23] The dish is traditionally served with mashed potatoes, gravy, macaroni and cheese, coleslaw, corn and/or biscuits.[24]

The dish is renowned for being greasy, especially when coming from fast food outlets.[19] It has even been reported that some of those who enjoy eating the food limit themselves to eating it only a certain number of times a year, to keep their fat intake reasonably low.[25] Out of the various parts of the animal used in fried chicken, the wings generally tend to contain the most fat, with almost 40 grams (1.4 oz) of fat for every 100 grams (3.5 oz).[26] However, the average whole fried chicken contains only around 12% fat, or 12 grams (0.42 oz) per every 100 grams (3.5 oz).[27] As well as this, 100 grams (3.5 oz) of fried chicken generally contains around 240 calories of energy.[27]

Generally, chickens are not fried whole. Instead, the chicken is divided into its constituent pieces.[28] The white meat sections are the breast and the wings from the front of the chicken, while the dark meat sections are the thighs and legs or "drumsticks" from the rear of the chicken. The breast is typically split into two pieces, and the back is usually discarded.[29] Chicken fingers, which are boneless pieces of chicken breast cut into long strips, are also commonly used.[30]

To prepare the chicken pieces for frying, they are typically coated in a flour-based batter that may contain eggs or milk, or they may be dredged in flour or breadcrumbs. Seasonings such as salt, black pepper, chili powder, paprika, garlic powder, or onion powder can be mixed in with the flour. Either process may be preceded by marination or dipping in buttermilk, the acidity of which acts as a meat tenderizer. As the pieces of chicken cook, some of the moisture that exudes from the chicken is absorbed by the coating of flour and browns along with the flour, creating a flavorful crust.[31]

Traditionally, lard is used to fry the chicken, but corn oil, peanut oil, canola oil, soybean oil, or other vegetable oils are also frequently used.[32][33] The flavor of olive oil is generally considered too strong to be used for traditional fried chicken, and its low smoke point makes it unsuitable for use.[34] There are three main techniques for frying chickens: pan frying,[35] deep frying[36] and broasting.[37] 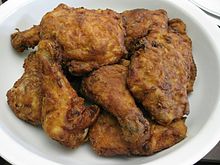 Pan frying (or shallow frying) requires a frying pan of sturdy construction and a source of fat that does not fully immerse the chicken.[38] The chicken pieces are prepared as above, then fried. Generally the fat is heated to a temperature hot enough to seal (without browning, at this point) the outside of the chicken pieces. Once the pieces have been added to the hot fat and sealed, the temperature is reduced. There is debate as to how often to turn the chicken pieces, with one camp arguing for often turning and even browning, and the other camp pushing for letting the pieces render skin side down and only turning when absolutely necessary. Once the chicken pieces are close to being done the temperature is raised and the pieces are browned to the desired color (some cooks add small amounts of butter at this point to enhance browning). The moisture from the chicken that sticks and browns on the bottom of the pan become the fonds required to make gravy.[39]

Deep frying requires a deep fryer or other device in which the chicken pieces can be completely submerged in hot fat. The process of deep frying is basically placing food fully in oil and then cooking it at a very high temperature.[38] The pieces are prepared as described above. The fat is heated in the deep fryer to the desired temperature. The pieces are added to the fat and a constant temperature is maintained throughout the cooking process.[40]

The derivative phrases "country fried" and "chicken fried" often refer to other foods prepared in the manner of fried chicken. Usually, this means a boneless, tenderized piece of meat that has been floured or battered and cooked in any of the methods described. Chicken fried steak is a common dish of that variety.[43] Such dishes are often served with gravy.[44]

In the United States, fried chicken has stereotypically been associated with African-Americans.[50] The reasons for this are various. Chicken dishes were popular among slaves before the Civil War, as chickens were generally the only animals slaves were allowed to raise on their own.[51] Minstrel shows and the film The Birth of a Nation led to a prevalent stereotype associating African-Americans with fried chicken.[52]

On two occasions the golfer Tiger Woods has been the target of remarks regarding fried chicken.[53] The first occurred in 1997 when golfer Fuzzy Zoeller said that Woods should avoid choosing fried chicken for the Masters champions' dinner the following year;[54] the second when golfer Sergio García was asked in a press conference in 2013 whether he would invite Woods to dinner during the U.S. Open to settle their ongoing feud. García, a Spaniard who was unaware of the existence of this stereotype in American society, committed a gaffe saying: "We will have him round every night . . . We will serve fried chicken", which Woods said was "wrong, hurtful and clearly inappropriate".[54] Both Zoeller and García subsequently apologized to Woods.[54]

In 2011, a Beijing restaurant named "Obama Fried Chicken" opened in reference to then President Barack Obama.[55] It faced legal action from KFC and was renamed soon afterwards.[51]

At a dinner during Black History Month, an NBC chef, Leslie Calhoun, served fried chicken.[56] The drummer of the Roots, Questlove, was angered by this and thought it both offensive and ignorant.[57]

In 2012, Burger King released a commercial which featured Mary J. Blige singing about a crispy chicken wrap. The advertisement was controversial due to the racial stereotypes surrounding fried chicken, and prompted Burger King to remove it from YouTube and Blige to apologize for appearing in it.[58]

In 2019, Will Hurd, an African-American Congressman, appeared on Real Time with Bill Maher. There, he said that while he was in the CIA he "was the dude in the back alleys at four o'clock in the morning collecting intelligence on threats to the homeland." Bill Maher responded by saying "That's where you'd collect it, huh? Wow. By the Popeyes Chicken?" Maher was accused of being racist for making that remark.[59]

Retrieved from "https://en.wikipedia.org/w/index.php?title=Fried_chicken&oldid=972433875"
Categories:
Hidden categories:
The article is a derivative under the Creative Commons Attribution-ShareAlike License. A link to the original article can be found here and attribution parties here. By using this site, you agree to the Terms of Use. Gpedia Ⓡ is a registered trademark of the Cyberajah Pty Ltd.