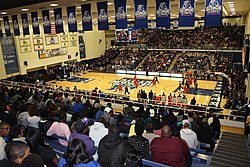 The GSU Sports Arena during a men's basketball game

The Georgia State Sports Arena consists of four stories. The gymnasium floor is on the third level and is the home court for men's and women's basketball and women's volleyball. Basketball seating is available on the third and fourth floors. Locker rooms are located on the third floor under the fourth floor seating. The Georgia State University athletics department is located on the first floor of the building. Also in the building is a Student-Athlete Learning Lab.

The main court (named the Charles "Lefty" Driesell Court for the former Panthers men's basketball coach) has a four-sided scoreboard hanging from the ceiling as well as a "Jumbotron" style video signage board on the south end wall.

Construction of the arena began in 1972 as class space for physical education classes and as a recreation center for students. Men's basketball began using it as its home court in 1973.

On December 12, 2003, the main court was named the Charles "Lefty" Driesell Court after the former men's basketball coach. A ceremony was held during the halftime of an 88-57 victory over the University of South Alabama.

Renovations in 2004 replaced the playing floor of the main court as well as painting the walls. During the 2002-03 season, a four-sided scoreboard was added hanging from the ceiling as well as a "jumbotron" style screen on the south wall. More recently, a 225 Student-Athlete Learning Lab was opened on the first floor providing athlete advisement, study halls, tutorials, and computer labs.

Prior to the 2013 men's and women's basketball seasons, the locker rooms were moved from the 2nd floor to the 3rd floor, taking up space previously used for large functions.[3] Renovations included the additions of a players lounge and conference hall, as well as stylized graphics lining the hallways and locker rooms.[4][5][6]

A new center-hung videoboard was installed during the summer of 2015 following the Panther's NCAA tournament run, along with a digital scorer's table board.[7]

On May 31, 2012, the Georgia State University athletics department released a new master plan, including renovations to the existing Sports Arena. These renovations would remove the current escalator entrance to the sports arena and replace it with a new ticket plaza. New entrances will lead to a plaza on the first floor of the arena.

The current trophy case will be replaced by a new walk of fame leading through a corridor towards the courts. Also, a new team store will replace the current administrative offices. Two new escalators and elevators will be erected at the hall of fame and team store, serving as the main entrance to the arena.

The current court will be rotated 90 degrees to allow for 700 new seats. The total seat capacity after the renovation will be 4,100, up from the current 3,400. Additional handicap, standing room only, media areas, and premium seating will set the total capacity at 5,000. Due to the rotation of the court, a full bowl will be created surrounding the court. New premium boxes will be built above the lower bowl on either side of the court, a new media area will be built, and a new PAC lounge will be included.

Lighting will be improved, and new LED message boards will surround the court. New locker rooms will be constructed, along with new restrooms and concessions facilities.[8]

Although the NCAA requires a master facilities plan for movement to the Football Bowl Subdivision (where the Panthers moved to via the Sun Belt Conference on July 1, 2013), there is currently no set date for implementation of the Sports Arena renovations.[9] Instead, the athletics department has stated that construction of these facilities will occur as soon as funding becomes available. The facilities will be funded entirely through private donations.[10] To this point, a new central hanging HD video board has replaced the old score board, and the scorer's table scrolling ad board has been replaced with a video board for the beginning of the 2015-16 basketball season.

In February 2018, The Signal reported plans of a 200,000 square foot (18,600 m2) convocation center included in the Georgia state government's 2019 fiscal year budget. If approved, the new arena would be located north of Georgia State Stadium on the corner of Fulton Street and Capitol Avenue. The new arena is planned to cost $80 million, with $60 million coming from state funding and the remainder from private funding. The new arena is planned to seat 8,000 spectators. In addition to being the new home of men's and women's basketball, the arena would also be used for commencement ceremonies, concerts, and other large events. The basketball programs' administrative offices and practice facilities would remain in the current Sports Arena. Planning of the new arena would take 12 months while construction would take an additional two years to complete.[11][12]

Retrieved from "https://en.wikipedia.org/w/index.php?title=GSU_Sports_Arena&oldid=934359601"
Categories:
Hidden categories:
The article is a derivative under the Creative Commons Attribution-ShareAlike License. A link to the original article can be found here and attribution parties here. By using this site, you agree to the Terms of Use. Gpedia Ⓡ is a registered trademark of the Cyberajah Pty Ltd.