(Redirected from Gas Natural)
Jump to navigation Jump to search 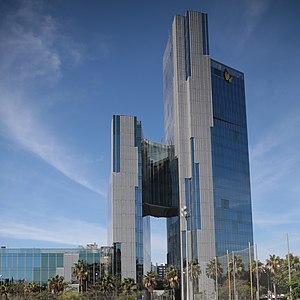 It also has operations in other countries, including: Italy, France, Germany, The Netherlands, Belgium, Mexico, Colombia, Argentina, Puerto Rico, Moldova, and Morocco.

The corporation's main interests are: the distribution of natural gas in Spain, Italy, and Latin America; the generation and commercialisation of electricity in the liberalised Spanish market (1997-2009);[3] and the management of natural gas infrastructure and shipping transport.

Gas Natural has approximately 10,000,000 energy clients worldwide. It has around 6,700 employees, of which approximately 50% work within Spain.

In June 2018, the general shareholders meeting of Gas Natural approved the change of name of the company to Naturgy Energy Group.[5]

The company's administrative headquarters complex, Gas Natural Building or Mare Nostrum Tower, is located in the La Barceloneta neighbourhood of the Ciutat Vella district in Barcelona. Its registered office is being moved to Madrid.

The skyscraper was designed in the High-tech architectural style by the EMBT Architects firm of architects Enric Miralles and Benedetta Tagliabue, and was completed in 2005.

Retrieved from "https://en.wikipedia.org/w/index.php?title=Naturgy&oldid=973797065"
Categories:
Hidden categories:
The article is a derivative under the Creative Commons Attribution-ShareAlike License. A link to the original article can be found here and attribution parties here. By using this site, you agree to the Terms of Use. Gpedia Ⓡ is a registered trademark of the Cyberajah Pty Ltd.