Jump to navigation Jump to search
For the basketball player, see Anton Gavel.

A gavel is a small ceremonial mallet commonly made of hardwood, typically fashioned with a handle. It can be used to call for attention or to punctuate rulings and proclamations and is a symbol of the authority and right to act officially in the capacity of a presiding officer.[1] It is often struck against a sound block, a striking surface typically also made of hardwood, to enhance its sounding qualities. According to tradition, Vice President John Adams used a gavel as a call to order in the first U.S. Senate in New York in the spring of 1789. Since then, it has remained customary to tap the gavel against a lectern or desk to indicate the opening and closing of proceedings, and it is also used to keep the meeting itself calm and orderly.

In Medieval England, the word gavel could refer to a tribute or rent payment made with something other than cash.[2] These agreements were set in English land-court with the sound of a gavel, a word which may come from the Old English: gafol (meaning "tribute").[2] Gavel would be prefixed to any non-monetary payment given to a lord (for example: gavel-malt) and can be found as a prefix to other terms such as gavelkind, a system of partible inheritance formerly found in parts of the UK and Ireland. A gavel may also have referred to a kind of mason's tool, a setting maul that came into use as a way to maintain order in meetings.[2]

Demeter's Manual of Parliamentary Law and Procedure states that, in addition to an optional light tap after a vote, there are three other uses of a gavel:[1]

Improper uses include banging the gavel in an attempt to drown out a disorderly member.[5] In this situation, the chair should give one vigorous tap at a time at intervals.[1] Also, the chair should not lean on the gavel, juggle or toy with it, or use it to challenge or threaten or to emphasize remarks.[1]

The chair should not be "gaveling through" a measure by cutting off members and quickly putting a question to a vote before any member can get the floor (in this connection, the chair should not use the gavel to improperly signify the end of consideration of a question).[6] The expression passing the gavel signifies an orderly succession from one chair to another.

In addition to the use above during business meetings, organizations may use the gavel during their ceremonies and may specify the number of raps of the gavel corresponding to different actions.[7][8]

The gavel is used in courts of law in the United States and, by metonymy, is used there to represent the entire judiciary system, especially of judgeship. On the other hand, in the Commonwealth of Nations and Republic of Ireland, gavels have never been used by judges, despite many American-influenced TV programmes depicting them.[9][10][11] An exception is the Inner London Crown Court, where clerks use a gavel to alert parties in court of the entrance of the judge into the courtroom.[12][13] 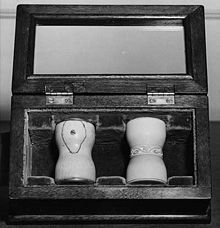 The unique gavel of the United States Senate has an hourglass shape and no handle. In 1954, the gavel that had been in use since at least 1834 (and possibly since 1789) broke when Vice President Richard Nixon used it during a heated debate on nuclear energy, despite silver plates that were added to strengthen it in 1952.[14] The Senate was unable to obtain a piece of ivory large enough to replace the gavel, so they appealed to the Indian embassy. Later that year, India's Vice President Sarvepalli Radhakrishnan visited the Senate and presented a replica of the original gavel to Nixon.[15] The replica is still in use as of 2018.[16]

The gavel of the House of Representatives, by contrast, is plain wood with a handle and is used more often and more forcefully than in the Senate. It has been broken and replaced many times.[17]

In 1955 Icelandic sculptor Ríkarður Jónsson carved the Icelandic birch gavel and striking board used at the United Nations.[18]

Retrieved from "https://en.wikipedia.org/w/index.php?title=Gavel&oldid=998222786"
Categories:
Hidden categories:
The article is a derivative under the Creative Commons Attribution-ShareAlike License. A link to the original article can be found here and attribution parties here. By using this site, you agree to the Terms of Use. Gpedia Ⓡ is a registered trademark of the Cyberajah Pty Ltd.