The Gendarmerie General Command (Turkish: Jandarma Genel Komutanlığı) is a service branch of the Turkish Ministry of Interior responsible for the maintenance of the public order in areas that fall outside the jurisdiction of police forces (generally in rural areas), as well as assuring internal security along with carrying out other specific duties assigned to it by certain laws and regulations.

The Commander of the Gendarmerie reports to the Minister of the Interior.

The Gendarmerie has its roots in the Ottoman Empire military law enforcement organization "Subaşı" (later known as the "Zaptiye"). A similar, earlier force called "Şurta" existed during the medieval Seljuq Empire.

British officers in the Ottoman Gendarmerie, 1904

As the first use of the term Gendarmerie was in the Assignment Decrees published in the years following the 1839 Edict of Gülhane, it is assumed that the Gendarmerie organization was founded after that year, but the exact date of foundation has not yet been determined. Therefore, the date on which the name Asâkir-i Zaptiye Nizâmnâmesi was adopted, June 14, 1839, is usually considered the foundation date of the Turkish Gendarmerie.[3]

After the 1877–1878 Russo-Turkish War, Ottoman prime minister Mehmed Said Pasha decided to bring police officers from Britain and France to establish a modern law enforcement organization. The Gendarmerie was used to great effect after the 1908 Young Turk Revolution, particularly in Rumelia. In 1909, the Gendarmerie was affiliated with the Ministry of War, and its name was changed to the Gendarmerie General Command (Ottoman Turkish: Umûm Jandarma Kumandanlığı‎).

Gendarmerie units continued their internal security duties as well as taking part in the conflict at various fronts as a part of the Armed Forces during World War I and the Turkish War of Independence.

In 1956, the Gendarmerie General Command was assigned the duties of protecting borders, coasts and territorial waters, and fighting smuggling, which had been previously carried out by the Gümrük Umum Kumandanlığı, under the Ministry of Customs and Monopoly. In 1957, Gendarmerie Border Units were transformed into brigades, and Gendarmerie Training Brigades were established.

In 1961, Gendarmerie Regional Commands were established. In 1968, the first Gendarmerie Aviation Unit was established in Diyarbakır under the name of Light Helicopter Company Command.

In 1974, Gendarmerie Commando Units and Gendarmerie Aviation Units took part in the Turkish invasion of Cyprus.

In 1988, the duty of protecting the land borders and ensuring their security was assigned to the Land Forces Command, but Gendarmerie General Command still holds the responsibility for some parts of the Iranian and Syrian borders and the whole Iraqi border.

In 2016, the Gendarmerie General Command was affiliated to the Ministry of Interior.[4]

In 2018, Gendarmerie Special Operations participated in Operation Olive Branch, part of the Turkish involvement in the Syrian Civil War.

The duties of the gendarmerie according to the Law No. 2803 on the Organization, Duties and Powers of the Gendarmerie; It is categorized under four main titles as judicial, military, civil and other duties.[5] 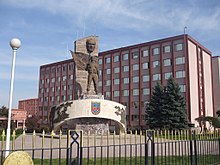 The Gendarmerie Museum is established in order to reflect the developments in periodical order beginning with the foundation of the Gendarmerie organization; to exhibit its activities, heroic deeds, services in the history; to protect all kinds of military cultural assets related to the Gendarmerie by collecting them and to transfer them to the future generations. The Gendarmerie Museum in the Beytepe Lieutenant General İsmail SELEN Quarters in Ankara and is open to public.[14]

Retrieved from "https://en.wikipedia.org/w/index.php?title=Gendarmerie_General_Command&oldid=971124507"
Categories:
Hidden categories:
The article is a derivative under the Creative Commons Attribution-ShareAlike License. A link to the original article can be found here and attribution parties here. By using this site, you agree to the Terms of Use. Gpedia Ⓡ is a registered trademark of the Cyberajah Pty Ltd.