Jump to navigation Jump to search
Military rank in US armed forces
This article is about the four-star rank. For the broader U.S. military usage, see General officers in the United States. For other uses, see General (disambiguation).

Formally, the term “General” is always used when referring to a four-star general. However, a number of different terms may be used to refer to them informally, since lower-ranking generals may also be referred to as simply “General”.

U.S. Army insignia of the rank of General. Style and method of wear may vary between the services.

U.S. Marine Corps insignia of the rank of General. Style and method of wear may vary between the services.

U.S. Air Force and U.S. Space Force insignia of the rank of General. Style and method of wear may vary between the services.
U.S. generals' flags 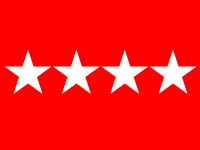 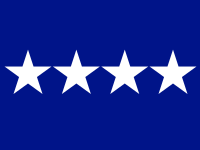 There are several exceptions to these limits allowing more than allotted within the statute.[4]

Finally, all statutory limits may be waived at the President's discretion during time of war or national emergency.[7]

Four-star grades go hand-in-hand with the positions of office to which they are linked, so the rank is temporary; the active rank of general can only be held for so long- though upon retirement, if satisfactory service requirements are met, the general or admiral is normally allowed to hold that rank in retirement, rather than reverting to a lower position, as was formerly usually the case.[8] Their active rank expires with the expiration of their term of office, which is usually set by statute.[8] Generals are nominated for the appointment by the President from any eligible officers holding the rank of brigadier general or above who meet the requirements for the position, with the advice of the Secretary of Defense, service secretary (Secretary of the Army, Secretary of the Navy, or Secretary of the Air Force), and if applicable the Joint Chiefs of Staff.[8] For some positions, statute allows the President to waive those requirements for a nominee deemed to serve national interests.[9] The nominee must be confirmed by the United States Senate before the appointee can take office and assume the rank.[8] General ranks may also be given by act of Congress but this is extremely rare. The standard tour for most general positions is three years, bundled as a two-year term plus a one-year extension, with the following exceptions:

Extensions of the standard tour length can be approved, within statutory limits, by their respective service secretaries, the Secretary of Defense, the President, or Congress but these are rare, as they block other officers from being promoted. Some statutory limits can be waived in times of national emergency or war.

Other than voluntary retirement, statute sets a number of mandates for retirement. A general must retire after 40 years of service unless he or she is reappointed to serve longer.[10] Otherwise all general officers must retire the month after their 64th birthday.[11] However, the Secretary of Defense can defer a general's retirement until the officer's 66th birthday[11] and the President can defer it until the officer's 68th birthday.[11] To retire at four-star grade, an officer must accumulate at least three years of satisfactory active duty service in that grade, as certified by the Secretary of Defense.[12]

Retrieved from "https://en.wikipedia.org/w/index.php?title=General_(United_States)&oldid=937789204"
Categories:
Hidden categories:
The article is a derivative under the Creative Commons Attribution-ShareAlike License. A link to the original article can be found here and attribution parties here. By using this site, you agree to the Terms of Use. Gpedia Ⓡ is a registered trademark of the Cyberajah Pty Ltd.