Jump to navigation Jump to search
Not to be confused with former United Transport Administration of the Country of Georgia.

The Georgia Department of Transportation (GDOT) is the organization in charge of developing and maintaining all state and federal roadways in the U.S. state of Georgia. In addition to highways, the department also has a limited role in developing public transportation and general aviation programs. GDOT is headquartered in downtown Atlanta and is part of the executive branch of state government. [2]

GDOT has broken up the state of Georgia into seven districts in order to facilitate regional development. Each district is responsible for the planning, design, construction and maintenance of the state and federal highways in their region.

The Georgia Department of Transportation plans, constructs, maintains and improves the state's road and bridges; provides planning and financial support for other modes of transportation such as mass transit and airports; provides airport and air safety planning; and provides air travel to state departments. The Department also provides administrative support to the State Road and Tollway Authority and the Georgia Rail Passenger Authority.

A majority of the Department's resources are directed toward maintaining and improving the state's network of roads and bridges. Proceeds from the state's motor fuel taxes are constitutionally earmarked solely for use on Georgia's roads and bridges. Non-road and bridge construction projects are supported by a combination of state general funds, federal funds and local funds.

The state of Georgia has 1,244 miles (2,002 km) of Interstate highways within its state lines. Georgia's major Interstate Highways are I-95, I-75, I-16, I-85, and I-20. Other important interstate highways are I-24 and I-59. I-285 is Atlanta's perimeter route and I-575 connects with counties in north Georgia on I-75 and I-675 connects to I-285 on the south side of Atlanta. I-475 is a western bypass of Macon, shortening the trip for through I-75 traffic.[5] The Georgia Department of Transportation maintains only 16 percent of the roads in the state. The other 84 percent are the responsibility of the counties and cities; 75 percent of those roads are county roads.[6]

GDOT maintains approximately 18,000 miles of state routes and has maintained this mileage cap since the early 1970's. This has led to a significant shift of road responsibility from state responsibility to local governments. This is because the state highway system has not been allowed to grow in proportion to the massive overall road system growth due to rapid population increases statewide over the past 40 years. This has left many urbanized counties forced to maintain many miles of arterial routes and a few freeways due to inability to get these roads onto the state highway system.

The Freeing the Freeways program is a project which involved widening some of the freeways in Atlanta. The project took 17 years to create, cost $1.5 billion, and doubled Atlanta's freeway lane miles from 900 to 1,851 miles (1,448 to 2,979 km). One freeway that was involved in the project was the I-75/I-85 Downtown Connector. Another project was the construction of the Tom Moreland Interchange.

Georgia boasts one of the most extensive freight rail systems in the U.S., with some 5,000 miles of track that run through almost all of the state's 159 counties. The system primarily consists of two Class 1 railroads—Norfolk Southern and CSX—and 25 shortlines.

Georgia DOT owns nearly 540 miles of light density rail line. Approximately 90 percent of the 540 miles is leased to a shortline operator. The remaining 10 percent is leased to the Georgia Department of Natural Resources for use as a bicycle and pedestrian trail, is inactive, or is not leased.

2,463 miles of the rail system are classified as "mainline track". Some Georgia mainlines transport more than 80 million gross tons per year, ranking them among the most heavily used in the country. 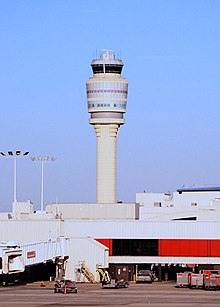 Aviation Programs is tasked to assure a safe, adequate, and well-maintained system of public-use airports, to promote and encourage the use of aviation facilities, to guide airport development, to promote viable scheduled air service throughout the state, and to foster safer operating conditions at these facilities.

Other Responsibilities Aviation Programs is responsible for inspecting and licensing all open-to-the-public general aviation airports in the state. State law requires public-use airports to have a state airport license. Licensing occurs on a biennial basis.

Aviation Programs also publishes and distributes to the airports and aviation community the Georgia Airport Directory and the Georgia Aeronautical Chart in alternating years.

Georgia was designated by the FAA as the 10th participant in the State Block Grant Program beginning October 1, 2008. This mandates the Department to accept and administer millions of dollars in federal funding for improvements at federally eligible general aviation airports. Aviation Programs assumes additional responsibility for project oversight, airport planning, compliance, and environmental review at these airports.

The Airport Development program is responsible for developing, managing, and administering programs to satisfy these goals. The Georgia Airport Aid Program is designed to provide financial assistance to communities in accomplishing capital improvement, airfield maintenance, and approach aid projects. Capital improvement projects include new, extension or widening of a runway, taxiway, or aircraft parking apron. Maintenance projects include resurfacing or reconstruction of runways, taxiways, and aprons, repair of lighting systems and approach aids, and sealing of joints and cracks on airfield pavements. Approach aid projects include the purchase and installation of glide slopes, localizers, visual guidance, and automated weather reporting equipment.

The Aviation Planning program participates in individual airport planning projects, and, on a statewide basis, maintain the Georgia Aviation System Plan, which reviews the state system of airports and make recommendations on their development that would benefit statewide development goals. We routinely maintain a statewide Airfield Pavement Management Study which evaluates the pavement at 103 airports in the state. Recommendations include a 5-year maintenance work program for each airport and documentation of the needs for state funds to maintain the airport infrastructure.

Concrete right of way marker along US 78 Business in Athens, Georgia

Georgia DOT is governed by a 14-member State Transportation Board that is elected by the Georgia General Assembly for a five-year[7] term and is headed by a commissioner chosen from among the board members.[8] The board's powers include designating which public roads are encompassed within the state highway system; approving long-range transportation plans; overseeing the administration of construction contracts; and authorizing lease agreements. Offices within the board, other than Commissioner, are Deputy Commissioner; Chief Engineer and Treasurer.[9]

The Georgia Department of Transportation has several different divisions. They include:

Retrieved from "https://en.wikipedia.org/w/index.php?title=Georgia_Department_of_Transportation&oldid=996094479"
Categories:
Hidden categories:
The article is a derivative under the Creative Commons Attribution-ShareAlike License. A link to the original article can be found here and attribution parties here. By using this site, you agree to the Terms of Use. Gpedia Ⓡ is a registered trademark of the Cyberajah Pty Ltd.