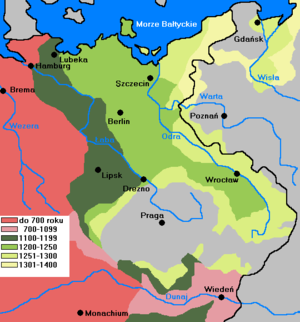 Germania Slavica, a historiographic term used since the 1950s, denotes the medieval contact zone between Germans and Slavs in Central Europe.[1]

From the late first millennium CE, Slavic tribes (collectively referred to as Wends) settled in Germania Slavica. The area underwent great social transformations associated with the influx of settlers from the West (primarily Germans) during the Ostsiedlung in the High Middle Ages.

The Germania Slavica was introduced by Wolfgang H. Fritze as a research term in the mediaeval terminology when his interdisciplinary working group (IAG) was founded in 1976. This term was first used by Walter Schlesinger in 1961, as an analogy to 1932 research term Germania Romana coined by Theodor Frings . The Germania Romana designated (in contrast to the Germania Libera)[1] [2] according to Frings, the spaces "in which German language development [...] has been determined by the influence of Roman substrates ", essentially the areas west of the Rhine and Neckar and south of the Altmühl and the Danube ( Limes ).

Accordingly, Fritze formulated in 1980: As Germania Slavica we refer to "the area of the medieval German eastern settlement in the Slavic populated areas east of the Elbe and Saale, insofar as it has been linguistically Germanized". Walter Lammers defined: “The space between the western border of the more or less permanent Slavic settlement and the eastern border of the new German tribes, as they were in the 19th and 20th centuries. Century. ”The western border was marked by Wagria, the Wendland and the Altmark, then by the Elbe and Saale and the southern border by Upper Franconia and the Upper Palatinate ( Bavaria Slavica ).

With regard to the eastern extent, Polish research has put the counter-term Slavia Germanica up for discussion, so that there are gears in the Pomeranian, Lusatian and Silesian regions.

Ultimately, however, Germania Slavica as a German-Slavic contact zone is not primarily about a room, but about the location of historical processes . It is therefore not a question of the (one-sided) representation of the German East Settlement, but of shaping the area with the involvement of the Slavic population (especially the Elbe Slavs ), both in the period before German immigration and during the high medieval expansion of the country.

Retrieved from "https://en.wikipedia.org/w/index.php?title=Germania_Slavica&oldid=969205765"
Categories:
Hidden categories:
The article is a derivative under the Creative Commons Attribution-ShareAlike License. A link to the original article can be found here and attribution parties here. By using this site, you agree to the Terms of Use. Gpedia Ⓡ is a registered trademark of the Cyberajah Pty Ltd.