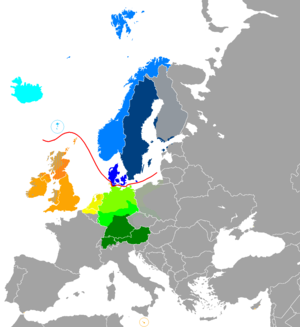 By the 1st century AD, most of what is today Germanic-speaking Europe was dominated by peoples speaking Germanic languages. These peoples were called Germani by the Romans, and the area they dominated was called Germania. In the preceding centuries, this area had expanded greatly through a series of Germanic expansions. By the 1st century AD, it stretched from the Danube in the south to the North Sea and Baltic Sea in the north, and from the Rhine in the west to beyond the Vistula in the east. The population of this area was however not entirely composed of Germanic peoples. Modern research has determined that much of the area was also inhabited by a non-Germanic indigenous population, who probably spoke a non-Germanic Indo-European language. For this reason, scholars sometimes use the term Germanic-dominated Europe for the region during this time.[a][b]

During Late Antiquity, improvements in agricultural methods resulted a massive population expansion in Germanic Europe.[4] During the Migration Period, the area of Germanic Europe was shifted towards the south and west as a result of a series of Germanic migrations.[5] Most notably, there was the Anglo-Saxon settlement of Britain, which placed this region into the orbit of Germanic Europe.[6]

Independent European countries whose population are predominantly native speakers of a Germanic language:

Retrieved from "https://en.wikipedia.org/w/index.php?title=Germanic-speaking_Europe&oldid=941781523"
Categories:
Hidden categories:
The article is a derivative under the Creative Commons Attribution-ShareAlike License. A link to the original article can be found here and attribution parties here. By using this site, you agree to the Terms of Use. Gpedia Ⓡ is a registered trademark of the Cyberajah Pty Ltd.